Train Travel in the U.S. 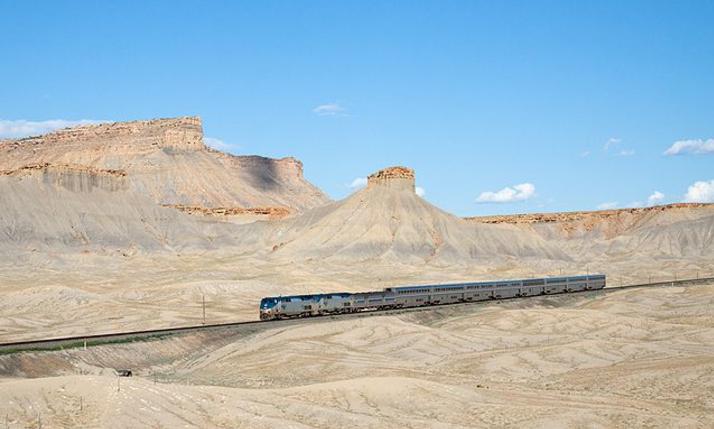 An Observation Car on the California Zephyr . 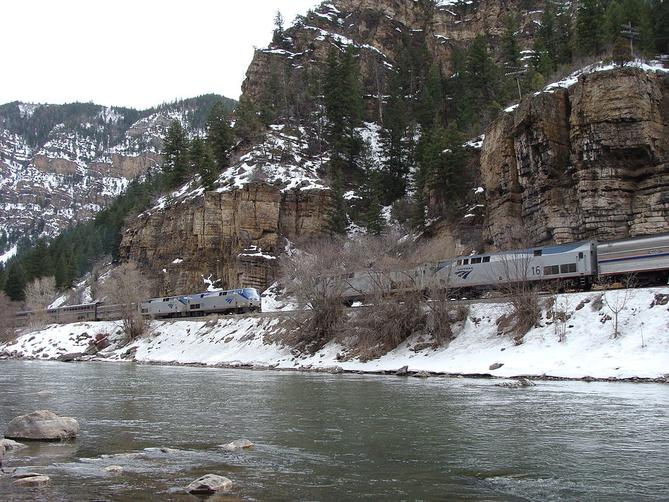 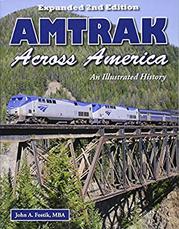 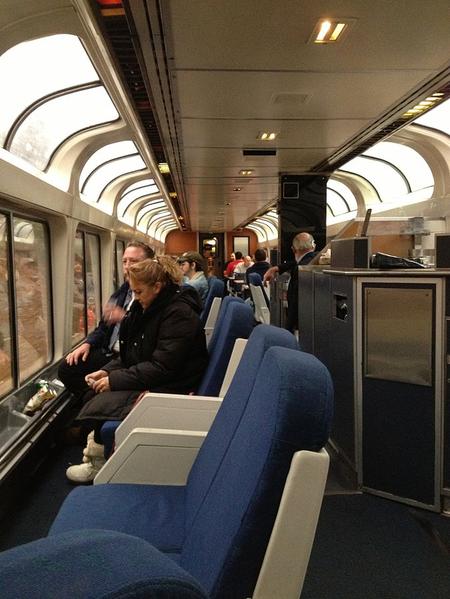 Amtrak's California Zephyr
The California Zephyr is a passenger train operated by Amtrak between Chicago, Illinois, and Emeryville, California, via Illinois, Iowa, Nebraska, Colorado, Utah, Nevada, and California. At 2,438 miles (3,924 km) it is Amtrak's longest route after the Texas Eagle.  Amtrak claims the route as one of its most scenic, with views of the upper Colorado River valley in the Rocky Mountains, and the Sierra Nevada.

Before Amtrak, the California Zephyr (the CZ, or "Silver Lady") was a passenger train operated by the Chicago, Burlington & Quincy (CB&Q), Denver & Rio Grande Western (D&RGW) and Western Pacific railroads, all which dubbed it "the most talked about train in America" on March 19, 1949, with the first departure the following day. It was scheduled to pass through the most spectacular scenery on its route in the daylight. The original train ceased operation in 1970, though the D&RGW continued to operate its own passenger service, the Rio Grande Zephyr, between Salt Lake City and Denver using the original equipment until 1983. Since 1983 the California Zephyr name has been applied to the Amtrak service, which operates daily and is a hybrid of the route of the original Zephyr and its former rival, the City of San Francisco.During fiscal year 2012, the California Zephyr carried more than 376,000 passengers, an increase of 5.9% on 2011. The train had a total revenue of $47,605,728 in 2012, a 6.4% increase on 2011.

Amtrak era
Amtrak intended to revive the California Zephyr as part its original route network in 1971, using the Burlington Northern east of Denver, the Rio Grande between Denver and Ogden, and the Southern Pacific west of Ogden, Utah. At the last minute, the Rio Grande refused to join Amtrak, fearing the new company's passenger trains would interfere with profitable freight traffic. This forced Amtrak on to the Union Pacific's Overland Route through southern Wyoming instead of Colorado. For a brief time, between the spring of 1971 and the summer of 1972, passengers traveling between Chicago and Oakland would have to travel on two different trains: the Denver Zephyr, which operated daily between Chicago and Denver, and the City of San Francisco, which operated three times a week, between Denver and the San Francisco Bay Area. Eventually, however, after several false starts, Amtrak consolidated the two trains into one, dubbed the San Francisco Zephyr, homage to both the California Zephyr and the San Francisco Chief, between Chicago and Oakland. The Rio Grande continued to operate the Rio Grande Zephyr between Denver and Ogden.

In 1983 the D&RGW elected to join Amtrak, citing increasing losses in passenger operations. Amtrak re-routed the San Francisco Zephyr over the D&RGW's Moffat Subdivision between Denver and Salt Lake City, its original preference from 1971. The change was scheduled for April 25, but a mudslide at Thistle, Utah closed the line and delayed the change until July 16. With the change of route, Amtrak renamed the train as the California Zephyr. The modern California Zephyr uses mostly the same route as the original east of Salt Lake City. However, the route in Nevada and California is essentially the route of the former City of San Francisco. The California Zephyr operates on the former Western Pacific's Central Corridor from Salt Lake City west until central Nevada, changing to the former Southern Pacific's Overland Route by Winnemucca. As the Union Pacific Railroad uses directional running across central Nevada, the spot the train switches lines depends on the direction of travel.

A small note in the July 2010 Trains mentioned that this train is listed not only for route improvement, but to host a second route, the discontinued Desert Wind route. The following is what is listed for the Zephyr route:

Possible equipment upgrades similar to that of the Empire Builder, possibly regardless if the first change is successful or not.

Route description
The west-bound train is Amtrak number 5 (eastbound, it is number 6). Upon leaving Chicago Union Station, the train travels along the Metra BNSF Railway Line, with an intermediate stop in Naperville, Illinois.

After passing through Aurora, Illinois, the train passes through the seemingly endless corn, soybean fields and small farming towns of Illinois and Iowa. The route crosses into Iowa at the Burlington Rail Bridge across the Mississippi River in Burlington, Iowa, then into Nebraska between Council Bluffs and Omaha. Overnight, and into the early morning, the train traverses Nebraska and northeastern Colorado, before making a morning arrival into Denver.

At Denver the train departs BNSF Railway-owned track. From Denver west, the train runs along the Union Pacific Railroad's Central Corridor. The scenery changes dramatically departing Denver as the train climbs the Rocky Mountains. After going through the Tunnel District, the line crosses the Continental Divide via the 6.2 mile-long Moffat Tunnel under James Peak. The tracks then follow the Colorado River, through the transition from a narrow, whitewater river (popular with rafters, who habitually moon the train as it passes) to a much wider stream past Glenwood Canyon and Interstate 70 toward Grand Junction. The train finally departs the now much larger Colorado River after exiting Ruby Canyon, which is also where the train enters Utah.

In Utah the train follows the southern rim of the Book Cliffs to their end near Helper. The train then crosses the Wasatch Mountains, cresting at Soldier Summit. After passing the Wasatch the train arrives at the Wasatch Front where most of the population of Utah is located.

Once the train reaches Salt Lake City the train loosely follows Interstate 80 until the terminus of the train in California. Both the freeway and railroad pass along the south shore of the Great Salt Lake and across the Bonneville Salt Flats towards Nevada. After crossing the Utah/Nevada state line at Wendover, Utah/West Wendover, Nevada, the route passes the Toano Range, via Silver Zone Pass, across the Goshute Valley, tunnels under the Pequop Mountains and then skirts the northern edge of the Ruby Mountains.

The train first reaches the Humboldt River near Wells, which the train loosely follows until the river's end in the Humboldt Sink near Lovelock. The tracks cross the center of the Forty Mile Desert, on the other side of this desert valley is the Truckee River which provides the train's path to Reno and up the Sierra Nevada in California.

In California, the train crests the Sierra Nevada at Donner Pass and, after rounding Donner Lake, descends following a high ridge between the American and Yuba Rivers, through Emigrant Gap. Eventually, the California Zephyr reaches the lowland areas of the California Central Valley, and then along the San Pablo Bay, with stops in Sacramento and Davis. It crosses the Benicia Bridge and has stops in Martinez and Richmond. Then, the trip ends in Emeryville, a suburb of Oakland. From Emeryville the free Emery Go Round shuttle connects passengers to the Bay Area Rapid Transit (BART) system, or a Thruway Motorcoach provides connecting service to San Francisco's Embarcadero (with sweeping city views from the San Francisco-Oakland Bay Bridge along the way).

The original California Zephyr used the Feather River Route as its path through the Sierra Nevada, and served different cities west of Winnemucca, Nevada. Instead of passing through Reno, the original Zephyr was routed via Gerlach, Nevada and in California passed through Portola, Oroville, Sacramento, Stockton and Pleasanton before arriving at the Oakland depot where a ferry service was available to San Francisco. The Feather River Route is still in use for freight; however, anyone wishing to see this portion of the original route must now use State Route 70 which runs parallel to the old Western Pacific track.