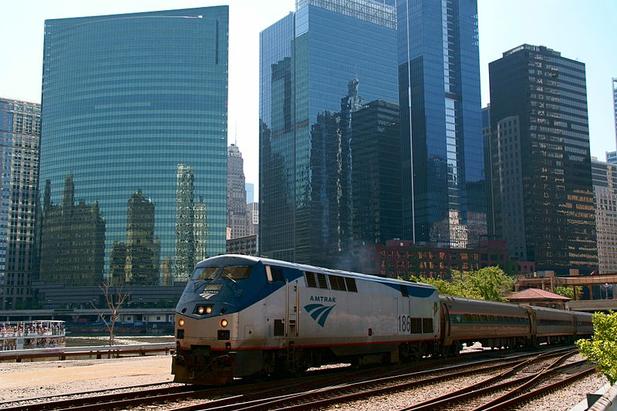 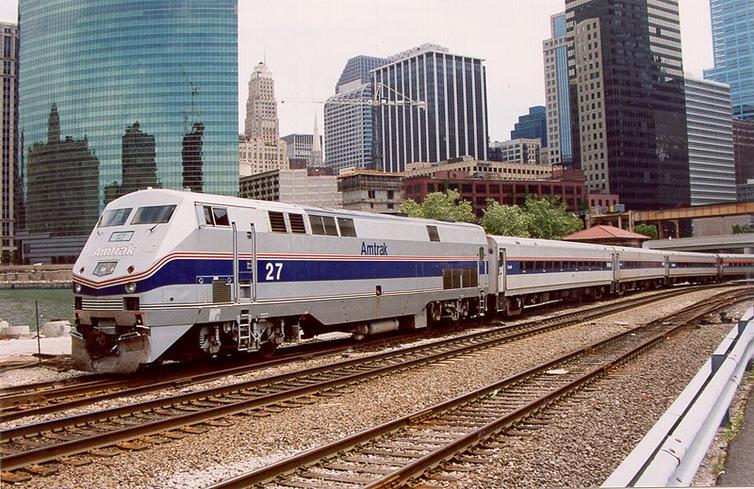 Amtrak train on the Hiawatha Service route departs Chicago from Union Station in May of 2011. 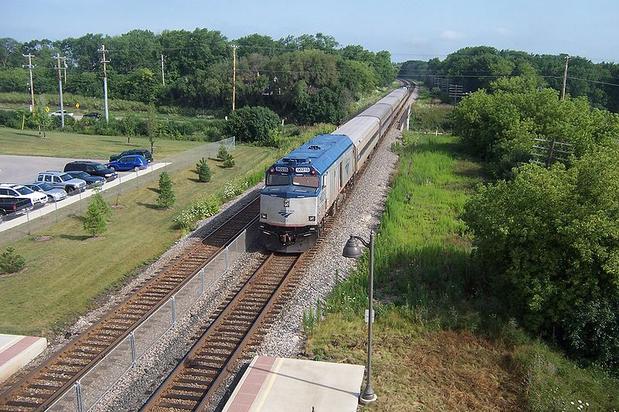 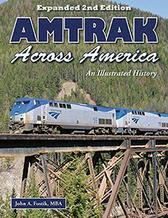 Amtrak P42 No. 27 with Hiawatha Service near Lake St. Tower in Chicago, September 2001.

An Amtrak train departs Sturtevant northbound to Milwaukee, as seen from the station bridge in 2008.

Hiawatha Service
Hiawatha Service, or Hiawatha, is the name of an 86-mile (138 km) train route operated by Amtrak on the western shore of Lake Michigan, although the name was historically applied to several different routes that extended across the Midwest and to the Pacific Ocean. As of 2007, fourteen trains (seven round-trips, six on Sunday) run daily between Chicago, Illinois, and Milwaukee, Wisconsin, making intermediate stops in Glenview, Illinois, Sturtevant, Wisconsin, and General Mitchell International Airport. The line is partially supported by funds from the state governments of Wisconsin and Illinois.

The service carried over 800,000 passengers in fiscal year 2011, a 4.7% increase over FY2010. Revenue during FY2011 totaled $14,953,873, a 6.1% increase over FY2010. It is Amtrak's ninth-busiest route, and the railroad's busiest line in the Midwest. Ridership has been steadily increasing, with 8 of the last 9 years showing ridership increases as of 2013. Ridership per mile is also very high, exceeded only by the Northeast Regional and the Capitol Corridor. A one-way trip between Milwaukee and Chicago takes about 90 minutes. In the 1930s the same trip took 75 minutes on the Chicago, Milwaukee, St. Paul and Pacific Railroad's Hiawatha. In 2014, free WiFi service was added to the Hiawatha.

The Hiawatha Service is the second-shortest route on the Amtrak system, with the first being the New Haven–Springfield Shuttle.

History
Milwaukee Road
Historically, the Hiawathas were operated by the Chicago, Milwaukee, St. Paul and Pacific Railroad (also known as the "Milwaukee Road") and initially traveled from Chicago to the Twin Cities. The first Hiawatha trains ran in 1935. By 1946, there were actually four routes carrying the Hiawatha name: Chicago–Minneapolis, Chicago–Omaha, Chicago–Wausau–Minocqua, and Chicago-Minneapolis-Seattle.

The Hiawathas were among the world's fastest trains in the 1930s and 1940s, and these trains reached some of their peak speeds on this stretch, directly competing with trains from the Chicago and North Western Railway which ran on roughly parallel tracks. A 90-minute non-stop service between Chicago and Milwaukee was first introduced in the mid-1930s, and this later fell to 75 minutes for several years. A self-imposed 100 miles per hour (161 km/h) speed limit was routinely exceeded by locomotive engineers, until the Interstate Commerce Commission rules imposed a stricter limit of 90 mph (145 km/h) in the early 1950s, and the train slowed to a schedule of 80 minutes, though an added stop in Glenview also contributed to a longer travel time. Ultimately, the speed limit fell to 79 mph (127 km/h) in 1968 because of signaling changes, and the scheduled duration went back to 90 minutes end-to-end.

Amtrak
Under Amtrak, which assumed control of most intercity passenger rail service in the United States on May 1, 1971, the Hiawatha name survived in two forms. The first was a Chicago–Milwaukee–Minneapolis service, known simply as the  Hiawatha. This would be renamed the Twin Cities Hiawatha, then extended to Seattle and renamed the North Coast Hiawatha. This service ended in 1979.

A resurfacing project on Interstate 94 led to a three-month trial of service west of Milwaukee to Watertown, Wisconsin  beginning on April 13, 1998. Intermediate stops included Wauwatosa, Elm Grove, Pewaukee, and Oconomowoc. Amtrak extended four of the six daily Hiawathas over the route. The Canadian Pacific Railway, which owned the tracks, estimated that the route would require between $15–33 million in capital investment before it could host the extended service permanently. Money was not forthcoming and service ended July 11. The three-month trial cost $1.4 million and carried 32,000 passengers.

In 2005, another station opened on the line, the Milwaukee Airport Railroad Station at General Mitchell International Airport. The expansion was intended to facilitate travel to and from the airport, with shuttles running between the station and the main terminal. The new station also gave residents on the south side of Milwaukee easier access to the service, along with an alternative to the central station in downtown, which is now fully accessible after completion of the Marquette Interchange. The station was primarily funded and is maintained by the Wisconsin Department of Transportation.

It is proposed that the Hiawatha Service, along with the Empire Builder would shift one stop north to North Glenview in Glenview, Illinois. This move would eliminate lengthy stops which block traffic on Glenview Road. This move would involve reconstruction of the North Glenview station to handle the additional traffic, and depends on commitments from Glenview, the Illinois General Assembly, and Metra.

Future expansion
In 2009, Wisconsin applied for funding from an $8 billion pool allocated for rail projects under the American Recovery and Reinvestment Act, and the Chicago–Milwaukee–Madison–Minneapolis/St. Paul corridor was allocated $823 million. $810 million of that was to support extending Amtrak services to Madison, while $12 million would have been used to upgrade the line between Chicago and Milwaukee, and an additional $600,000 was granted to study future alignments to the Twin Cities.

The Madison extension was initially planned to include stops in Brookfield, Oconomowoc, and Watertown, but Oconomowoc and Brookfield were reluctant to move forward with station planning due to cost concerns. The Wisconsin Department of Transportation (WisDOT) dropped Oconomowoc from the planned route in August 2010, and Brookfield was waiting to see the outcome of elections in November before making a decision on whether to build a station. The nearby cities of Hartland and Wauwatosa had expressed interest in hosting stations. The extension was expected to begin service by 2013.

The project became a political issue in the 2010 Wisconsin gubernatorial election. Republican candidate Scott Walker promised he would stop the project and return the money the state received if elected. When asked whether it would be realistic to stop work, Governor Doyle expressed pessimism and said in part:

At the end of October 2010, Wisconsin governor Jim Doyle and the federal government signed an agreement that bound the state to spend the federal funds granted to construct the route, regardless of the results of the 2010 gubernatorial election. On November 4, two days after Scott Walker won the gubernatorial election, however, Doyle ordered work on the line to be temporarily halted, and on November 9 said that he planned to leave the choice of whether or not to operate the train to Walker.

On December 9, 2010, U.S. Transportation Secretary Ray LaHood announced that much of the $810 million that Wisconsin was supposed to get would be redistributed to other states, including California, Florida and Washington.

Equipment
Two trainsets are required to operate the service. The usual Hiawatha train sets are formed of one Siemens SC-44 locomotive on the northward end, an EMD F40PH "cabbage car" on the southward end, and six Horizon Fleet 68-seat coaches. Cars at each end are designated as "quiet" cars with limitations placed on cell phone usage and loud conversations. During winter months, an Amfleet coach is normally used on each end in lieu of a Horizon coach to serve as quiet cars.

On July 17, 2009, the State of Wisconsin announced it would purchase two new train sets from Spanish manufacturer Talgo in preparation for the enhanced-speed service that received funding in early 2010. Governor Scott Walker rejected the federal funding and cancelled the project. Talgo opened a manufacturing plant in Milwaukee, Wisconsin to construct the trainsets for the Hiawatha Service, and the company hoped the plant would also build trains for future high-speed lines in the region. The two sets built were stored in the former Talgo plant until May 2014, when Amtrak moved them to its maintenance facility near Indianapolis, Indiana. They will remain stored there pending their possible use on other Amtrak routes.

The non-powered tilting trainsets are 14 cars long including a cab car, eleven coaches (five of which have restrooms), one bistro car, and one end car including a bicycle rack. The cars wear a red-and-white livery in homage to the University of Wisconsin. The trains would have initially been pulled by the same GE Genesis locomotives used at the time, which have a top speed of 110 mph.