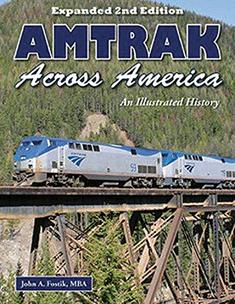 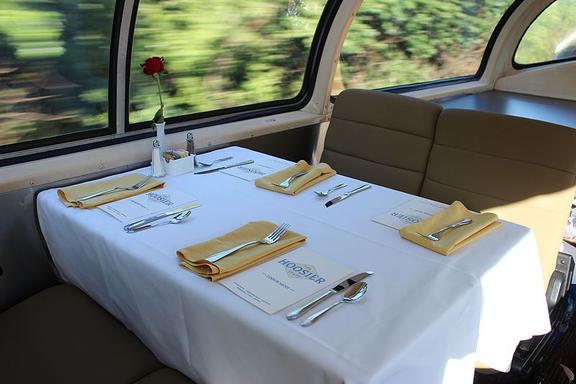 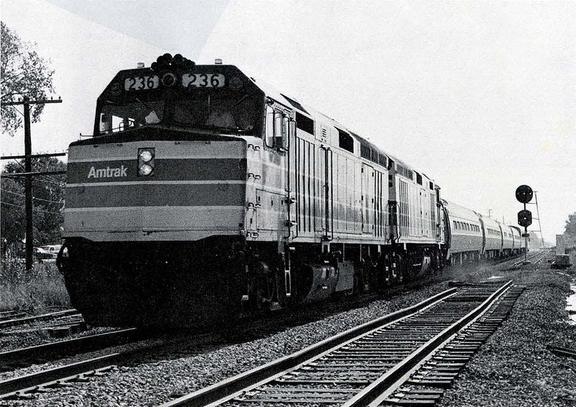 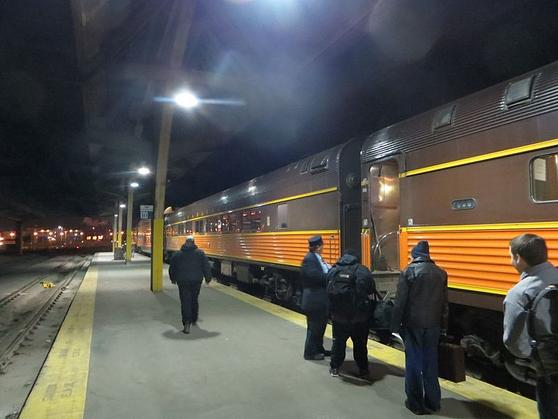 The Hoosier State with Iowa Pacific equipment at Indianapolis in February of 2017.

The Hoosier State passing through Shelby, Indiana on June 24, 2011. Note the Chase St. signal box on the CSX line. The mixed consist - a Superliner, baggage car and Horizon Fleet coaches - is typical for the Hoosier State which serves as Amtrak's "hospital train," ferrying equipment to and from the shops at Beech Grove, Indiana.

Hoosier State
The Hoosier State is an Amtrak passenger train that provides service on a 196-mile (315 km) route between Chicago and Indianapolis. It runs on the four days each week that the Cardinal does not run – departing Indianapolis Sunday, Tuesday, Wednesday, and Friday mornings and departing Chicago on Sunday, Monday, Wednesday, and Friday afternoons – giving the Chicago–Indianapolis market daily rail service.

Amtrak has announced that all Hoosier State service after June 30, 2019 will be suspended after funding for the train was not written into Indiana's 2019 state budget plan. The Cardinal line will continue running between Chicago and Indianapolis three days per week.

History
Prior to Amtrak, the Chicago–Indianapolis market was served by several daily trains, the Pennsylvania Railroad's South Wind and Kentuckian, and the New York Central's James Whitcomb Riley, Indianapolis Special, and Sycamore. There is a name antecedent to the train. The Monon Railroad ran The Hoosier daily between Chicago and Indianapolis. With the creation of Amtrak, riders were served by the South Wind and the George Washington/James Whitcomb Riley. However, with Penn Central's financial instability, track maintenance was rare, and Amtrak shifted both trains to other routes through Indiana, leaving Indianapolis to be served only by the National Limited (formerly the Spirit of St. Louis), which ran between New York and Kansas City.

The National Limited's discontinuance in 1979 severed Indianapolis from the national rail network, and isolated Amtrak's Beech Grove Shops in the Indianapolis suburb of Beech Grove. The passenger carrier had been using the National Limited to ferry railroad cars to and from its shops; it was forced to run special trains to Indianapolis instead. The first northbound Hoosier State on October 3, 1980. Until 1994, the Hoosier State had a section of on-street running in Lafayette, Indiana.

On October 16, 2008, the Passenger Rail Investment and Improvement Act (PRIIA) was signed into law, requiring states to bear the operating and capital costs of intercity rail passenger service on Amtrak routes of not more than 750 mi (1,210 km) within 5 years. At a length of 196 mi (315 km), the Hoosier State was affected by this provision of PRIIA, and the State of Indiana became responsible for funding the Hoosier State beginning on October 1, 2013.

Faced with termination of a service that would have left the Chicago–Indianapolis corridor with only a tri-weekly train service, state and local officials arrived at a deal to share the $3,000,000 annual cost of the service, becoming the last state in the nation to arrive at a deal to save its short-distance train line on October 15, 2013. Operating costs above ticket revenue continue to be covered by the Indiana Department of Transportation and communities along the route.

Indiana sought alternatives to Amtrak operation and, on June 24, 2014, selected Corridor Capitol, a Chicago-based rail passenger services development company, as its preferred vendor to manage and operate the service. Planning was underway for the company to take over the service as early as October 1, 2014. However, Corridor Capitol did not meet that deadline and Indiana Department of Transportation (INDOT) discontinued negotiations with the company in November 2014. Amtrak continued to operate the train service under short-term contract extensions while the state considers alternative vendors.

On March 6, 2015, INDOT announced that the Hoosier State would discontinue service on April 1, 2015. The decision was made due to regulations of the Federal Railroad Administration that would have required the state of Indiana to act as a rail carrier, despite the state owning no tracks or trains, which – according to INDOT – would have increased the cost to Indiana taxpayers for no additional benefit. After Indiana appealed to the FRA, the train's operation was extended to April 30, while Amtrak continued to operate the Hoosier State under a short-term agreement while negotiations continued.

On August 2, 2015, INDOT contracted with both Iowa Pacific and Amtrak in order to continue the Hoosier State, with Iowa Pacific responsible for providing and maintaining equipment, food service, and marketing, and Amtrak responsible for providing ticketing services and train operating crews (engineers, assistant engineers, conductors, and assistant conductors). The contract had four option years.

Once the service improvements instituted by Iowa Pacific took hold, including the addition of full-service dining, onboard Wi-Fi, business-class service, and a dome car, ridership began increasing and was up 5.8% in July 2016 over the previous July, with FY 2016 (October 2015–July 2016) revenues up 32.8% from the prior year.

On January 30, 2017, INDOT announced that Iowa Pacific was no longer able to fulfill the contract and had asked to be released from the contract early, prior to its original end date of June 30, 2017. As a result, the equipment and personnel provided by Iowa Pacific were withdrawn and replaced by Amtrak equipment and on-board services personnel in advance of March 1 run of the westbound train from Indianapolis.

Service cancellation and replacement
In February 2019, Indiana governor Eric Holcomb proposed a budget that does not include funding for the Hoosier State. Holcomb said that the train did not have enough ridership to justify a subsidy. Environmentalists were disappointed by the decision, indicating that the loss of the train service would increase the use of passenger cars by citing a 2016 Amtrak survey that found 57 percent of passengers in Indiana would drive to their destination if the service was cancelled. On April 8, 2019, Amtrak announced that unless state funding was restored, the Hoosier State would end on June 30, 2019. Passengers who already purchased Hoosier State tickets for travel after that date will be compensated with Cardinal tickets. The budget passed on April 24, without Hoosier State funding.

In May 2019, a private transportation company, OurBus, announced plans to start a two-month pilot of daily round trip service from Indianapolis to Chicago to fill the gap left by the Hoosier State. OurBus, will charge a $10 introductory rate before raising fares to between $25 and $35. The four initial stops on the OurBus route replacing the Hoosier State besides Indianapolis and Chicago are Zionsville and Lafayette in Indiana. Other stops along the route will be added if at least 100 people make the request. Gold Shield Transportation is contracted to provide the bus service.

Train consist
The standard Hoosier State consist is two coaches (generally Amtrak's short-distance Horizon equipment) and a Horizon or Amfleet cafe car. In addition to standard food service, the cafe car allows for Business Class seating and complimentary WiFi. Motive power is commonly a General Electric Genesis P42DC locomotive. As the train is often used to shuttle equipment from the Beech Grove Shops to Chicago, deadhead equipment of all types can often be found in the consist as well. After Amtrak resumed operations in March 2017, the Great Dome car Ocean View was added. 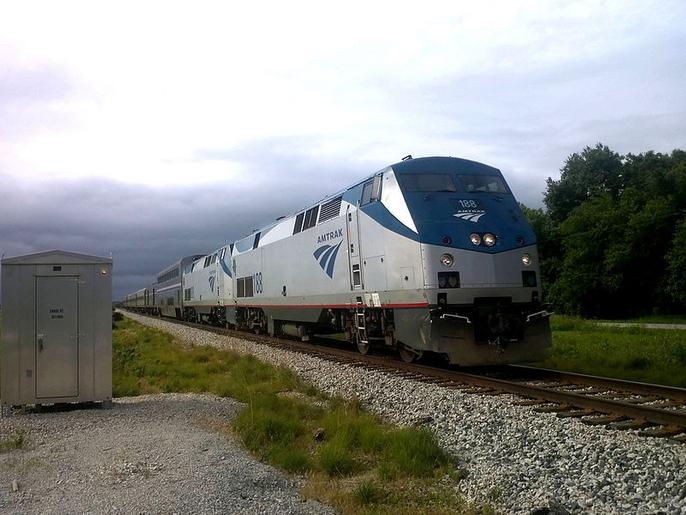