A Lincoln Service departs Chicago in May 2009. Directly behind is the Sears Tower (now Willis). 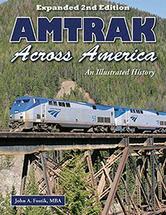 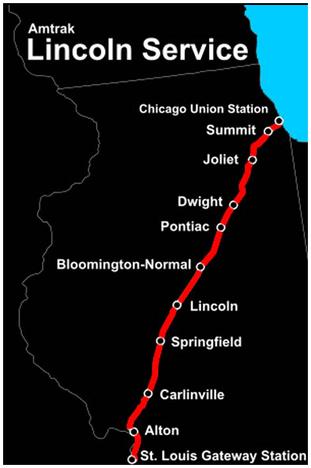 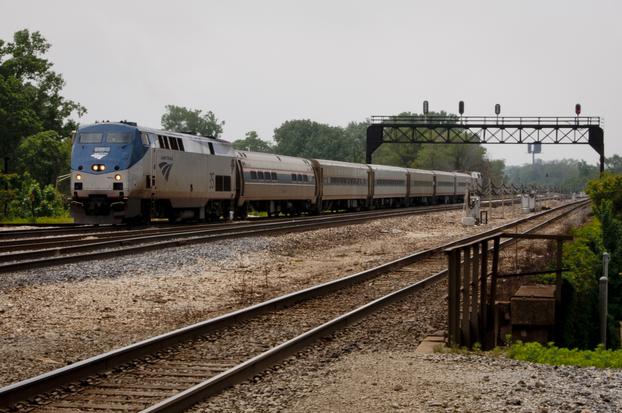 Lincoln Service
The Lincoln Service is a 284-mile (457 km) higher-speed rail service operated by Amtrak that runs between Chicago, Illinois, and St. Louis, Missouri. The train is a part of the Illinois Service and is partially funded by the Illinois Department of Transportation. The train uses the same tracks as Amtrak's Texas Eagle.

The Lincoln Service is a re-branding of the former State House route. The train route was originally run by the Alton Railroad, which merged with the Gulf, Mobile and Ohio Railroad (GM&O) in 1947. By the time the GM&O merged with the Illinois Central Railroad in 1972, Amtrak had taken over passenger service.

As of 13 September 2017, the travel time from Chicago to St. Louis was 5 hours 30 minutes - 35 minutes slower than the Illinois Central Railroad operated its express trains over the same route during the 1930s.

Upgrades
As a result of continuing upgrades on the line between Chicago and St. Louis, two additional trains daily began running on October 30, 2006, for a total of five trains daily, including the Texas Eagle and Ann Rutledge which terminated beyond St. Louis, along with the rebranding of the State House service as part of the Lincoln Service. From April 2007 the Ann Rutledge operated only between Kansas City and St. Louis where it connected to the Lincoln Service trains; Amtrak discontinued the name altogether in 2009.

In July 2010, the state of Illinois and the Union Pacific Railroad reached an agreement under which track speeds between Dwight and Alton, Illinois were to be raised to as high as 110 miles per hour (180 km/h). This speed will cut the travel time between Chicago and St. Louis by 90 minutes, bringing the trip to under four hours. The first track upgrade construction was planned to be between Alton and Lincoln, Illinois and was projected to cost $98 million. The construction on this stretch began on September 17, 2010 in Alton and was completed in 2011. Most of the funding came from $1.1 billion in stimulus money for Illinois high-speed rail from the American Recovery and Reinvestment Act of 2009. The remainder of this grant, as well as $400 million in funding from the state of Illinois, was used to complete a high-speed rail corridor for the remaining portions of the St. Louis–Chicago track. Senator Dick Durbin suggested the Dwight–Alton upgrades would create some 900 jobs, while the overall project could generate 24,000.

On March 22, 2011, an announcement was made in Chicago that an additional $685 million would be used to upgrade trackage and grade crossings between Dwight and Lincoln. Construction on the improvement project began on April 5, 2011.

Although much of track upgrade work was completed between 2010 and 2012, there are additional constructions including second trackage, bridge replacement and rehabilitation, drainage improvements, and grade crossings and signal improvements before the full 110-mile-per-hour (180 km/h) service can be fully operated on this route. After the completion of all required improvements on the first 15-mile (24 km) segment between Dwight and Pontiac, Illinois was completed, Amtrak started the higher-speed rail service with top speeds of 110 miles per hour (180 km/h) on that segment in November 2012. The entire section between Alton and Joliet is expected to have 110-mile-per-hour (180 km/h) operation by 2017.

The slowest portion of the corridor is the segment between Chicago and Joliet, but improving this would require an additional $1.5 billion investment. Two projects proposed from the Chicago Region Environmental and Transportation Efficiency Program (CREATE) would remove two diamond crossings and construct an overpass to increase train speed and eliminate delays. One project is in the preliminary design phase while the other is unfunded.

Train
A Lincoln Service train consists of the following: 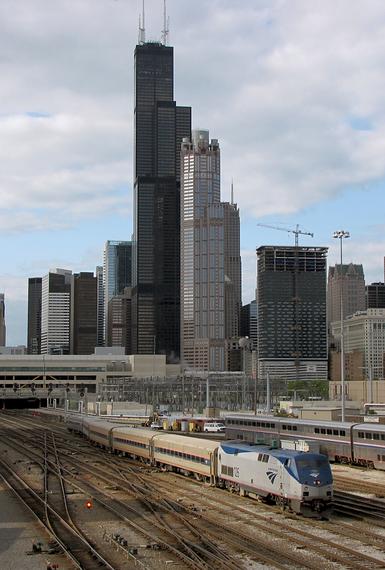