Pere Marquette
The Pere Marquette is a passenger train operated by Amtrak as part of its Michigan Services on the 176-mile (283 km) route between Grand Rapids, Michigan, and Chicago, Illinois. It is funded in part by the Michigan Department of Transportation and is train 370 eastbound and train 371 westbound.

The train is named for a named train of the defunct Pere Marquette Railway, and in turn for Pere Marquette, Michigan, an early name for Ludington. The town was named for Father Jacques Marquette, a French explorer of the Great Lakes region.

The Amtrak years
Amtrak revived the name for its Grand Rapids–Chicago service on August 5, 1984, with financial support from the state of Michigan. Initially it served Chicago, Hammond–Whiting, New Buffalo, St. Joseph, Bangor, Holland and Grand Rapids. Service at Hammond–Whiting ended April 29, 2001, (other trains still stop there). Service at New Buffalo ended October 26, 2009, when a new station opened on a different alignment.

2007 crash
On November 30, 2007, the southbound Pere Marquette collided with a Norfolk Southern freight train in Chicago, injuring 30 people. The National Transportation Safety Board (NTSB) determined that the probable cause of the collision was the failure of the Amtrak engineer to interpret the signal at Englewood interlocking correctly and Amtrak's failure to ensure that the engineer had the competence to interpret signals correctly across the different territories over which he operated. The NTSB released its findings on the crash on March 31, 2009.

On-time performance
During 2008, the on-time performance of train 370 (Chicago-Grand Rapids) was 33.6%, of train 371 (Grand Rapids-Chicago) 13.5%. By September 2010, these figures had changed to 63.3% and 13.3% respectively. Amtrak owns 10 miles (16 km) of this line, freight railroads CSX and Norfolk Southern the remainder. Track and signal delays and freight train interference make up the majority of delays.

Station stops
In October 26, 2009, the New Buffalo Amtrak station was relocated from the CSX trackage to the Amtrak-owned alignment closer to the shore of Lake Michigan. This new station is ADA-accessible and has a more extensive shelter. As a result, the Pere Marquette no longer stops in New Buffalo, which is served by Wolverine and Blue Water trains. The Pere Marquette made a special round trip train to/from Harbor Shores Golf Course for the 2018 Senior PGA Championship. This special train made an additional stop at the Hammond/Whiting station and terminated at Benton Harbor-Golf Course station, a few blocks away from Harbor Shores. 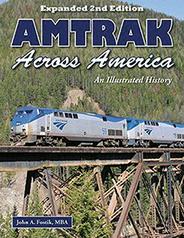 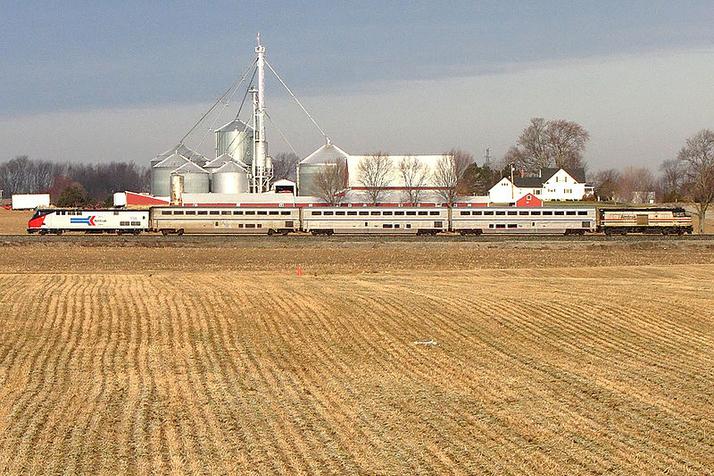 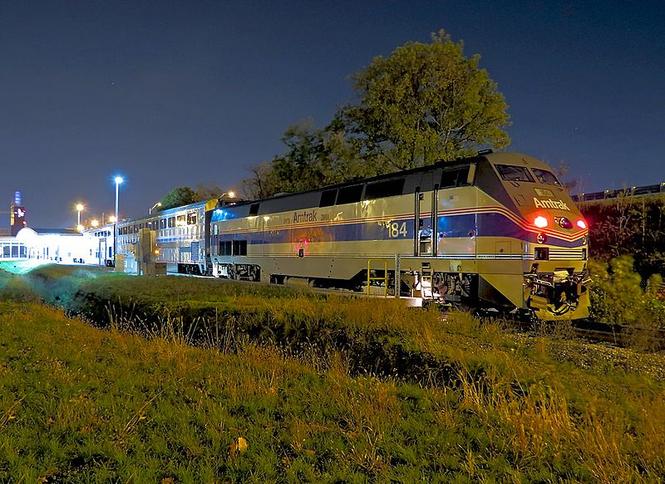 Amtrak P42DC locomotive No. 184 in Phase IV heritage paint scheme on the Pere Marquette at Grand Rapids station in October 2015.