A Santa Fe Railroad brakeman atop a train that has paused at Cajon, California, to cool its brakes after descending Cajon Pass in March 1943. 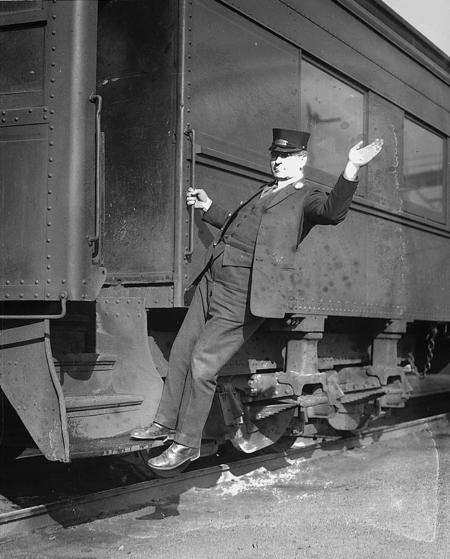 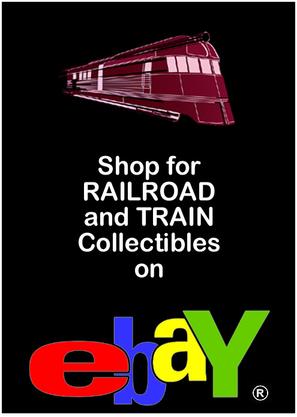 Brakeman
A brakeman is a rail worker whose original job was to assist the braking of a train by applying brakes on individual railcars. The earliest known use of the term to describe this occupation occurred in 1833. The advent of air brakes, with brakes on every railcar which could be controlled by the driver, made this role redundant, although the name lives on in the United States where brakemen carry out a variety of functions both on the track and within trains.

In the United States, the brakeman was a member of a railroad train's crew responsible for assisting with braking a train when the conductor wanted the train to slow down or stop. A brakeman's duties also included ensuring that the couplings between cars were properly set, lining switches, and signaling to the train operators while performing switching operations. The brakemen rode in the caboose, the last car in the train, which was built specially to allow a crew member to apply the brakes of the caboose quickly and easily, which would help to slow the train. In rare cases, such as descending a long, steep grade, brakemen might be assigned to several cars and be required to operate the brakes from atop the train while the train was moving. By the start of the 20th century, some local U.S. labor laws noted that enough brakemen would be staffed on every train such that a brakeman would be responsible for no more than two cars. Brakemen were also required to watch the train when it was underway to look for signs of hot boxes (a dangerous overheating of axle bearings) or other damage to rolling stock, as well as for people trying to ride the train for free and cargo shifting or falling off.

A brakeman's job was historically very dangerous with numerous reports of brakemen falling from trains, colliding with lineside structures or being run over or crushed by rolling stock. As rail transport technology has improved, a brakeman's duties have been reduced and altered to match the updated technology, and the brakeman's job has become much safer than it was in the early days of railroading. Individually operated car brakes were replaced by remotely-operated air brakes, eliminating the need for the brakeman to walk atop a moving train to set the brakes. Link and pin couplings were replaced with automatic couplings, and hand signals are now supplemented by two-way radio communication.

As of 2012, 24,380 brakeman jobs were staffed in the U.S., with 93% of them employed in the rail transport industry with much of the remainder employed by supporting companies. By 2016, the total number had dropped to 19,860, with the highest employment rates in Texas, Missouri, Pennsylvania, Illinois and Georgia, respectively.

Duties today
Freight and yard crews consisting of conductor, engineer, and brakeman usually employ the brakeman in throwing hand operated track switches to line up for switching moves and assisting in cuts and hitches as cars are dropped off and picked up. A brakeman is sometimes seen as an assistant to the conductor in a train's operations.

In passenger service, the brakeman (called trainman or assistant conductor) collects revenue, may operate door "through switches" for specific platforming needs, makes announcements, and operates trainline door open and close controls when required to assist the conductor. A passenger service trainman is often required to qualify as a conductor after 1 to 2 years experience. The rear end trainman signals to the conductor when all the train's doors are safely closed, then boards and closes his/her door. 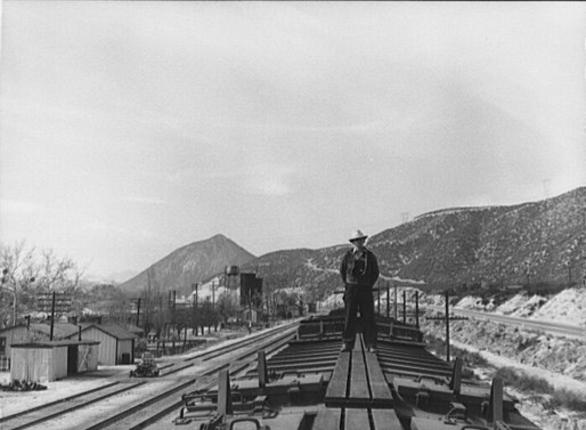