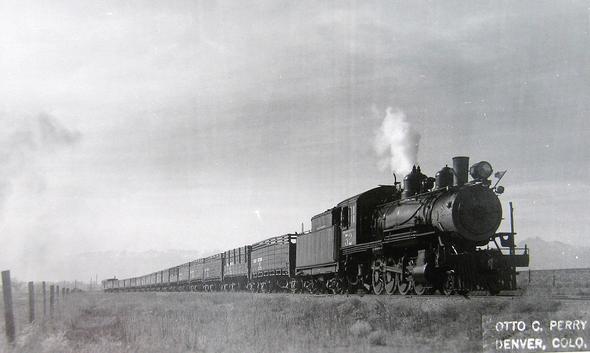 Postcard photo of Great Western locomotive No. 52 at an unnamed location. The Great Western Railway of Colorado (reporting mark GWR) operates about 80 miles (129 km) of track in Colorado and interchanges with the Union Pacific Railroad as well as the BNSF Railway. It is a currently a subsidiary of OmniTRAX but was founded in 1901 to serve the Great Western Sugar Company and other sugar, beet, and molasses companies in Colorado. It also operated passenger services from 1917 to 1926. Their route consists of a line from Loveland to Johnstown, Colorado, where it splits to Miliken and Longmont. Going north out of Kelim is Windsor where once again the line splits to go to their industrial park and Greeley, or Fort Collins. It has since expanded service to include customers such as Anheuser-Busch, Eastman Kodak and Simplot. The photo was taken by noted railroad photographer Otto Perry. Perry earned his living as a mailman in Denver; photographing trains was a hobby he pursued for many years. Perry was also known to travel outside of the Denver area to photograph trains. Like many other railfans who take photos, Perry had prints made up as postcards and used a ink stamp to identify their work as these photos were shared with others who also had a hobby of photographing trains. Perry died in 1970, leaving his collection of train photos and negatives to the Denver Public Library. 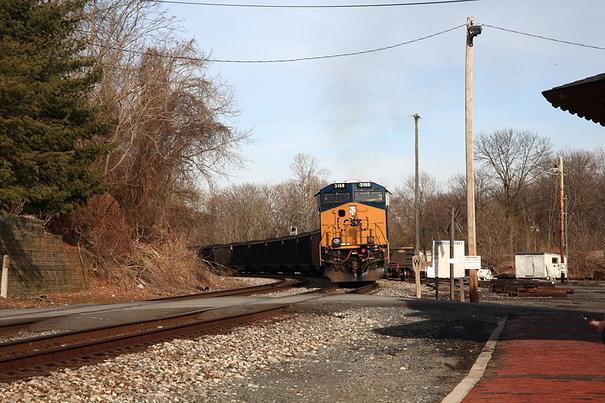 A CSX freight train running on the old main line at Point of Rocks, Maryland.