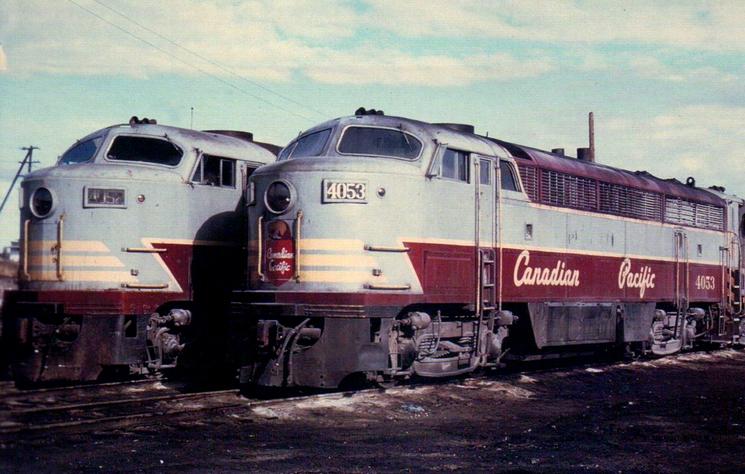 Go to Canadian Pacific: Part One

BC Coast Steamships
The Canadian Pacific Railway Coast Service (British Columbia Coast Steamships or BCCS) was established when the CPR acquired in 1901 Canadian Pacific Navigation Company (no relation) and its large fleet of ships that served 72 ports along the coast of British Columbia including on Vancouver Island. Service included the Vancouver-Victoria-Seattle Triangle Route, Gulf Islands, Powell River, as well as Vancouver-Alaska service. BCCS operated a fleet of 14 passenger ships made up of a number of Princess ships, pocket versions of the famous ocean going Empress ships along with a freighter, three tugs and five rail car barges. Popular with tourists, the Princess ships were famous in their own right especially the Princess Marguerite (II) which became the last coastal liner operating from 1949 until 1985. The best known of the princess ships, however, is the Princess Sophia, which sank with no survivors in October 1918 after striking the Vanderbilt Reef in Alaska's Lynn Canal, constituting the largest maritime disaster in the history of the Pacific Northwest. These services continued for many years until changing conditions in the late 1950s brought about their decline and eventual demise at the end of season in 1974. The Princess Marguerite was acquired by the province’s British Columbia Steamship (1975) Ltd. and continued to operate for a number of years. In 1977 although the BCCSS was the legal name, it was rebranded as Coastal Marine Operations (CMO). By 1998 the company was bought by the Washington Marine Group which after purchase the company was renamed Seaspan Coastal Intermodal Company. Even though passenger service ended in 1971, CP did have some ferries for freight. These ships currently are in service today.

All of these lake operations had one thing in common, the need for shallow draft therefore stern wheelers were the choice of ship. Tugs and barges handled rail equipment including one operation that saw the entire train including the locomotive and caboose go along. These services gradually declined and ended in 1975 except for a freight barge on Slocan Lake. This was the one where the entire train went along since the barge was a link to an isolated section of track. The Iris G tug boat and a barge were operated under contract to CP Rail until the last train ran late in December 1988. The stern wheel steamship Moyie on Kootenay Lake was the last CPR passenger boat in BC lake service, having operated from 1898 until 1957. It became a beached historical exhibit, as are also the Sicamous and Naramata at Penticton on Lake Okanagan.

Hotels
To promote tourism and passenger ridership the Canadian Pacific established a series of first class resort hotels. These hotels became landmarks famous in their own right. They include The Algonquin in St. Andrews, Château Frontenac in Quebec, Royal York in Toronto, Minaki Lodge in Minaki Ontario, Hotel Vancouver, Empress Hotel in Victoria and the Banff Springs Hotel and Chateau Lake Louise in the Canadian Rockies. Several signature hotels were acquired from its competitor Canadian National during the 1980s, including the Jasper Park Lodge. The hotels retain their Canadian Pacific heritage but are no longer operated by the railroad. In 1998 Canadian Pacific Hotels acquired Fairmont Hotels, an American company, becoming Fairmont Hotels and Resorts Inc. and the combined corporation operated the historic Canadian properties as well as the Fairmont's U.S. properties until sold in 2006.

Airline
Canadian Pacific Airlines, also called CP Air, operated from 1942 to 1987 and was the main competitor of Canadian government-owned Air Canada. Based at Vancouver International Airport, it served Canadian and international routes until it was purchased by Pacific Western Airlines which merged PWA and CP Air to create Canadian Airlines.

Locomotives
Steam locomotives
In the CPR's early years, it made extensive use of American Standard 4-4-0 steam locomotives and an example of this is the Countess of Dufferin. Later, considerable use was also made of the 4-6-0 type for passenger and 2-8-0 type for freight. Starting in the 20th century, the CPR bought and built hundreds of Ten-Wheeler type 4-6-0s for passenger and freight service and similar quantities of 2-8-0s and 2-10-2s for freight. 2-10-2s were also used in passenger service on mountain routes. The CPR bought hundreds of 4-6-2 Pacifics between 1906 and 1948 with later versions being true dual purpose passenger and fast freight locomotives.

The CPR built hundreds of its own locomotives at its shops in Montreal, first at the New Shops as the DeLorimer shops were commonly referred to and at the massive Angus Shops that replaced them in 1904. Some of the CPR's best-known locomotives were the 4-6-4 Hudsons. First built in 1929 they began a new era of modern locomotives with capabilities that changed how transcontinental passenger trains ran, eliminating frequent changes en route. What once took 24 changes of engines in 1886, all of them 4-4-0s except for two of 2-8-0s in the mountains, for 2,883 miles (4,640 km) between Montreal and Vancouver became 8 changes. The 2800s (Twenty Eight Hundreds) as the Hudson type was known, ran from Toronto to Fort William a distance of 811 miles (1,305 km), while another lengthy engine district was from Winnipeg to Calgary 832 miles (1,339 km). Especially notable were the semi-streamlined H1 class Royal Hudson, locomotives that were given their name because one of their class hauled the Royal Train carrying King George VI and Queen Elizabeth on the 1939 Royal Tour across Canada without change or failure. That locomotive, No. 2850, is preserved in the Exporail exhibit hall of the Canadian Railway Museum in St. Constant (Delson) Quebec. One of the class, No. 2860, was restored by the British Columbia government and used in excursion service on the British Columbia Railway between 1974 and 1999.

Diesel locomotives
In 1937, the CPR acquired its first diesel-electric locomotive, a custom built one-of-a-kind switcher numbered 7000. This locomotive was not successful and was not repeated. Production model diesels were imported from American Locomotive Company (Alco) starting with five model S-2 yard switchers in 1943 and followed by further orders. In 1949, operations on lines in Vermont were dieselized with Alco FA1 road locomotives (8 A and 4 B units), 5 Alco RS-2 road switchers, 3 Alco S-2 switchers and 3 EMD E8 passenger locomotives. In 1948 Montreal Locomotive Works began production of Alco designs.

In 1949, the CPR acquired 13 Baldwin designed locomotives from the Canadian Locomotive Company for its isolated Esquimalt and Nanaimo Railway, and Vancouver Island was quickly dieselized. Following that successful experiment, the CPR started to dieselize its main network. Dieselization was completed 11 years later, with its last steam locomotive running on 6 November 1960. The CPR's first-generation locomotives were mostly made by General Motors Diesel and Montreal Locomotive Works, (American Locomotive Company designs), with some made by the Canadian Locomotive Company to Baldwin and Fairbanks Morse designs. CP was the first railway in North America to pioneer AC traction diesel-electric locomotives, in 1984. In 1995 CP turned to General Electric GE Transportation Systems for the first production AC traction locomotives in Canada, and now has the highest percentage of AC locomotives in service of all North American Class I railways. As of early 2007, 578 of the CPR's 1,669 locomotives are AC.

Major facilities
CP owns a large number of large yards and repair shops across their system, which are used for many operations ranging from intermodal terminals to classification yards. Below are some examples of these.

Active hump yards
Hump yards work by using a small hill over which cars are pushed, before being released down a slope and switched automatically into cuts of cars, ready to be made into outbound trains. Many of these yards were closed in 2012 and 2013 under Hunter Harrison's company-wide restructuring, only the St. Paul Yard hump remains open.