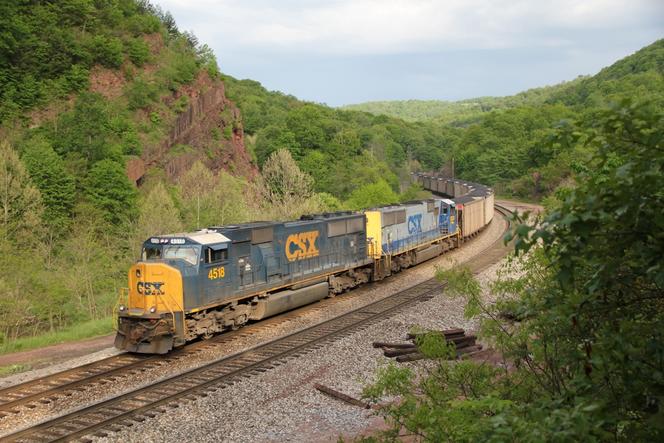 One line in the Northern Region travels into Canada:
Montreal Subdivision (Albany Division) from Massena, New York, to Beauharnois, Quebec

Unit trains
CSX operates the Juice Train — a collective name for Train Nos. O823, Q740 and Q741, Q743, and Q745 — which consists of Tropicana cars that carry fresh orange juice between Bradenton, Florida, and the Greenville section of Jersey City, New Jersey. The train also runs from Bradenton to Fort Pierce, Florida, via the Florida East Coast Railway. In the 21st century, the Juice Train has been studied as a model of efficient rail transportation that can compete with trucks and other modes in the perishable-goods trade.

Coke Express trains run between Pittsburgh and Chicago, and other places in the rust belt, carrying coke to industries, mainly steel mills.

CSX also runs daily trash trains Q702 and Q703 from The Bronx to Philadelphia (via Selkirk Yard) and then Petersburg, Virginia, where they interchange with NS. These trains consist of 89-foot flatcars loaded with four containers of trash. Another pair of trains, Q710 and Q711, originate in Kearny, New Jersey, and terminate in Russell, Kentucky.

Another style of unit train is a local trash train, D765, that runs between the Maryland towns of Derwood and Dickerson. The train runs daily except on Sundays; on holidays it sometimes runs twice a day. Trash is carried from Montgomery County's Shady Grove Transfer Station to a waste-to-energy plant located off the PEPCO lead to Mirant's Dickerson Generating Station. The trip is roughly 17 miles, and the train is made up of National Steel Car Company-built well cars, hauling 40-foot containers. The first NEMX equipment was built when the D765 first started operations in 1995. In recent years, the fleet has been somewhat upgraded, repainted, and new cars have been constructed. In the early days, the locomotives powering the train were a GP40-2/RDMT slug set, but currently the train can be upwards of 47 cars. The locomotives that now routinely power the train are a pair of EMD SD50s.

Working with Union Pacific, CSX runs an extended-haul perishables train, Q090. Known by the railroad as the "Apple Train" or "Salad Shooter", the train runs from Wallula, Washington, to Schenectady, New York. This train typically runs with three of Union Pacific's newest locomotives and has its extended haul inspection from Wallula to Schenectady at Cleveland-Collinwood Yard on CSX headed in both directions. On the return trip, the train is labeled Q091. CSX modified its Train Handling rule book to allow this train to use more power axles. In early 2012 the "Salad Shooter" derailed just a few miles northwest of Greenwich Ohio. No injuries were reported in the incident.

CSX currently uses a blue and yellow paint scheme for its locomotives. More than 1,000 CSX locomotives are painted in the YN3 scheme, which debuted in 2002 on No. 8503, an EMD SD50 that has since been downgraded to an SD50-2.

CSX recently created a new paint scheme, known as YN3b or more informally "Cost Cutter", which updates YN3 with the most recent CSX logo. The first unit to wear this scheme was ES44AH 950. Currently, CSX's ES44AHs 950-999 and 3000–3159 wear the scheme, along with several recently repainted older locomotives, the first of which was SD70MAC 4719, which was repainted at the Huntington Locomotive Shops in September 2012. CSX has also obtained a few EMD F40PHs that were retired from Amtrak for executive office car service.

All of the former-Conrail locomotives in active service have been repainted in a CSX paint scheme. Former Conrail locomotives can be spotted by recognizing phase differences in engine models and numbering. Other spotting details can be inconsistent, but can include a number of the following: red marker lights, Leslie model RS3L air horns, former Conrail SD40-2s ride on Flexicoil "C" trucks and have anticlimbers, ditch lights mounted beneath the anticlimber, headlights above the cab (vs. CSX's standard practice of nose mounted headlights on all wide-nose GE units), and modified "Bright Future" paint with battery box faces painted yellow (instead of black or blue).

Hump yards
In hump yards, trains are slowly pushed over a small man-made hill as cars are uncoupled at the crest of the hill and allowed to roll down the hump into the appropriate tracks for outbound trains.

CSX also operates numerous trains to and from Oak Island Yard, in Newark, New Jersey, which is operated by Conrail Shared Assets Operations (CRCX) on its and Norfolk Southern's behalf. CSX operates two pairs of daily trains to/from Oak Island, Q433 and Q434 coming from and going to Selkirk, along with Q300 and Q301 to and from South Philadelphia.

NASCAR sponsorship
In 2013, CSX's "Play It Safe" campaign promoting safety near railroad tracks signed on as a sponsor for the #34 driven by David Ragan of Front Row Motorsports in the NASCAR Sprint Cup Series. This sponsorship has continued with new driver Brett Moffitt. 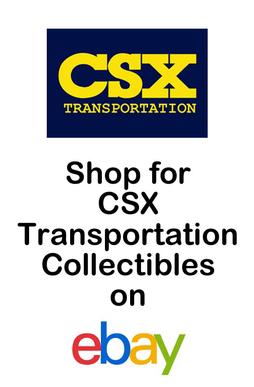 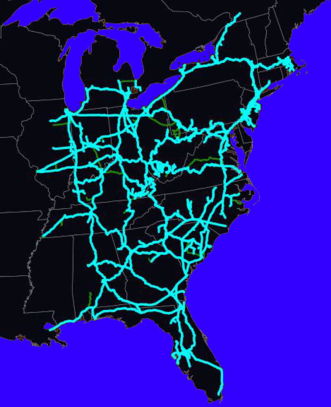 CSX Transportation
CSX Transportation (reporting mark CSXT) is a Class I railroad in the United States and the acronym means Chessie and Seaboard System. The main subsidiary of the CSX Corporation, the railroad is headquartered in Jacksonville, Florida, and owns about 21,000 route miles.  CSX operates one of the three Class I railroads serving most of the East Coast, the other two being the Norfolk Southern Railway (NS) and Canadian Pacific Railway. It also serves the Canadian provinces of Ontario and Quebec. Together CSX and Norfolk Southern Railway have a duopoly over all east-west freight rail traffic east of the Mississippi River. As of October 1, 2014 CSX's total public stock value was slightly over $32 billion.

History
CSX Transportation was formed on July 1, 1986, by combining the Chessie System and Seaboard System Railroad. The originator of the Seaboard System was the former Seaboard Air Line Railroad, which previously merged Atlantic Coast Line Railroad in 1967, and later Louisville & Nashville Railroad, as well as several smaller subsidiaries such as the Clinchfield Railroad, Atlanta & West Point Railroad, Monon Railroad and the Georgia Railroad. The origin of the Chessie System was the former Chesapeake & Ohio Railway, which had merged with the Baltimore & Ohio Railroad, and Western Maryland Railroad.

On June 23, 1997, CSX and Norfolk Southern Railway (NS) filed a joint application with the Surface Transportation Board for authority to purchase, divide, and operate the assets of the 11,000 miles Conrail, which had been created in 1976 by bringing together several ailing Northeastern railway systems into a government-owned corporation. On June 6, 1998, the STB approved the CSX–NS application and set August 22, 1998, as the effective date of its decision. CSX acquired 42 percent of Conrail's assets, and NS received the remaining 58 percent. As a result of the transaction, CSX's rail operations grew to include some 3,800 miles of the Conrail system (predominantly lines that had belonged to the former New York Central Railroad). CSX began operating its trains on its portion of the Conrail network on June 1, 1999. CSX now serves much of the eastern U.S., with a few routes into nearby Canadian cities.

The name came about during merger talks between Chessie System, Inc. and Seaboard System Railroad, Inc., commonly called Chessie and Seaboard. The company chairmen said it was important for the new name to include neither of those names because it was a partnership. Employees were asked for suggestions, most of which consisted of combinations of the initials. At the same time a temporary shorthand name was needed for discussions with the Interstate Commerce Commission. CSC was chosen but belonged to a trucking company in Virginia. CSM (for Chessie-Seaboard Merger) was also taken. The lawyers decided to use CSX, and the name stuck. In the public announcement, it was said that "CSX is singularly appropriate. C can stand for Chessie, S for Seaboard, and X, which actually has no meaning. But the X could be used as a short term for the word "Express" taking off the "E" giving out "Xpress", putting the X in use. The T had to be added to CSX when used as a reporting mark because reporting marks that end in X means that the car is owned by a leasing company or private car owner. Its current slogan, "How Tomorrow Moves", appeared in 2008.

In 2014 Canadian Pacific Railway approached CSX with an offer to merge the two companies, but CSX declined and in 2015 Canadian Pacific made an attempt to purchase and merge with Norfolk Southern.