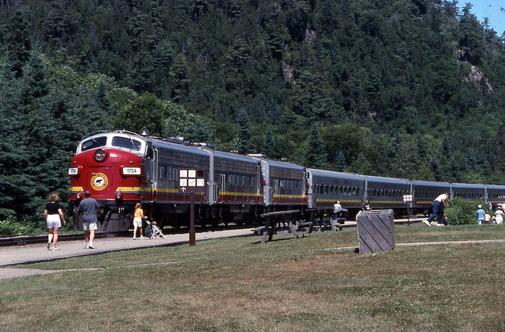 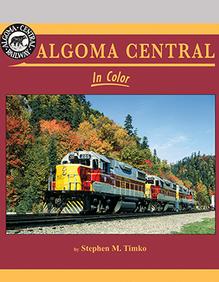 Algoma Central Railway
The Algoma Central Railway (reporting mark AC) is a railway in Northern Ontario that operates between Sault Ste. Marie and Hearst. It formerly also had a branch line to Michipicoten. The area served by the railway is sparsely populated, with few roads. The railway is well known for its Agawa Canyon tour train and also provides passenger train service along its entire route to canoeists, snowmobilers, cottagers and tourists accessing this wilderness recreation region. The railway connects at its northernmost point with the Ontario Northland Railway and with CN's eastern division to the south. It also intersects with the Canadian Pacific Railway at Franz, ON and with the Huron Central Railway at its southernmost point in the Sault. The railways headquarters are in Sault Ste. Marie, Ontario.

History
The Algoma Central Railway was initially owned by Francis H. Clergue, who required a railway to haul resources from the interior of the Algoma District to Clergue's industries in Sault Ste. Marie; specifically, to transport logs to his pulp mill and iron ore from the Helen Mine, near Wawa, to a proposed steel mill (which was later named Algoma Steel). The Algoma Central Railway was chartered on August 11, 1899. The railway's Dominion and provincial charters gave it authority to build north from Sault Ste. Marie to a junction with the Canadian Pacific Railway's main line, as well as a branch line to Michipicoten Harbour, on Lake Superior near Wawa.

The Algoma Central fell victim to the bankruptcy of Clergue's Consolidated Lake Superior Corporation in 1903. At that time, the line reached 90 km (56 mi) north of Sault Ste. Marie, with a 32 km (20 mi) segment running east from Michipicoten Harbour that did not yet connect with the main line. Construction was stopped, but it was subsequently resumed in 1909 and the line was extended northward through to junctions with the Michipicoten Harbour branch (at Hawk Junction), the Canadian Pacific Railway (at Franz) and the Canadian Northern Railway (at Oba). In 1914, it finally reached Hearst, a town 476 km (296 mi) north of Sault Ste. Marie that was a divisional point on the National Transcontinental Railway. By that point, Clergue's dream of building a railway to Hudson Bay or James Bay had long been abandoned, and the railway's northern terminus remained at Hearst, around 240 km (150 mi) from James Bay. However, the phrase and Hudson Bay was not removed from the railway's name until June 30, 1965.

The Algoma Central was the first Canadian railway to fully dieselize, in 1952.

In the 1960s, the railway began to promote the natural beauty of the District of Algoma to tourists, especially the Agawa Canyon, a canyon carved by the Agawa River, located 114 rail miles (183 km) north of Sault Ste. Marie, and not accessible by road. The Algoma Central developed a tourist stopover here and it proved to be a great success for the railway. Owing to the popularity of the Agawa Canyon excursions, the Algoma Central would run the longest passenger trains in North America, often up to 20 to 24 cars long. During the 1970s and 1980s, around 100,000 people per year would tour Agawa Canyon.

In January 2014, CN announced it was cutting the service from Sault Ste. Marie to Hearst blaming the Canadian federal government for cutting a subsidy necessary to keep the service running. The passenger service which runs three days per week provides year-round access to remote tourist camps and resorts. The average annual ridership is estimated to be 10,600 passengers. It has been argued in the past as an essential service however the service has always been deemed financially uneconomic. The railway is the subject of the song Algoma Central 69 by Stompin' Tom Connors.

In February, a working group attempting to save the line hired BDO Canada LLP, an accounting firm, to assess the financial impact to the region when the service is scheduled to end April 29. The working group, composed of municipalities, first nations, and cottager associations all with a vested interest in the continuation of the service. According to preliminary findings, BDO determined passenger rail service in the Algoma district generates between $38 million and $48 million in annual economic activity. It supports as many as 220 jobs and delivers more than $5 million in tax revenues.

In April, 2014 the federal government announced it would extend funding for one year so that CN rail would continue to provide the passenger service. The $2.2 million subsidy will facilitate the provision of service until 2015. In March 2015 it was announced that the passenger service would be assumed by Railmark Canada Ltd with the intention to increase services and marketing.

In March 2015, the Canadian government guaranteed funding of the service for an additional three years.

In June of the same year, Canadian National indicated they would stop the service July 15 after they were unable to find a deal with Railmark Canada. The government subsidy still stands but a new rail operator will need to be sought by the regional stakeholders group. Railmark was unable to secure a line of credit from a lending group which hindered its ability to take over services.