Its north-south mainline is located entirely in Ontario, and has a southern terminus at North Bay, passing through Cochrane, and a northern terminus at Moosonee, several miles south of the shore of James Bay. An east-west secondary mainline connects Calstock (near Hearst) with Cochrane, and a line extends from Swastika (south of Cochrane) into the neighboring province of Quebec, where it terminates at Rouyn-Noranda. The railway's branch from Swastika to Rouyn-Noranda, including 40 kilometers of track in Quebec, is operated by a subsidiary, the Nipissing Central Railway. Shorter spur lines also exist running west from Rock Junction to Sherman Mine, south-west from Porquis Junction to Kidd Creek Mine, about 22 km east of Timmins, north-east from Porquis to Iroquois Falls and south from Opaz Junction to Agrium mine site.

Originally built to develop the Lake Timiskaming and Lake Nipissing areas, the railway soon became a major factor in the economic growth of the province. After decades of difficult construction through the Canadian Shield, workers reached James Bay in 1932. While blasting the route through the shield, geologists discovered deposits of valuable minerals such as gold, silver, copper and nickel. The railway also made it possible to exploit the timber resources of Northern Ontario.

History
1902–46
The railway was originally incorporated as the Temiskaming and Northern Ontario Railway on March 17, 1902, by the Temiskaming and Northern Ontario Railway Act of the Ontario parliament. The railway was to be a provincial Crown corporation overseen by the Temiskaming and Northern Ontario Railway Commission. Construction on the railway started in 1903, and the settlement of Redwater in the municipality of Temagami began as a small request stop when the railway reached the area of the Lower and Upper Redwater Lakes. As it passed by Long Lake, near the 103 mile marker, the largest silver rush in Canada was sparked by workers looking for trees for railway ties. The town of Cobalt grew out of the fortunes of silver taken from the grounds. By 1905, it reached New Liskeard in the Lake Timiskaming area. The railway reached Englehart in 1906 and Cochrane in 1909. In the next few years, several branch lines were built.

In 1921, construction on a line north to James Bay was started. In 1923, the new Conservative premier of Ontario, Howard Ferguson, halted further construction, saying that it would be unprofitable. For four years the terminus of the line remained at Fraserdale, near Abitibi Canyon, where the Abitibi Canyon Generating Station was being built on the Abitibi River. Between 1928 and 1930 the railway was extended north at a slow pace. The pace of construction was quickened in 1930 as a make-work project due to the depression. The extension to James Bay was opened on July 15, 1932. The terminus of the railway was at the mouth of the Moose River near the old trading post of Revillon Frères. It was named Moosonee, from the Cree meaning "at the moose".

A name change for the railway was first proposed in 1942 by Arthur Cavanagh, who was chairman of the commission between 1940 and 1944. He noted that it would have the advantage of associating the railway with the province, not just the District of Timiskaming. A name change would also avoid confusion with the Texas and New Orleans Railway, which had the same initials. The Ontario railway often had boxcars misdirected in the United States, while receiving invoices that should have gone to Texas. The railway's name was changed to the Ontario Northland Railway on April 5, 1946, when a bill amending the Temiskaming and Northern Ontario Railway Act received assent.

1946–2010
Three new mines were opened in Northern Ontario in the 1960s. Sherman Mine in Temagami was opened in 1968, Adams Mine in Kirkland Lake in 1963, and Kidd Creek Mine in Timmins in 1967. The Ontario Northland Railway built spurs to serve these mines.

In December 2000, the Ontario government announced that it would be privatizing the railway. CN submitted a bid in March 2002, and in October the government gave it exclusive rights to negotiate a purchase of the railway. However, the deal fell through on July 2, 2003, over the government's insistence on job guarantees, and the railway remains in public hands. On February 25, 2005, CN and ONR signed a routing agreement in which ONR would transport CN's freight traffic between Noranda and either Hearst or North Bay.

On April 14, 2010, there was news of an Ontario Northland takeover of the controversial Ottawa Valley rail tracks. However, this development is highly unlikely due to a lack of funds. This purchase may be improbable.

2012: Divestment
On March 23, 2012, the Ontario government announced that it would begin to wind down the ONTC, citing increased costs to the government and stagnant ridership. ONR passenger train service between Toronto and Cochrane (the Northlander) was withdrawn and replaced with an augmented bus service, and all of the corporation's assets were to be sold off. On August 16, the Ontario Government announced that Northlander train service will end on September 28, 2012, and Ontera will be sold off.

2014: Restructuring
Northern Ontario municipal leaders had continued to express their fears regarding the divestment. They indicated that the ONR provides a fundamental link to many remote and rural communities and provides freight transport to many companies, including mining and forestry, allowing them to thrive. They indicate that the government maintained its funding to the GO Transit network in Southern Ontario and it is important not forget about the important service the ONR provides to Northern Ontario residents. February 2014, the new premier of Ontario, Kathleen Wynne, met with northern community leaders and the head of the company and union to discuss the future of the company. They decided the union and management would present a reconstruction plan to the government for consideration.

In late February, 2014 a report to restructure the ONTC was delivered to the Minister of Northern Development and Mines. The proposal detailed how the organization could be modernized both culturally and in job reductions through attrition. The report was well received by the minister who appreciated how management and labor come together to explore options for the corporation.

In April 2014 the provincial government concluded the company would remain in public hands. However, Ontera (its telecommunication division) would be sold off to Bell Aliant. The government would reinvest in the company to purchase new coaches and refurbish rolling stock for the Polar Bear Express. This decision was supported by other members of Provincial Parliament after the auditor general's review cited that it would have cost the taxpayer $820 million instead of saving $265.9 million over three years had the divestment proceeded.

Passenger trains
Ontario Northland Passenger Service
ONR operated the following passenger services:
The Northlander from Cochrane to Toronto, 6 days per week, year-round. The ONTC announced plans to discontinue the Northlander and replace it with bus service. The final train ran on September 28, 2012.
The Polar Bear Express from Cochrane to Moosonee, 5 days per week, year-round, and 6 days per week in the summer. This is a flag stop train. The Ontario government has stated its intention to preserve this service even as the ONTC winds down, saying that it will "develop ... a new model to provide ongoing support for essential transportation services, such as the Polar Bear Express."
The Dream Catcher Express from North Bay to Temagami, an early fall excursion service. No specific announcement has been made on the future of this service.

In June 2007 the Polar Bear Express was expanded from a seasonal excursion service to a year-round passenger train, replacing the Little Bear mixed freight/passenger train, which had operated 3 days per week. The new train carries some equipment not commonly found on passenger trains, including chain cars (flat cars) for passenger vehicles and boxcars.

The railway currently owns about 25 diesel locomotives and roughly 700 items of rolling stock. One of its more unusual pieces of rolling stock is a canoe car, which is in service in the summer as part of the Polar Bear Express passenger train. The car can hold up to 18 canoes. Canoeists can put canoes on this car as part of their baggage, although canoes are often stowed in boxcars. It is the only known train car specifically designed for transporting canoes and kayaks.

In 1977, the railway purchased four RAm/DE train sets retired from the Trans Europ Express by the Dutch and Swiss railways, for use on its Northlander train. However, the experiment was not entirely successful. The locomotives were scrapped in 1984, although the passenger cars survived until the early 1990s. These surviving passenger cars were pulled by rebuilt Canadian locomotives. The rear end of the locomotives was altered to fit to original cars. With the Canadian locomotives, the control car / DVT lost their function.

Many passenger cars used on ONR trains today are former single-level GO Transit cars that were extensively refurbished after being used for commuter service around Toronto.

In 2004, Ontario Northland purchased ten passenger cars, including dome cars, from BC Rail and has used some of them on the Polar Bear Express service between Cochrane and Moosonee.

Facilities
North Bay Yard - located on the west side of the ONR Head Office and stores most of the ONR's cars. Ontario Northland's Refurbishment Division at the yard was contracted by GO Transit to overhaul some bi-level cars.
Cochrane Yard - a small yard located next to Cochrane station (not the larger one to the east).
Temagami Work Shed - located north of the Temagami Station (1907) to handle freight.
Moosonee Yard - small yard to store box/rail cars and diesel locomotives. 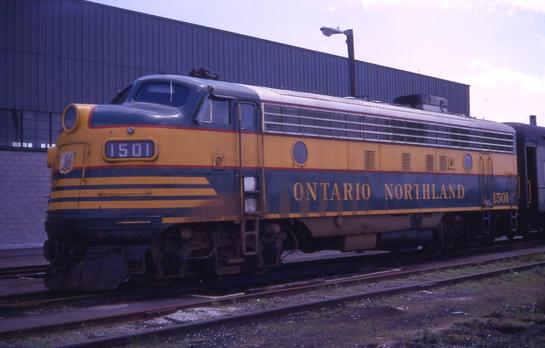 By Central Data Bank at English Wikipedia, CC BY 3.0, https://commons.wikimedia.org/w/index.php?curid=7530115

Traveling on the Ontario Northland Railway from Toronto to Moosonee via Cochrane in October 1997. Part of a trip organized by Ffestiniog Travel.