List of Via Rail rolling stock
This is a list of past and present rolling stock owned and operated by Via Rail in Canada. Via Rail owns 78 locomotives and 396 passenger cars. The lists below show that equipment by type and include some information regarding previously-owned and operated equipment. When Via began operation in 1976–1978 it was with a collection of equipment inherited from the Canadian National Railway (CN) and Canadian Pacific Railway (CP). Much of this equipment remains in use today. Over the years Via has supplemented this initial fleet with new orders and with new acquisitions of secondhand equipment from other operators.

Passenger cars
Stainless steel
The core of Via's long-range fleet is a collection of streamlined equipment originally built by the Budd Company for the Canadian Pacific Railway in the 1950s. These were rebuilt by AMF to use head end power and thus are often referred to as the "HEP" fleet.

LRCA
LRC was a series of lightweight diesel-powered passenger trains built by Bombardier that were used on short- to medium-distance inter-city service in the provinces of Ontario and Quebec. The LRC family includes both locomotives and passenger carriages designed to work together, though the two can be, and now are, used separately. The last locomotives were retired in 2001 but the coaches remain in service.

Renaissance
The Renaissance fleet was originally built by Alstom in the mid-1990s for the proposed "Nightstar" overnight service between the United Kingdom and continental Europe via the Channel Tunnel. Via acquired the entire fleet in 2000 for C$130 million after the Nightstar concept was abandoned. The cars entered service in 2002.

The Budd Rail Diesel Car (RDC) is a self-propelled diesel multiple unit railcar. These were used extensively by both the Canadian National and Canadian Pacific Railways for outlying routes. Via currently rosters seven RDCs and with Industrial Rail Services for C$12.6 million to refurbish and upgrade all six. The upgraded units would include new seating, wheelchair accessible washrooms, LED interior lighting, controls, wiring, heating, air conditioning systems, braking systems and rebuilt engines that meet Euro 2 standards. The rebuilt units have also been modified to remove the control cab from one end of each unit, so passengers are never required to pass through the cab when entering or exiting the train. Following the bankruptcy of IRSI, work rebuilding the RDCs was completed by Canadian Allied Diesel (CAD) at the IRSI facility in Moncton.

Type: Budd observation/club car
Built: 1939
Years of service: 2002–present
In service: 1
Fleet numbers: 1751
Notes: Acquired from BC Rail as 1750 Pavillion. Original built in 1939 as Biscayne Bay, later as Memphis and owned by 8 different owners. Has never entered service with VIA and stored at Montreal Maintenance Centre.

Locomotives
Current
Via operates diesel locomotives exclusively. Its fleet of GMD F40PH-2s was recently modernized. The newer GE P42DCs are found only on Corridor services. The F40PH-2 is the mainstay of Via's road fleet.

Model: GMD F40PH-2
Road numbers: 6400–6459
In service: 53
Years of service: 1987–present
Notes: 6403 was renumbered to 6459 in 2013 and is featured on the Canadian $10 bills issued starting in 2013. The actual 6403 was renumbered to 6459 due to its appearance on the bill. All units in the fleet were rebuilt by Canadian Allied Diesel, which included many modernization upgrades, and the addition of a separate Head-end Power generator at the rear of the locomotive. The rebuild was complete by 2012.

Former
Via inherited a diverse fleet of diesel locomotives from the Canadian National and Canadian Pacific Railways. It also received three of the experimental UAC TurboTrain gas-turbine trainsets. Between 1980–1984 Bombardier delivered 31 LRC ("Light, Rapid, Comfortable") diesel locomotives with matching cars. The last of these was retired in 2002.

Model: GMD FP9
Notes: Ex-CN and CP. Later rebuilt as the VIA FP9ARM. 6304 acquired by Trains Unlimited Rail Tours of California; 6510 on static display in Thunder Bay ON. F9B 6633 wrecked in 1986 and retired/scrapped. 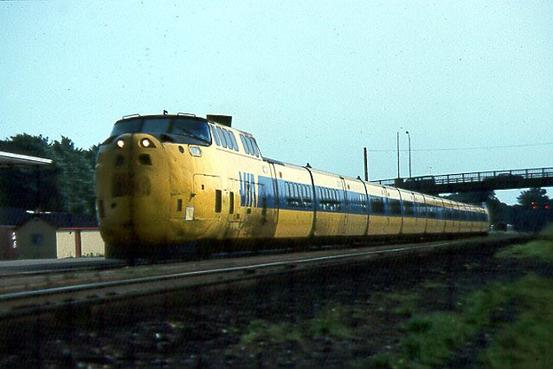 A Via Rail Slideshow.