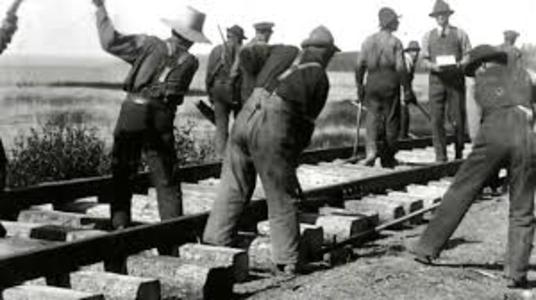 The Building of a Transcontinental Railway in Canada

The Grand Trunk Pacific Railway was a historical Canadian transcontinental railway running from Winnipeg to the Pacific coast at Prince Rupert, British Columbia. East of Winnipeg the line continued as the National Transcontinental Railway, running across northern Ontario and Quebec, crossing the St. Lawrence River at Quebec City and ending at Moncton, New Brunswick. The entire line was managed and operated by Grand Trunk Railway. Construction of this transcontinental railway began in 1905 and was completed by 1913.

Scenes show earthworks and removal of spoil via railcars, steam locomotives hauling flatcars, ties being unloaded from trains and position on the new roadbed, unloading of rails, fastening of rails to railroad ties, and the works train traveling over the newly completed trackwork.