The Atchison, Topeka and Santa Fe Railway Company presents “Along the Santa Fe Trail,” a 1950s-era color film promoting travel by train. The film opens with a colorful array of travel brochures and schedules spread across a table at mark 00:28 before offering a montage of potential destinations across the United States — from snowcapped to beaches, from bustling urban areas to wide open spaces, from factories to farmland — there are “twin bands of steel” that carry the “lifeblood of America” across the country as a train is shown speeding down the track at mark 01:35. No matter where the viewer wishes to visit on vacation, the narrator explains (near mark 02:00) that there is probably a Santa Fe ticket office nearby to help get them there, as the scene carries the viewer inside one typical office and “Mr. Ticketman” offers a “charming lady” some destination choices. To get there, a passenger has a choice of trains from the company’s diesel-powered fleet, including the Golden Gate train which serves the West Coast or El Capitan which offers service between Chicago and Los Angeles. The San Diegan takes travels from Los Angeles to San Diego several times daily, while the Grand Canyon Limited and Texas Chief, the Chief, and the Super Chief offers various cross-country options. Mark 03:20 takes the viewer onboard one of Santa Fe’s lounge and dining cars as the narrator explains the various amenities provided to the weary traveler. “There is a train and an accommodation for your every comfort,” he reminds the viewer at mark 05:43.

The film continues by taking its viewer to some scenic locales, focusing on Native Americans of the desert Southwest and northern New Mexico, in addition to parks and national monuments such as the Painted Desert or Petrified Forest National Park in northern Arizona (introduced at mark 09:00). Those locations are followed by scenes at Carlsbad Caverns and then to the hustle of Denver (at mark 10:37) — “the metropolis of the Rocky Mountain empire” — as well as Colorado Springs. From there we visit Phoenix, the Rainbow Bridge National Monument in Page, Arizona (mark 14:22), and Aztec ruins before visiting the awe-inspiring sites of Monument Valley at mark 15:00 and Grand Canyon at mark 15:28. Yosemite National Park is visited at mark 19:10, as the film continues to show the viewer a variety of natural wonders, including the warm beaches and other tourist spots of Southern California (shown starting at mark 19:30). Pasadena’s Tournament of Roses Parade takes center stage in the film beginning at mark 21:32, followed by a visit to Hollywood (mark 22:11), as we see Hollywood Boulevard and the Hollywood Bowl, and visit the stars’ homes in nearby Palm Springs while saying hello to child star Jackie “Butch” Jenkins at mark 22:51.The film ends with a look at the Intertribal Indian Festival in Gallup, New Mexico, starting at mark 23:50.

Drumhead on an observation car on the Santa Fe Super Chief. 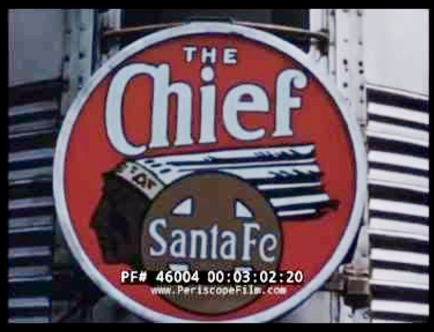