Camp Claiborne was a U.S. Army military camp during World War II located in Rapides Parish in central Louisiana. To simulate wartime repairs of railroads the Claiborne-Polk Military Railroad was built. The railroad was about 50 miles long and had 25 bridges. It crossed the Calcasieu River.

It ran from Camp Claiborne, on the Missouri Pacific south of Alexandria, westward 48 miles to Camp Polk, on the Kansas City Southern south of Leesville. Construction began on 4 September 1941 and the Golden Spike ceremony was held on 11 July 1942. In October 1942, the soldiers who had built the Claiborne-Polk Military Railroad shipped out to Iran, where they helped operate the Trans-Iranian Railroad. The foundation of the locomotive shop and other remnants can still be seen. 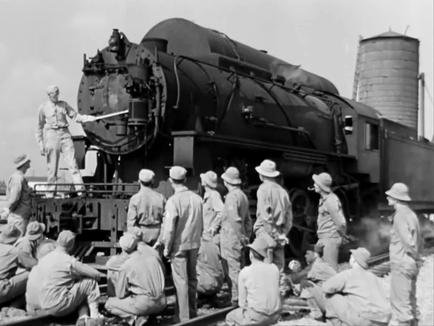 Soldiers in training on the U.S. Army Railroad.