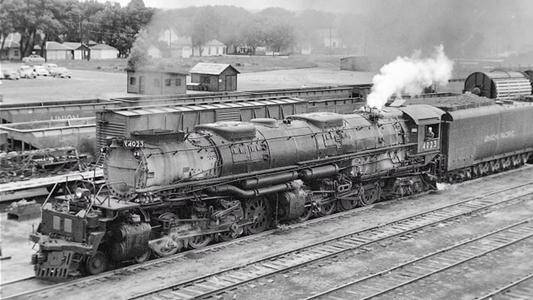 Big Boy and His Brothers

The Big Steam Locomotives of the Union Pacific

This silent documentary film "Big Boy and his Brothers" shows the big steam locomotives of the Union Pacific Railroad. Shot by Gene Miller primarily in western Nebraska, Wyoming and Colorado, this film gives a rare look at some of the largest locomotives ever built.

"Big Boy" is the popular name of the American Locomotive Company 4000-class 4-8-8-4 articulated, coal-fired, steam locomotives manufactured between 1941 and 1944 and operated by the Union Pacific Railroad until 1959. The Big Boy fleet of twenty five locomotives were used primarily in the Wyoming Division to haul freight over the Wasatch mountains between Green River, Wyoming and Ogden, Utah. They were the only locomotives to use a 4-8-8-4 wheel arrangement consisting of a four-wheel leading truck for stability entering curves, two sets of eight driving wheels and a four-wheel trailing truck to support the large firebox.

According to a Union Pacific executive, the 4-8-8-4 series originally was to have been called "Wasatch". One day while one of the engines was being built an unknown worker scrawled "Big Boy" in chalk on its front. With that, the legendary name was born and has stuck ever since.

Postwar increases in the price of both coal and labor and the efficiency of diesel-electric motive power foretold a limited life for the Big Boys, but they were among the last steam locomotives taken out of service. Towards the end of their career, the Big Boys could still pull more than their rated tonnage of 6,573 tons (5,963 t). The Big Boys' ratings were increased several times until they regularly pulled 8,727 tons (7,917 t) over the Wasatch range.

The last revenue train hauled by a Big Boy ended its run early in the morning on July 21, 1959. Most were stored operational until 1961 and four remained in operational condition at Green River, Wyoming until 1962. Their duties were assumed by diesel locomotives and gas turbine-electric locomotives.

Of the 25 Big Boy locomotives manufactured, eight remain. Seven of the eight surviving Big Boys are on static display. One, number 4014, is undergoing a restoration to operating condition for excursion service which includes conversion to No. 5 oil firing.

Last of the Giants