“Call Us Penn Central” is a circa 1968 color promotional film about the Penn Central Transportation Company, a railroad company created by the 1968 merger of the Pennsylvania and New York Central railroads that operated from 1968 until 1976. The film was likely prepared for the benefit of investors and possibly Wall Street, in an era of uncertainty. In 1970, the company filed for what was, at that time, the largest bankruptcy in US history. The first few minutes are filled with scenes of railroad yards and locomotives before the narrator presents a litany of locations and job occupations ranging from resort complexes, basketball games, and amusement parks to research scientists and locomotive engineers before finally revealing at mark 03:38 that such scenes “and many many more are parts of the Penn Central, America’s largest transportation company.” Accompanied by graphics, the narrator goes on to say how the company has more than 20,000 miles of tracks serving 100 million people in 14 states, two Canadian provinces, and the District of Columbia. We see scenes of the company’s rail operations starting at mark 04:00 while being reminded that the company’s passenger service lines had lost revenue due to changing patterns in pubic travels. As a result the company would be refocusing efforts on shorter “Metroliner” commuter routes between Washington, D.C. and New York City, we are told, as scenes of workers reworking tracks are shown. “Freight traffic, of course, is the backbone of the Penn Central,” the narrator says at mark 06:45. As scenes of rail yard traffics is shown, the narrator explains how the company is also working toward improving that aspect of the business, particularly in reaching out to new coal markets in Ohio and Pennsylvania, as well as the grain and automobile industries. A newly acquired diesel locomotive (one of 250 added to the fleet) is paraded before the camera at mark 09:30, considered another step in improving service, as is the addition of more than 3,000 freight cars. The film continues with a look at a new electronic classification yard in Albany, New York starting at mark 10:20, and automated car identification system in Denholm, Pennsylvania. There are scenes of research scientists working on new equipment and techniques (mark 12:25) and news of how the construction of Penn Center in Philadelphia over an existing station led to a successful urban redevelopment. The same is said of property in Pittsburgh, at Madison Square Garden, at Penn Plaza at a rebuilt Pennsylvania Station in NYC (mark 13:56), and around Grand Central Station. We visit Union Station in Washington, D.C. at mark 14:29, to learn of a planned redevelopment, as well as Chicago’s Union Station (14:52) for a quick look at new office buildings constructed over existing tracks. Penn Central also has diversified to hold partial ownership in everything from amusement parks to resorts, we are told. “We know that much remains to be done to reshape our rail system to meet its challenges, but we are on the move,” the viewer is assured at the 17:40 mark.

The Penn Central Transportation Company, commonly abbreviated to Penn Central, was an American Class I railroad headquartered in Philadelphia, Pennsylvania, that operated from 1968 until 1976. It was created by the 1968 merger of the Pennsylvania and New York Central railroads. The New York, New Haven & Hartford Railroad was added to the merger in 1969; by 1970, the company had filed for what was, at that time, the largest bankruptcy in U.S. history. 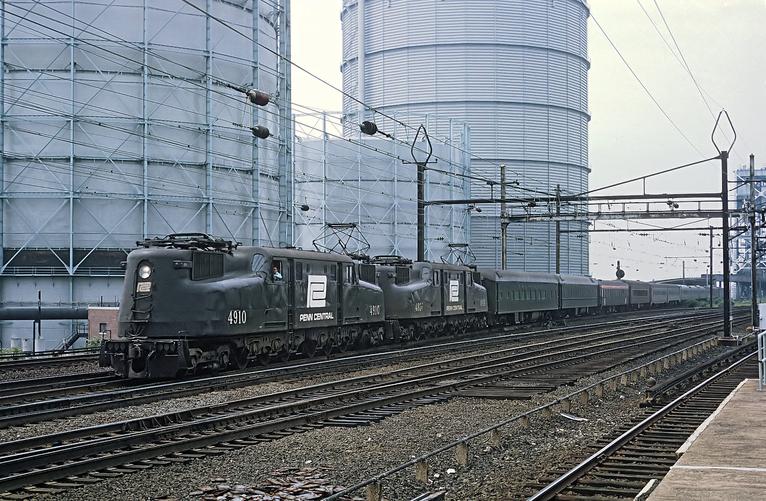