Created in the mid-1950s, this classic Santa Fe Railroad film celebrates the company's past and present as preparations are made to "meet the challenges posed by the future." The Centennial Celebration of 1950 is shown. The steam era is represented by Locomotive No. 1, aka Cyrus K. Holiday, a 2-8-0, and 2-10-4 Texas type No. 5034. When the 5034 locomotive heads into the roundhouse (symbolically ending the steam era) heavy diesel locomotives take their place. "On the Santa Fe nothing is permanent but progress," says the narrator, noting that new rails are installed at a length of 1,400' and 135 pounds. Diesel units shown in the film include Warbonnet F-units, E-units, and Alco PAs, and a section of the film is devoted to the San Francisco Bay ferry system. Primarily this is a safety film and there are many examples throughout the film of preventable accidents including a Fairmont motor car struck by a train, and injuries caused by sloppy work. 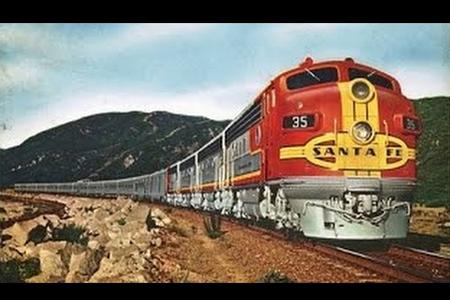