This is a wonderful, vintage 1949 promotional film, titled, "Fast Freight", that was produced for the Minneapolis and St Louis Railway. It's about an M&StL shipper customer who is provided an opportunity to ride aboard one of the railway's "Fast Freights" from Minneapolis, Minnesota to Peoria, Illinois and consequently he's able to see the Minneapolis & St. Louis up close in action enroute.

On this trip an Electro Motive (EMD) F3 A-B-A set of covered wagon diesel locomotives pulls the train southbound towards Peoria. Along the way are seen much of what was then the latest M&StL motive power such as EMD and ALCO road and switch engines and even an older Electro Motive gas electric passenger unit pulling a new stainless steel passenger coach. A few M&StL steam locomotives are visible too. In particular, a 2-8-2 Mikado type engine being shopped at Minneapolis (Cedar Lake yard).

Also seen are the various railroad yards and industries as the train passes through towns such as New Prague and Albert Lea, MN, as well as Mason City, Marshalltown (a short glimpse of the shops there), and Oskaloosa, IA. Finally are seen the railway's bridge spanning the Mississippi River between Iowa and Illinois, coal strip mines in action in west central Illinois and then finally the arrival at the yard in Peoria.

Hope you enjoy this trip back in time along "The Peoria Gateway"! (that was the slogan the M&StL used to promote to customers that the railroad avoided eastbound railroad traffic through the bottleneck of Chicago). 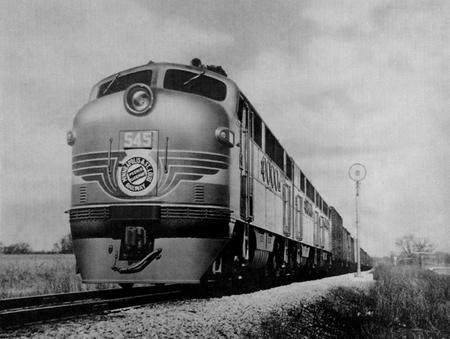