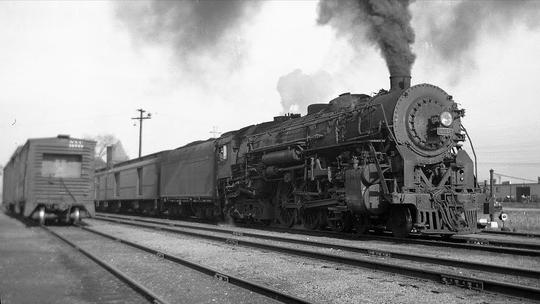 "Flight of the Century"

The NYC inaugurated this train as direct competition to the Pennsylvania Railroad, aimed at upper class as well as business travelers between the two cities. It made few station stops along the way and used track pans enroute to take water at speed; after 1938 it made the 960-mile journey in 16 hours, departing New York City westbound at 6:00 P.M. Eastern Time and arriving at Chicago's LaSalle St. Station the following morning at 9:00 A.M. Central Time., averaging 60 miles per hour. For a brief period after World War II, the eastward schedule was shortened to 15½ hours.

The 20th Century was known for its style, which has been described as "spectacularly understated ... suggesting exclusivity and sophistication" as well as for its speed; passengers walked to and from the train on a plush, crimson carpet which was rolled out in New York and Chicago and was specially designed for the 20th Century Limited. "Getting the red carpet treatment" passed into the language from this memorable practice. "Transportation historians", said the writers of The Art of the Streamliner, "consistently rate the 1938 edition of the Century to be the world's ultimate passenger conveyance—at least on the ground".

Shortly after the announcement of the fluorescent lamp, the cars of the 20th Century Limited were lit with this new type of lamp.

Like many express passenger trains through the mid-1960s, the 20th Century Limited carried an East Division (E.D.) Railway Post Office (R.P.O.) car operated by the Railway Mail Service (RMS) of the United States Post Office Department which was staffed by USPOD clerks as a "fast mail" on each of its daily runs. The mails received by, postmarked, processed, sorted, and dispatched from the 20th Century Limited 's RPOs were either canceled or backstamped (as appropriate) during the trip by hand applied circular date stamps (CDS) reading "N.Y. & CHI. R.P.O. E.D. 20TH CEN.LTD." and the train's number: "25" (NY-CHI) or "26" (CHI-NY).