GETTING OFF ON THE RIGHT FOOT by the Union Pacific Railroad, is by far and away THE BEST railroad safety film I have ever watched . . . in my opinion. This is the film that was shown when I hired out braking for the Santa Fe in January 1976 -- the film was just a few years old then. I don't know if the Archie Bunker looking switchman (ALL IN THE FAMILY was a popular TV show about the same time) was an actual old head switchman, or a professional Hollywood stunt man, but if he was the latter, he picked up the ways and mannerisms of a real switchman fast!!!

I had great appreciation for the handling of deadly serious matters in a humorous way. This film was so effective that I swear I remembered every frame 30 years later and not only did ALL the info it conveyed stick with me, but when it came my turn to train new railroaders, this film made me realize the importance and effectiveness of using HUMOR to get the point across in training. New employees are overwhelmed with the amount of things they have to learn, so much from books and even more importantly, the tons of things they have to learn and know that doesn't appear in writing. Humor always seems to "make it stick" -- their attention is held when they are instructed, and the vivid pictures and stories stay with them for a lifetime. If you don't believe that humor is effective, just think about some of the most dimwitted people you have met in your life. They could be dumber than a stump, but they seem to recall every joke they have ever heard and can recite them all day long. Anything else they don't understand or can't seem to remember for five minutes. That is why I think this film was so effective. I sure wanted to use it when I trained others, particularly on shortlines, but I never could find it.

A few years ago I searched the Internet, thinking surely someone had posted it on YouTube or elsewhere. No such luck. Finally a friend of mine came across a VHS tape of it and had me make several copies. I decided that this film was so important, that as a public service more than anything else, that I should digitize it and make it available to working railroaders, wannabe railroaders and others who would benefit by seeing this old film, even if many of the accepted practices shown here are no longer acceptable. The hazards remain the same regardless.

I have a real disdain for referring to approved work practices as "safety rules" or even "safe work practices" when I teach them. What it is, is "RISK MANAGEMENT" -- the risk the Carriers are willing to accept to get the job done. Risk is inherent in everything we do as railroaders, so it is a matter of assessing it, then finding what seems to be an acceptable level, where even if things go wrong, the damage is at least minimized. What was considered as the "safe" way back then when this film was made is now considered UNSAFE -- so unsafe that some of the things have become "cardinal sins" and will result in immediate dismissal from service if you are caught doing them. Even though some of the things shown in this old film as the safe work practice, by 1975 when I hired out, they had become taboo. Others lived on for many more years, with seemingly the early 90s bringing about the biggest changes. Even now, some railroads will still allow getting off and on moving equipment, where others have forbidden it except in case of emergencies. Other things that WERE taboo long ago, like setting and releasing handbrakes from the ground, are now permissible -- apparently the risk assessment was made and it was decided that getting up and on the car (especially in inclement weather) to set or release the handbrake and then getting back down, with all the hand hold and footwork changes, may actually introduce MORE chance of a slip and fall, etc., than doing the same job from the ground. There are ALWAYS tradeoffs and there are dozens more examples of rules being changed to allow a former "unsafe" practice to be done as a SAFE practice. There are other rules and practices that still remain to be changed for the better. Some rules get changed and then changed back several times -- I can't tell you how many times the procedure for riding TANK CARS has been changed on just the BNSF just in the last 10 years or so!!! It gets confusing at times, and a bit frustrating as one may do something that was acceptable yesterday that will get them fired today or vice-versa.

Anyway, enjoy the old film, have a few laughs and most importantly, WORK SAFE and BE SAFE!!! - R.J. McKay, YouTube. 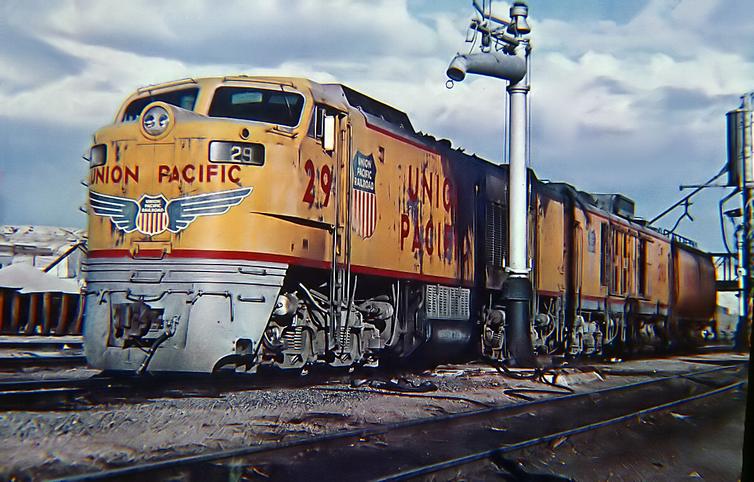