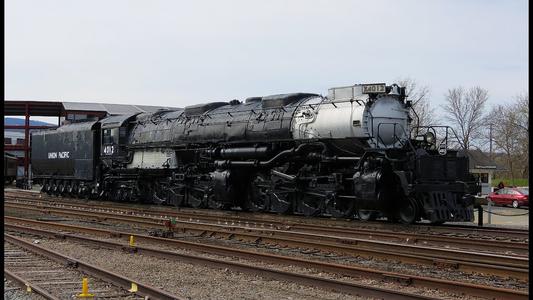 "Last of the Giants"

A tribute to the "Big Boy" locomotives produced by Union Pacific, "Last of the Giants" shows the end of a memorable era in Western Railroading. The "Big Boy" is the popular name of the American Locomotive Company 4000-class 4-8-8-4 articulated, coal-fired, steam locomotives manufactured between 1941 and 1944 and operated by the Union Pacific Railroad until 1959. In "Last of the Giants" you'll see the development of steam power on the Union Pacific from 4-6-0s, 2-8-0s, and 2-8-2s up to 2-10-2s and even 4-12-2s, shown through film, photos and animated diagrams. This is followed by the development of compound articulated Mallets and simple articulated locomotives such as the Challengers. The Big Boy fleet of twenty five locomotives were used primarily in the Wyoming Division to haul freight over the Wasatch mountains between Green River, Wyoming and Ogden, Utah. They were the only locomotives to use a 4-8-8-4 wheel arrangement consisting of a four-wheel leading truck for stability entering curves, two sets of eight driving wheels, and a four-wheel trailing truck to support the large firebox. According to Union Pacific senior manager of Heritage Operations Ed Dickens Jr., the 4-8-8-4 series originally was to have been called "Wasatch". One day while one of the engines was being built an unknown worker scrawled "Big Boy" in chalk on its front. With that, the legendary name was born, and has stuck ever since. Measuring 132 feet long and weighing one and one-quarter million pounds, the Big Boys were appropriately named. These were the largest and heaviest of their type and could pull a loaded 5-1/2 mile long train on level track. Their tenders carried a massive 28 tons of coal and 25,000 gallons of water; and with a heavy train a Big Boy could use all of this up in the first half of a 57-mile run. Although there were only 25 Big Boys ever built, they ran up a total of nearly 26 million miles in 18 years, hauling billions of tons.