One of filmmaker Carl Dudley’s earliest creations, Life Line of the Nation, produced for the Association of American Railroads, is a portrait of America's railroads during World War II. Here logistics are revealed to be one of the keys to victory. The film begins prior to the war, as meeting is held with members of the military and railroad officials. They are planning their strategy “should war come.” Shortly thereafter, an NBC broadcaster announces the attack on Pearl Harbor. A bit later, there is a teletype with the date 2/9/44 and a Red Cross truck is also seen with a date of 1944. Finally, at the end of the film, several newspapers are seen heralding the end of the war.

The film is basically a salute to America, its railroads, and the multitude of trains that criss-cross the nation. Patriotism and the love of all things RR abound. Here are a few quotes from the film:

-To a nation at war, nothing is more important than transport.

-It is a war of movement. Keep ‘em rolling.

-(America and its railroads will stop the) Nazi bid for world supremacy.

-This was no dress rehearsal. This was war.

-With its well rehearsed miracle, the railroads began rolling.

-(the railroads will) give dictators nightmares.

-On the home front, the battle of transport began.

-Railroads are the permanent strength of America.

-During the war railroads carried up to 100 times their normal daily load.

The film also shows lake carriers on the Great Lakes and other forms of transport including shipping.

Carl Dudley is mainly noted for his 1950s travelogues and industrial films. He was born on December 31, 1910 in Little Rock, Arkansas. He founded the Dudley Pictures Corporation, a film production company in 1944. In the 1950s, he produced thirty documentary shorts in the This World of Ours series. In 1958, he directed and produced the Cinerama feature South Seas Adventure. He died in 1973. 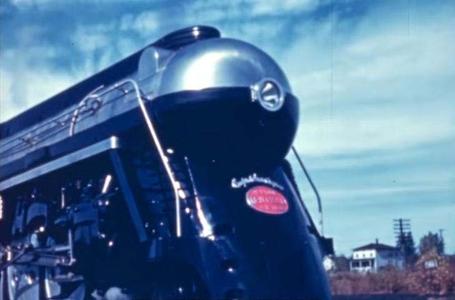