Take a 1950's luxury train trip from Chicago to Seattle on the "Super Dome Olympian Hiawatha", with footage in the diner, coaches, Super Dome, sky top car, and sleepers, running along the Dells, the Mississippi, and the electrified territory in the mountains. Visits are made to many tourist spots along the way. The streamlined Olympian Hiawatha replaced the Milwaukee's heavyweight Olympian train in 1947. The train was designed by industrial designer Brooks Stevens and included the distinctive glassed-in "Skytop" observation-sleeping cars. In 1952 the Milwaukee Road added full-length "Super Dome" cars to the train. While the Milwaukee Road heavily promoted the Olympian Hiawatha and its highly scenic route through Idaho and Montana's Bitteroot Mountains and the Cascade range in Washington, the railroad was faced with a highly competitive market that included the Great Northern Railway's Empire Builder and the Northern Pacific Railway's North Coast Limited, and the rapidly growing competition from airlines. The Olympian Hiawatha was never a financial success. On May 22, 1961, the train was discontinued, one of the first of the great named trains to end service in the 1960s. The films' full title is "Pacific Northwest Holiday on the Super Dome Olympian Hiawatha", it was produced by the Milwakee Road in 1952 to promote the new "Super Dome" cars. 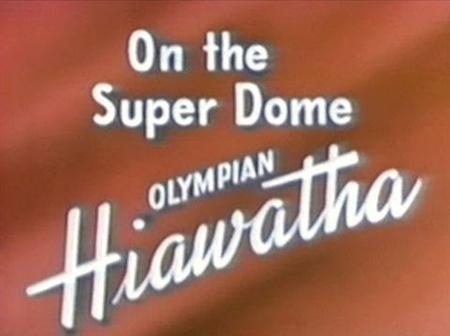