The Santa Fe Railroad (Atchison, Topeka and Santa Fe Railway), in conjunction with Dudley Pictures Corporation, presented the viewer with this color film, “Southern California Holiday.” Dating to the 1950s, the picture illustrates the theme of vacationing in sunny Southern California and using the Santa Fe railroad system to travel there. Narrated by voice actor Art Gilmore, the film opens with a Santa Fe train speeding down the track at mark 00:45 as the audience is told, “In all the world, there is probably no single area holding so much charm and beauty and the good things of life than Southern California.” What follows is a nearly non-stop presentation of the Golden State. Starting with Los Angeles, Gilmore explains how the “thrill of Southern California is in the air.” The viewer is treated to the “vast, seething metropolitan city” as cars race down non-congested freeways on their way to downtown LA, where they can take advantage of shopping or visit the Los Angeles Mission, shown at mark 01:33, or the familiar City Hall, shown at mark 01:40. The “Miracle Mile” of Wilshire Boulevard is up next, “one of Los Angeles’ most modern and important shopping centers before seeing shots of the famed Brown Derby Restaurant and the Ambassador Hotel, as well as the Griffith Park Observatory where “even for as deep a subject as astronomy, there are always keenly interested visitors day and night.”

At mark 03:10 we are taken to Forest Lawn Memorial Park, where visitors come to admire the landscaped grounds, walkways, churches, and chapels (not to mention the final resting place of countless celebrities), followed by the Huntington Library. At mark 04:10 the viewer sees the famed Grauman’s Chinese Theater in Hollywood, and we catch glimpses of the celebrated handprints and footprints of stars such as Gary Cooper, Shirley Temple, and Nelson Eddy, before visiting the headquarters of NBC and CBS starting at mark 04:47, and then the Hollywood Bowl, with a sunrise Easter service shown at mark 06:00.

“One of the more interesting aspects of Hollywood is the motion picture industry,” Gilmore tells the audience, as we see the exterior of RKO Radio Pictures, Paramount Pictures, Republic Pictures, Columbia Pictures, Warner Bros. Pictures, Universal Pictures, 20th Century Fox, Metro-Goldwyn-Meyer Studios. “Every line of business in the area benefits either directly or indirectly from the picture industry,” the audience is told. Scenes from the Sunset Strip and purveyors of maps to the stars’ homes follows, as do scenes of the unique architecture of Beverly Hills and at mark 08:15 a stop at the landmark Beverly Hills Hotel and Miramar Hotel. A polo field developed by humorist Will Rogers is next at mark 08:47, followed by a tribute to the state’s many golf courses and a visit to the University of California at Los Angeles.

Catalina Island, sailing on the Pacific Ocean, and tanning on the beaches are contrasted with ski slopes just a few hours away, as Gilmore touts California as a haven for fans of warm or cold weather activities. Hopalong Cassidy (William Boyd) visits a citrus fair at mark 13:00 while audiences later cram into the Los Angeles County Fair, enjoy horse racing at Hollywood Park and Santa Anita Park, or tour one of the state’s many missions.

“In the past brief quarter of a century, Southern California, aided mightily by the essential cooperation of the railroad, has undergone a truly awe-inspiring growth in its industrial life,” Gilmore continues at mark 17:25, stressing the state’s role as a manufacturer of automobile tires, “to keep the wheels of America turning.” Stockyards, oil drilling, chemical factories, steel foundries, and aircraft manufacturing are also key parts Southern California economy, as is tourism, especially to areas like La Jolla and San Diego. Among the latter’s many attractions — San Diego Zoo, which is shown at mark 20:45 as giraffes, elephants, and bears “smile” for the camera.

And just a “stone’s throw” away from San Diego … Tijuana, Mexico … “warm, typically Latin, and friendly to call,” the viewer is told at mark 22:27. “Tijuana is a colorful border town devoted to gayety.” Back in the USA, the film encourages visitors to Palm Springs, where such entertainers as Jerry Colonna and Leo Carrillo (of “The Cisco Kid” fame) are shown celebrating “Circus Week.” At mark 23:56, the viewer is reintroduced to the convenience of Santa Fe as “shining rails speed the traveler through this colorful panorama to New Year’s Day in Pasadena” and Tournament of Roses parade — just one more of the treasures of Southern California, “a land of sunshine and happiness, proudly and happily served by Santa Fe.” 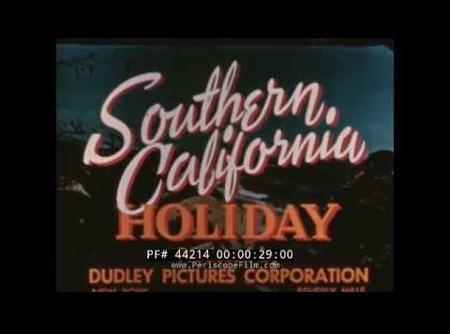