American Locomotive (Alco), General Electric, and the New York, New Haven and Hartford Railroad Company teamed up to create this 1950s color film promoting the aforementioned rail line. We see the rolling greens hills and valleys as well as the Atlantic coastline and farmland of Southern New England starting at mark 00:20 as the narrator explains how the region is the cradle of American liberty. Offering “a wholesome way of life” we’re told how the area is also known for its railroads as a train speeds past at mark 01:30, and that the New York, New Haven and Hartford Railroad Company is a reminder of the trains that made New England great. We learn of the first diesel electric switcher in New England at mark 01:50 and see passenger and freight trains as well as freight yards such as the Cedar Hill Yard in New Haven, Connecticut (mark 02:38) as the narrator touts their various upgrades and associated benefits. We learn how fright line schedules are coordinated with other railroad companies. The film visits a freight yard in Maybrook, New York, as cars are coupled with engines and cabooses. Near mark 06:00 the film looks at some of the obstacles train lines face, including operating at different elevations including within valleys, each presenting a different power need. At mark 06:45 we learn how diesel electric engines (like the one made by Alco and GE) have alleviated some problems and provide more motoring power while taking a detailed look at the behemoths. “What a powerful puller our diesel electric is,” the narrator boasts at mark 11:41, while continuing to explain how diesel engines make better time than steamers because they do not have to routine make stops for water. Such advancements, the viewer is reminded, are symbols of the train line’s “railroad leadership.” 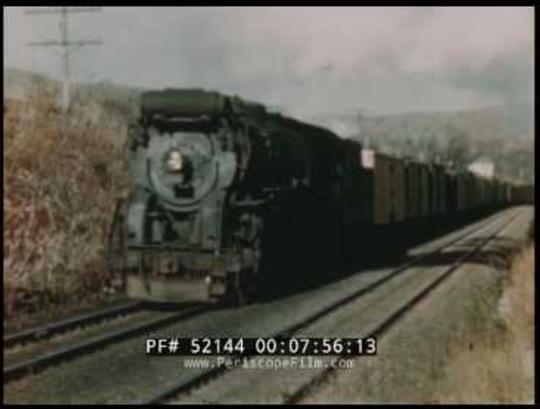