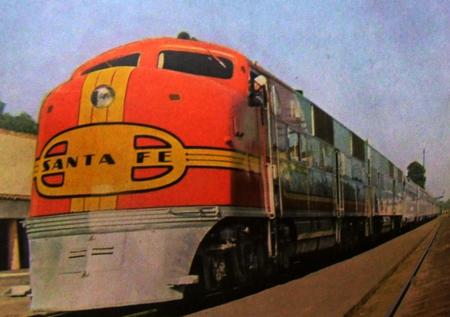 A promotional film produced for the Santa Fe Railway touting their beautiful streamlined Super Chief passenger train.The Super Chief was one of the named passenger trains and the flagship of the Atchison, Topeka and Santa Fe Railway. It claimed to be "The Train of the Stars" because of the celebrities it carried between Chicago, Illinois, and Los Angeles, California. The Super Chief (Nos. 17 & 18) was the first Diesel-powered, all-Pullman sleeping car train in America, and it eclipsed the Chief as Santa Fe's standard bearer. The extra-fare ($10) Super Chief left Dearborn Station in Chicago for its first trip on May 12, 1936. Before starting scheduled service in May 1937, the lightweight version of the Super Chief ran 2,227 miles from Los Angeles over recently upgraded tracks in 36 hours and 49 minutes, averaging 60 mph overall and reaching 100 mph.

With one set of equipment, the train initially operated once a week from both Chicago and Los Angeles. After more cars had been delivered the Super Chief ran twice weekly beginning in 1938 and daily after 1948. Adding to the train's mystique were its gourmet meals and Hollywood clientele. Competitors to the Super Chief were the City of Los Angeles on the Chicago and North Western Railway and the Union Pacific Railroad, and (to a lesser extent) the Golden State on the Rock Island and Southern Pacific. The Santa Fe Super Chief was one of the last passenger trains in the United States to carry an all-Pullman consist; only the Pennsylvania Railroad's Broadway Limited and the Illinois Central's Panama Limited survived longer. The train maintained its high level of service until the end of Santa Fe passenger operations on May 1, 1971.