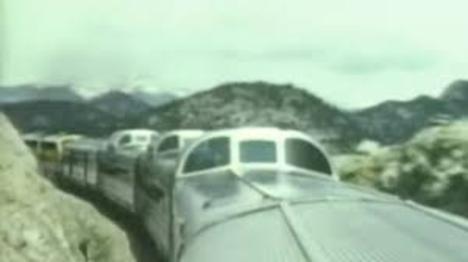 The Burlington, Rio Grande, and Western Pacific Railroads produced this tourism promotional film in the 1950's to highlight the California Zephyr luxury train, running between Chicago and San Francisco. The California Zephyr (the CZ, or "Silver Lady") was a passenger train operated by the Chicago, Burlington & Quincy (CB&Q), Denver & Rio Grande Western (D&RGW) and Western Pacific railroads, all which dubbed it "the most talked about train in America" on March 19, 1949, with the first departure the following day. It was scheduled to pass through the most spectacular scenery on its route in the daylight. The original train ceased operation in 1970, though the D&RGW continued to operate its own passenger service, the Rio Grande Zephyr, between Salt Lake City and Denver using the original equipment until 1983. Since 1983 the California Zephyr name has been applied to the Amtrak service, which operates daily and is a hybrid of the route of the original Zephyr and its former rival, the City of San Francisco.