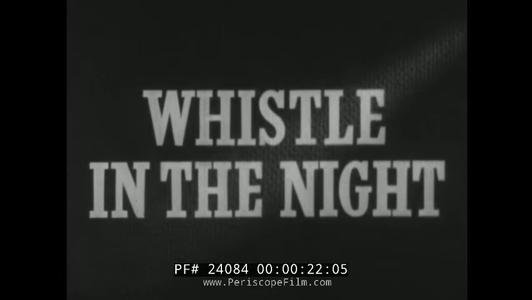 "Whistle in the Night"

Produced in 1947 by the Association of American Railroads and distributed by RKO Pathe as part of their "This Is America" series, "Whistle in the Night" takes a look at post-war American railroads during their conversion to peace. During the war, frantic efforts to move freight resulted in a huge maintenance backlog, and railroads at the close of the conflict found themselves operating under the handicap of little to no new equipment. The film looks past this era at the plans for the future, with swifter, safer and more comfortable traveling for the American public. Unfortunately, the advent of cheap air travel and bus service meant that the era of passenger service on America's railroads would be short-lived.

The film contains terrific shots of post-WWII railroads with a mix of steam and diesel locomotives, and the GG-1 electric locomotive also shown. Delivery of mail, freight, and passengers is seen, and you'll see all the logistics that go into moving all these goods and people.