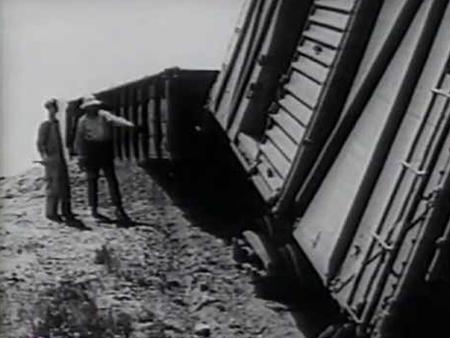 This is a fantastic old steam era safety film concerning working around railroad yards and tracks -- heavy on switching operations. Produced by the Great Northern Railway in the 1940s and probably filmed at St. Paul using actual employees.

Watch them getting on and off moving equipment, making drops, pulling pins, aligning couplers, lining switches, coupling air hoses and similar switching activities. See what was considered unsafe THEN and what was CONSIDERED SAFE back then that is now considered UNSAFE. Modern day railroad safety officers and trainmasters should probably NOT watch this video, lest they pass out or have a heart attack. It's not for the faint of heart or those who never worked under the old rules and safety instructions.

Beyond the safety aspect, the film is a wonderful insight to old railroad operations, clothing, steam locomotives, and railroad cars and equipment from log ago fallen flag railroads.

"Now don't crawl down under there son, why risk your life?"