Doodlebug
In the United States, doodlebug is the common name for a self-propelled railcar most commonly configured with both a passenger and freight compartment. Early models were usually powered by a gasoline engine, with either a mechanical drive train or a generator providing electricity to traction motors. After a number of years of service, it was common for Doodlebugs to be repowered with a diesel engine.

Doodlebugs sometimes pulled an unpowered trailer car, but were more often used singularly. They were popular with some railroads during the first part of the 20th century to provide passenger and mail service on lightly used branch lines, obviating the need to operate conventional trains consisting of a locomotive and coaches. Several railroads, mostly small regional and local networks, provided their main passenger services through doodlebugs in a cost cutting effort.

History
While interest in self-propelled cars did exist before the late 1910s in the form of the electric trolley and streetcar as well as a few other examples, the better portion of doodlebug usage in the United States can be traced to this time period. Electro-Motive, then in the form of the Electro-Motive Corporation as the General Motors purchase had not yet occurred, began the large scale production of self-propelled railcars using bodies manufactured by Pullman or the St. Louis Car Company. By the 1920s the gas-electric car had become one of the main providers of branch-line service.

Origin of term
The term "doodlebug" was given to the first successful motor car, the Union Pacific #1 McKeen Motor Car, built in late 1904 to March 1905. When the motor car first arrived for service in Kearney, Nebraska, the switchman looked at the Maroon colored, knife edge nose, gasoline motor car, and proclaimed, "Look at the potato bug." Although this is not when the doodlebug term was coined, it was probably around the same time that railroaders created this nickname.

Hoodlebug was a nickname used for small rail motor cars that provided commuter in parts of the United States. The name usually applies to such service in rural areas between towns or from towns to factories or mines before the advent of bus service. Hoodlebugs were also used for school students before the widespread use of school buses.

It appears this is a local vernacular term limited to mid-Atlantic and Midwestern states. Its etymology is uncertain, but it may be a variation of doodlebug, a railroad term for certain types of small, self-propelled cars.

A group of vehicles that provided similar service on the Rio Grande Southern were called Galloping Geese. Most of these were converted street vehicles while most hoodlebugs were similar in appearance and construction to Interurbans.

Doodlebug Disaster
The doodlebug disaster was a railway accident that occurred on July 31, 1940, in Cuyahoga Falls, Ohio, in the United States. A Pennsylvania Railroad, gasoline-powered "doodlebug" rail-car collided head-on with a freight train, the impact and resulting fire caused the deaths of all but three of the 46 on board.

Trains
The "doodlebug" concerned, No.4648, was a self-propelled gas-electric rail-car that used gasoline to power its traction motors and was built in 1928 by Pullman/Electro-Motive. It had departed Hudson at 5:49 p.m. on its usual 13-mile (21 km) run south to Akron on a warm summer evening. At the same time a freight train comprising 73 freight cars hauled by two locomotives and traveling from Columbus to Cleveland had departed Arlington in Akron heading north.

Collision
Sadly, within ten minutes both had met with disaster; the doodlebug should have pulled into a siding at Silver Lake to allow the freight to pass through the single track section of rail at that point; but instead it continued southward. Although both trains braked, their combined speed was 55 mph (89 km/h) when they collided at 5:58 p.m. The engineer, conductor and a railroad employee managed to jump free, though they were badly injured; but no-one else on the doodlebug survived. As the lead freight engine telescoped 12 feet (3.7 m) into the railcar, its 350-US-gallon (1,300 l; 290 imp gal) gasoline tank ruptured and sprayed the interior of the coach with burning fuel, as the doodlebug was pushed over 500 feet (150 m) up the track by the momentum of the heavy freight train (which remained on the track); and caused flames to shoot-out twenty-five feet (7.6 m) in all directions. The medical examiner determined that only nine passengers were killed on impact, the rest were burned to death. Firemen fought the blaze for 45 minutes, but it would be several hours before the bodies could be removed; most required saws to separate them from the seats to which they had been fused by the flames. Ambulances soon gathered at the scene, but there were only the three railroad employees to take to hospital; instead, the charred bodies were taken to funeral homes.

Investigation
The doodlebug engineman survived and was able to recall receiving orders at Hudson to take the siding at Silver Lake, but he was unable to recall passing the siding. The investigation considered the possibility that the engineer could have been "under the influence of carbon monoxide poisoning with a resultant temporary impairment of mental faculties, but not be wholly unconscious", which would explain his behavior. The driver had complained of fumes in the cabs on previous occasions and no charges were filed.

Memorial
In 2005 a memorial monument was erected near the site of the disaster on its 65th anniversary. The memorial was the result of a school project by three 13-year-olds at Sill Middle School, which led a fund raising campaign to establish a permanent memorial to those killed in the disaster. 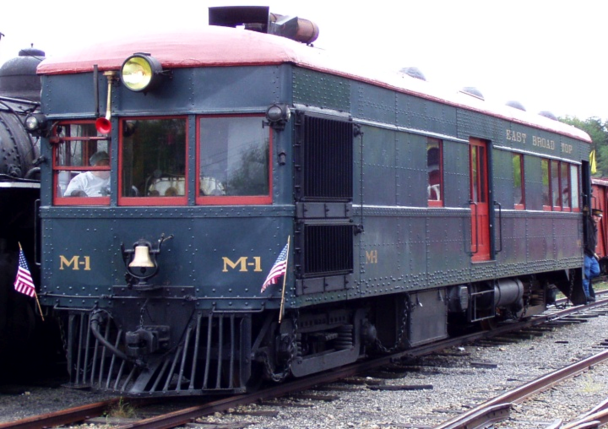 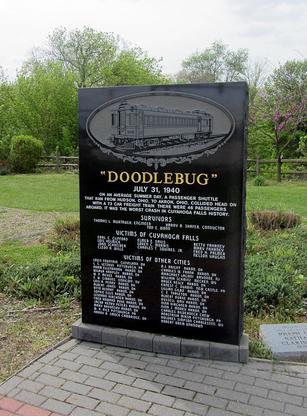 East Broad Top No. M1 is a narrow gauge gas-electric doodlebug that was constructed by EBT from a Brill manufactured kit.

By The original uploader was N2xjk at English Wikipedia - Transferred from en.wikipedia to Commons by Quatro Valvole., CC BY-SA 3.0, https://commons.wikimedia.org/w/index.php?curid=3593736