The highlight of the Chicago Railroad Fair was the "Wheels A-Rolling" pageant. This was a dramatic and musical presentation intended to showcase the development of transportation and the railroads across the country beginning with trails and waterways. The pageant included a recreation of the Golden Spike ceremony at Promontory, Utah, and various historic rolling stock and replicas of equipment in operation.

In addition to being the last great assembly of railroad equipment and technology by participating railroad companies, the 1948 Chicago Railroad Fair holds a lesser known honor and connection to Disneyland. In 1948 Walt Disney and animator Ward Kimball attended the fair. To their enjoyment they not only got to see all of the equipment, but they were also allowed to operate some of the steam locomotives that were at the Fair. Upon their return to Los Angeles, Disney used the Fair, the House of David Amusement Park, and Greenfield Village, as inspiration for a "Mickey Mouse Park" that eventually became Disneyland. Walt also went on to build his own backyard railroads, building the Carolwood Pacific Railroad. Kimball already had his own, named Grizzly Flats Railroad. 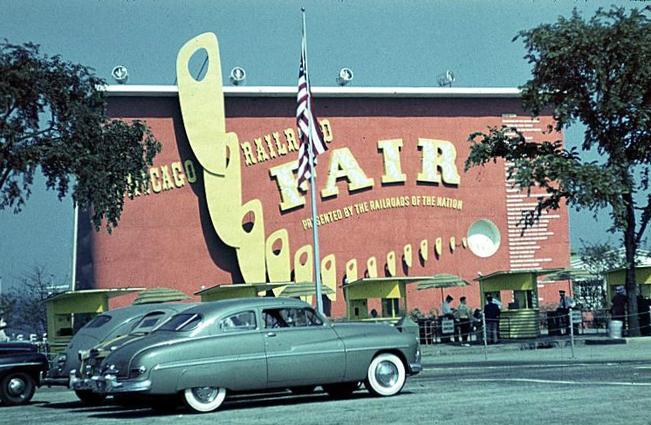 The Wheels A-Rolling pageant from the Chicago Railroad Fair.

Chicago Railroad Fair
The Chicago Railroad Fair was an event organized to celebrate and commemorate 100 years of railroad history west of Chicago, Illinois. It was held in Chicago in 1948 and 1949 along the shore of Lake Michigan and is often referred to as "the last great railroad fair" with 39 railroad companies participating. The board of directors for the show was a veritable "Who's Who" of railroad company executives.

History of the fair
The origin of the fair traces back to the Chicago and North Western Railway (CNW), which at the time was the successor of the first railroad to operate out of Chicago, the Galena and Chicago Union Railroad. CNW was seeking a way to commemorate 100 years of railroading in Chicago, especially as it was done on the CNW itself. Public Relations Manager F.V. Koval is credited with developing the idea behind the fair. The CNW advertising and public relation staff went to work to promote the show in the early months of 1948, beginning with a series of photographs made by company photographer Don Lidikay of people in 19th century costumes posing with the locomotive Pioneer, which had pulled the first train out of Chicago in 1848.

The fair was rapidly planned during the winter and spring of 1948, and originally scheduled to run between July and August of that summer. Erected on 50 acres (200,000 m2) of Burnham Park in Chicago between 21st and 31st Streets, the fair opened after only six months of planning. A grand opening for the fair commenced on July 20 with a parade that featured such spectacles as a military marching band and a replica of a troop train, a contingent of cowboys and Native Americans, a replica of the Tom Thumb, the first American locomotive, and the spry, octogenarian widow of Casey Jones, who served as honorary Grand Master of the parade. One dollar was the price of admission, and, except food, all the attractions, displays, exhibits and shows were free. Besides the thirty-nine railroads who participated in the fair, there were more than twenty equipment manufacturers, including General Motors. The Santa Fe also sponsored an Indian Village where Native Americans sold handicrafts, staged dances, and explained the different types of lodging that were on display.

A highlight of the fair was the presence of the Freedom Train.The Freedom Train traveled the country from September 17, 1947, through Jan 22, 1949, and was at the Railroad Fair from July 5 – 9. It held many documents and artifacts from the National Archives. Available for public viewing were the original United States Constitution, Declaration of Independence and the Bill of Rights. Security of the documents was the responsibility of the Marine Corps.

The fair's directors included (in alphabetical order by surname):