​A fallen flag is a North American railroader and railfan term for a railroad company that is no longer in business due to bankruptcy or merger.

Background
The U.S. railroad industry has been consolidating since the 1940s, and almost every year, the list of operating roads shrinks. Most railroad companies that once existed have either closed, been assimilated by a larger company, or participated in a "merger of equals" in which neither company's name survived unaltered (an example of the latter being the Burlington Northern / Santa Fe merger, which produced the Burlington Northern and Santa Fe Railway, now known as the BNSF Railway). Before World War II, there were over 140 Class I railroads operating in the U.S. (at the time a railroad was given Class I status if it earned at least $1 million in revenue annually).

As an indication of the level of consolidation that has taken place, only four Class I railroads (then, railroads with over a million dollars in income per year) from before the Great Depression still exist under their original names, these being the:

However, as railroads merge or buy each other, duplicate and less profitable rights of way often are sold to new short line railroad companies. Yet, even these short lines themselves merge and buy each other, creating even more fallen flags. For example, many of the former Milwaukee Road branch lines in southern Wisconsin were sold to a railroad called the Wisconsin and Calumet Railroad (WICT). The WICT is now itself a fallen flag, its rights of way now operated by the Wisconsin and Southern.

Historic trademarks
In the case of a merged or purchased railway, the new owner sometimes tries to enforce the trademarks of the old name to collect royalties from model railroad manufacturers. However, this violates trademark law, which requires that owners actively use marks for them to remain protected and not fall into the public domain.

To prove that historic trademarks are still enforceable, some railroads have begun painting pieces of rolling stock in the liveries of their constituent railroads. No court case has decided whether this is sufficient to prove that a mark is not abandoned.

The defunct railroads (commonly known as "fallen flags") of North America regrouped several railroads in Canada and the United States. Here is a partial list of past railroad companies. (More links coming soon)

Defunct Railroads of the United States Listed by State 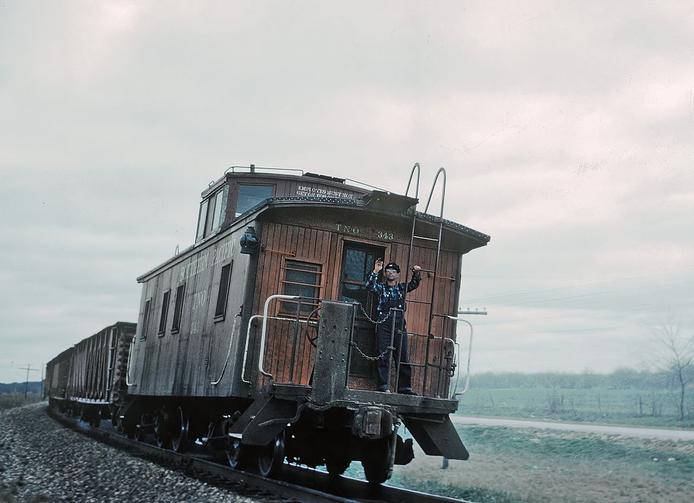 A Texas and New Orleans RR caboose on eastbound local  No. 86 near LaCoste, TX in 1960. Photo by Roger Puta.