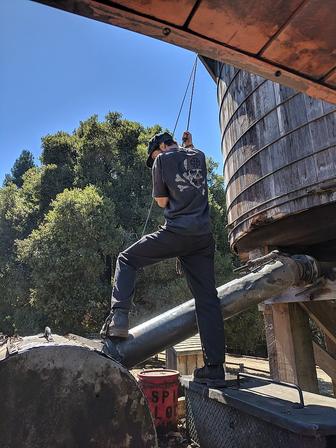 A fireman refills the water tank from a water tower on the Shay locomotive No. 1, "Dixiana", at Roaring Camp and Big Trees Narrow Gauge Railroad.

A fireman is a person whose occupation it is to tend the fire for the powering a steam engine. Much of the job is hard physical labor, such as shoveling fuel, typically coal, into the boiler's firebox.

On steam locomotives, firemen were not usually responsible for initially preparing locomotives and lighting their fires. As a locomotive boiler takes several hours to heat up, and a too-rapid fire-raising can cause excess wear on a boiler, this task was usually performed by fire lighters working some hours before the fireman's main shift started. Only on small railways, or on narrow-gauge locomotives with smaller and faster-warming boilers, was the fire lit by the fireman.

Whoever was responsible for fire-starting would clear the ash from the firebox ashpan prior to lighting the fire, adding water to the engine's boiler, making sure there is a proper supply of fuel for the engine aboard before starting journeys, starting the fire, raising or banking the fire as appropriate for the amount of power needed along particular parts of the route, and performing other tasks for maintaining the locomotive according to the orders of the engineer. The engine itself was cleaned by an engine cleaner instead of the fireman. Some firemen served these duties as a form of apprenticeship, aspiring to be locomotive engineers themselves. In the present day, the position of fireman still exists on the Union Pacific Railroad, but it refers to an engineer in training. The fireman may operate the locomotive under the direct supervision of the engineer. When the fireman is not operating the locomotive, the fireman assists the engineer and monitors the controls.

Mechanical stoker
A mechanical stoker is a device which feeds coal into the firebox of a boiler. It is standard equipment on large large steam locomotives to ease the burden of the fireman. The locomotive type has a screw conveyor (driven by an auxiliary steam engine) which feeds the coal into the firebox. The coal is then distributed across the grate by steam jets, controlled by the fireman.