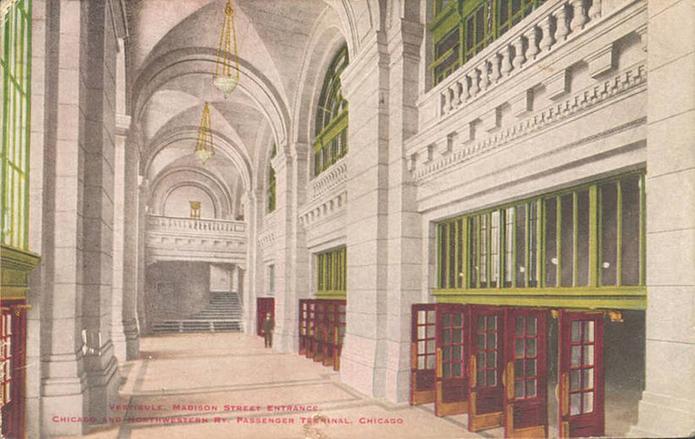 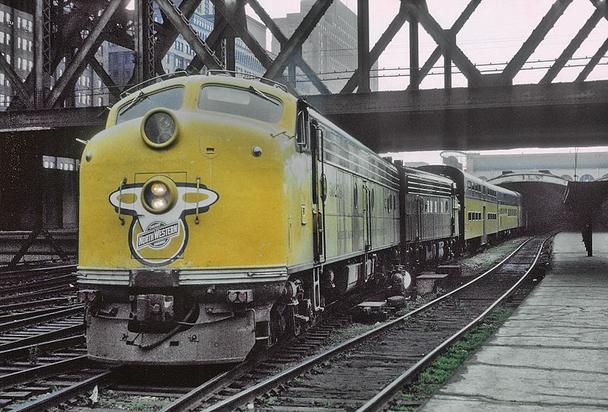 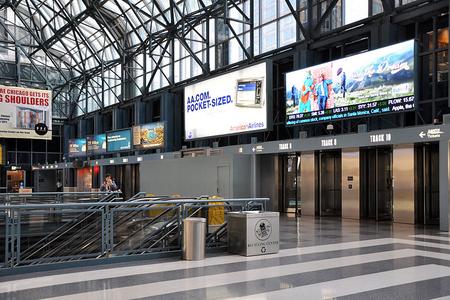 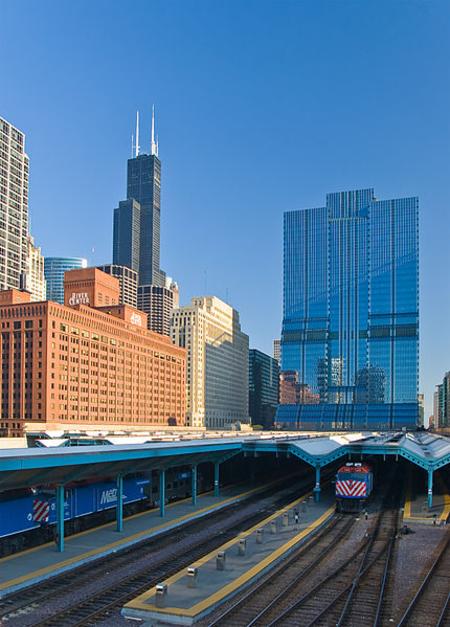 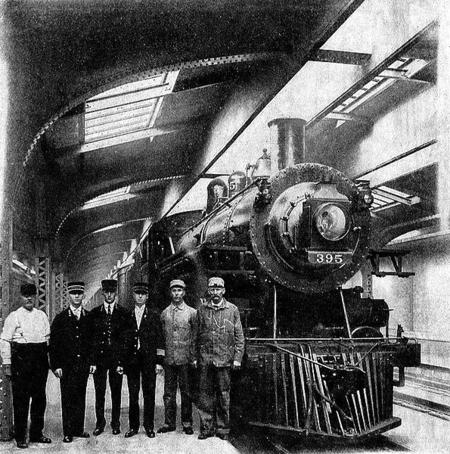 The first North Western train and its crew to depart Chicago and North Western Terminal which was completed by the railroad in 1911.

The Richard B. Ogilvie Transportation Center is a commuter rail terminal in downtown Chicago, Illinois. It is the terminus for the three commuter rail lines of Metra's Union Pacific District to Chicago's northern and western suburbs, which approach the terminal elevated above street level. It occupies the lower floors of the 500 West Madison Street building. The building occupies two square blocks, bounded by Randolph Street and Madison Street to the north and south and by Canal Street and Clinton Street to the east and west. It is the second busiest rail station in Chicago, after nearby Chicago Union Station, and fifth-busiest in the United States.

The station's 16 tracks were elevated above street level and "reached by six approach tracks and sheltered under an 894-foot-long Bush train shed." The upper level of the head house housed a concourse and other facilities for intercity passengers, including "dressing rooms, baths, nurses and matrons rooms, and a doctor's office." The centerpiece of the upper level was a stately waiting room, measuring 201 by 202 feet (34 by 62 meters), and rising 84 feet (approx. 26 meters) to its barrel-vaultedceiling. In addition to the main concourse on the upper level, there was a street-level concourse for commuters.

During the heyday of rail travel, the Chicago and North Western Terminal was home to the C&NW's trains to Milwaukee,  Minneapolis-St Paul, Madison and other cities of the upper Midwest, including the railroad's premier "400" series of trains. Until October 30, 1955, it was also the Chicago terminus of the trains the Union Pacific ran in conjunction with the C&NW, including the Overland Limited and the famed "City" trains. See below for some of the best known of the trains served by this station.

The 1984 station
In 1984, the head house was razed and replaced with the glass-and-steel 42-story Citicorp Center (now 500 West Madison), which was completed three years later in 1987. However, much of North Western Station's rail structure was below street level, so Metra service was maintained with only minor interruptions during construction–following the example of the renovation of New York Penn Station.

The station was renamed the Ogilvie Transportation Center in 1997, two years after the C&NW merged into the Union Pacific Railroad. The station was named for Richard B. Ogilvie, a board member of the Milwaukee Road and a lifelong railroad proponent, who, as governor of Illinois, created the Regional Transportation Authority, which is the parent agency of Metra. However, many longtime Chicago-area residents still call it "North Western Station," and many longtime employees simply call it "CPT"–short for "Chicago Passenger Terminal."

1991 rehabilitation
In 1991 Metra purchased the train shed from Chicago and North Western and conducted a survey to determine the condition. The examination included necessary repairs to improve its structural integrity and redesign measures to bring the station up to modern mass-commuting standards. After completing a thorough evaluation, Metra, the Urban Mass Transportation Administration, and the Illinois Department of Transportation decided to completely replace the existing structure and in 1992, with the assistance of Federal funding, a contractor and management team were selected to begin the work.

Many engineering challenges had to be addressed and resolved, not only because of the train shed's prominent location but also due to its high traffic volume as it was to remain operational to 45,000 daily commuters during the project. Such challenges included the removal of original lead paint, the complete replacement of all 16 tracks (serving 200 trains a day), extensive structural steel repairs (under load), erection of a new steel canopy, complete exterior masonry restoration, new electrical and plumbing systems, and construction of a new pedestrian concourse. During the rehabilitation project, which lasted four years and cost $138 million, over 60 contractors spent more than 800,000 man-hours performing repairs and producing new construction.

Platforms and tracks
The station has 16 tracks with eight island platforms, each island platform servicing two tracks. Not all the platforms are the same length; the platforms on the western part of the station (tracks 1-10) are significantly longer than the eastern platforms. In general, West Line trains depart from the western platforms (roughly tracks 1-5), Northwest Line trains depart from the middle tracks (6-11), and North Line trains depart from the eastern tracks (12-16). This is done so that departing and arriving trains do not have to make large switch movements, which would block the use of other tracks and prevent multiple trains from arriving and departing at the same time. Just north of the station, the number of tracks reduces from 16 to six. Switches allow for trains on any of the 16 station tracks to end up on any of these six tracks, and vice versa. About a third of a mile from the station, the six tracks split into two mainlines of four tracks. One mainline turns west, while the other turns northwest. West Line trains take the west tracks, while Northwest and North Line trains take the northwest tracks.

Services
Except from late 1969 to mid-1971, only the Chicago and North Western Railway used the terminal.

The Chicago and North Western Terminal has served as a terminal for all the commuter and intercity trains of the Chicago and North Western Railway. In addition, on November 9, 1969, the day after Grand Central Station closed, the Baltimore and Ohio Railroad and Pere Marquette Railway, Grand Central's two remaining users, moved their remaining intercity services into the C&NW's terminal. Those trains, which used the C&NW's branch to the St. Charles Air Line west of Western Avenue, last ran on April 30, 1971, the day before Amtrak took over most intercity passenger trains in the U.S. Amtrak services over the lines of those two railroads have run into Union Station. 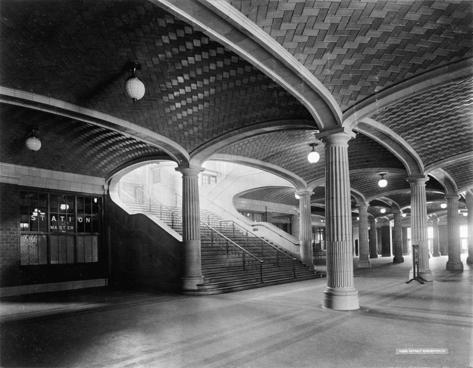 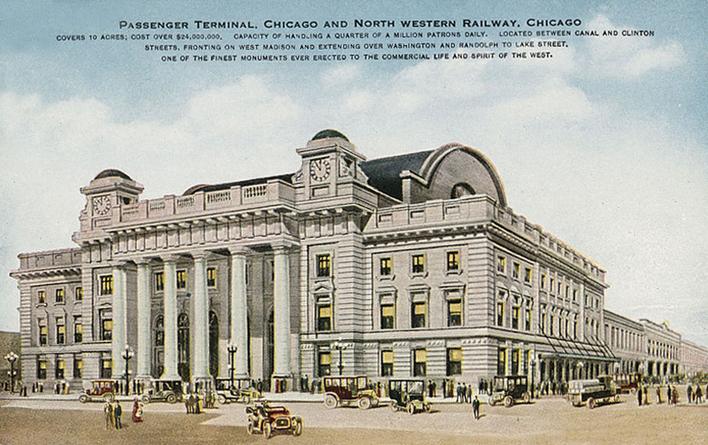 A postcard depiction of the Chicago and North Western Passenger Terminal, circa 1912-14.