The interior of Seattle King Street Station after remodeling, December 2014. 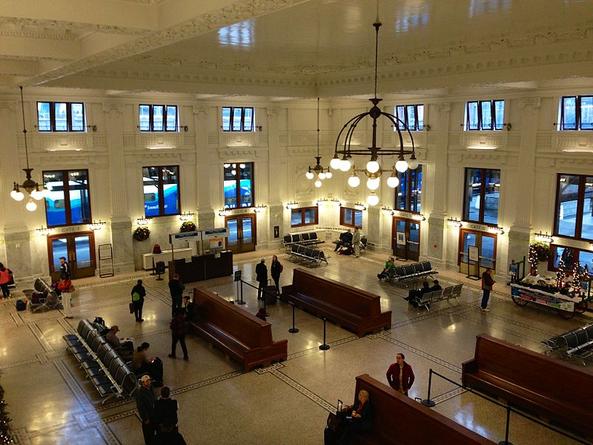 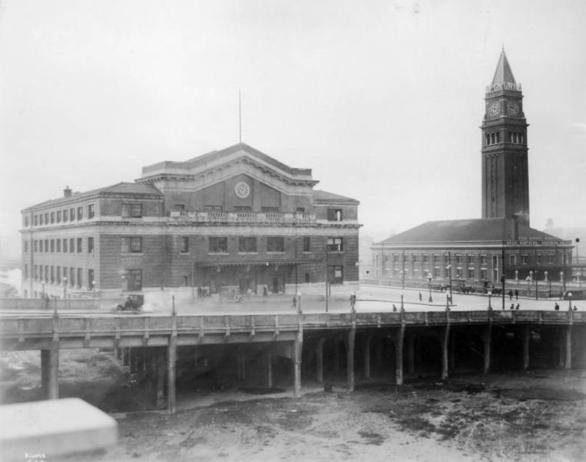 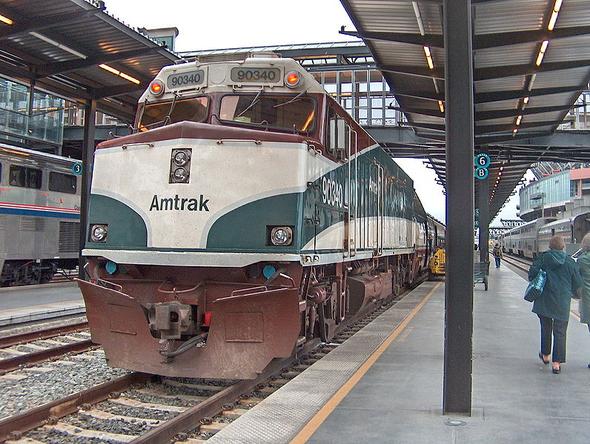 By Peterhuocean11 at English Wikipedia - Own work, Public Domain, https://commons.wikimedia.org/w/index.php?curid=10516903

A view of King Street Station from the southeast, May 2007. 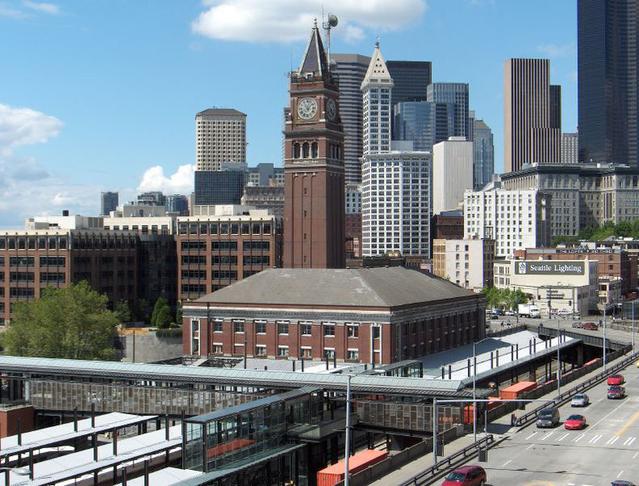 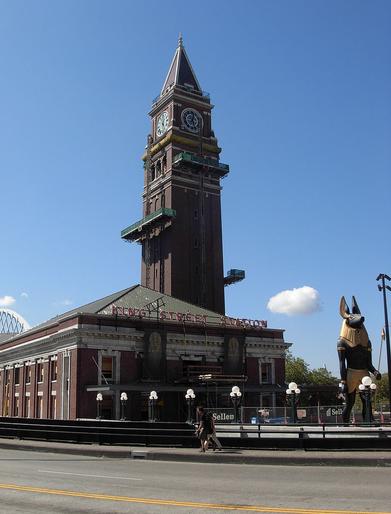 King Street Station
King Street Station is a train station in Seattle, Washington. Located between South King and South Jackson streets and Second and Fourth Avenues South in the Pioneer Square neighborhood of Seattle, the station is just south of downtown. Built between 1904 and 1906, it served the Great Northern Railway and Northern Pacific Railway from its grand opening on May 10, 1906, until the creation and start of Amtrak on May 1, 1971. The station was designed by the St. Paul, Minnesota architectural firm of Charles A. Reed and Allen H. Stem, who were later associate designers for the New York Central Railroad's Grand Central Terminal in New York City. King Street Station was Seattle's primary train terminal until the construction of the adjacent Oregon & Washington Depot, later named Union Station, in 1911. King Street Station was added to the National Register of Historic Places and the Washington Heritage Register in 1973.

Since the early 1990s the station was in various states of repair to undo remodels done during the middle of the Twentieth Century to "modernize" the facility, including the restoration of the elegant main waiting room. King Street Station was purchased by the City of Seattle in 2008 for $10 and, with enough funds finally in place, the restoration was finally completed in 2013.

The station is served by Amtrak Cascades, Empire Builder, and Coast Starlight trains, and by Sound Transit's Sounder commuter trains. King St. Station is also the Seattle terminus for the Rocky Mountaineer's luxury excursion train, the Coastal Passage. In 2017, Seattle was the 15th busiest station in the national Amtrak System.

History
Built between 1904 and 1906 by the Great Northern Railway and Northern Pacific Railway, the station replaced an antiquated station on Railroad Avenue, today's Alaskan Way. Designed by the firm of Reed and Stem of St. Paul, Minnesota, who acted as associate architects for the design of Grand Central Terminal in New York City, the station was part of a larger project that moved the mainline away from the waterfront and into a 5,245 foot (1,590 m) tunnel under downtown. The depot's 242-foot (74 m) tower was modeled after Campanile di San Marco in Venice, Italy, making it the tallest building in Seattle at the time of its construction. This tower contained four huge mechanical clock faces built by E. Howard & Co. of Boston, Massachusetts, offering the time to each of the four cardinal directions. At the time of installation it was said to be the second largest timepiece on the Pacific Coast, second only to the Ferry Building in San Francisco, California. Later, this tower also served as a microwave tower for the Burlington Northern Railroad, the successor of both the Great Northern and Northern Pacific railways, whose offices occupied the second and third floors of the station.

After the end of World War II, as passenger rail travel began to decline across the United States, steps were taken to gradually modernize King Street Station. The ticket counters, once located directly to the east of the compass room, were expanded outward into the waiting room. In the late 1940s a set of "electric stairs" and a new side entrance to the second floor railroad offices were built over the open stairwell to Jackson Street, narrowing them by half. Over the next two decades, as train ridership and the station's number of employees dwindled, the station was further remodeled to reduce maintenance and heating costs. In the late 1950s the station's original high-back benches, made of yellow oak, were replaced by modern chrome and plastic seats. The final blow occurred in the late 1967 when, under the direction of Northern Pacific Architect A.C. Cayou, a new drop ceiling of plastic and metal was installed in the waiting room ten feet below the original, concealing the hand-carved coffered ceiling to just below the balcony and second level arcade. Hundreds of holes had to be punched through the plaster to attach the ceiling's support wires to the steel frame of the building. The new ceiling held new fluorescent lights and heat lamps, replacing the original brass chandeliers and sconces. Below the new ceiling, plaster reliefs, marble panels, glass tile mosaics and other original fixtures were sheared from the walls and replaced with sheet rock. The only original remaining features left visible in the main waiting area were the terrazzo tile floor and the clock on the west wall above the restrooms.

Despite the attempted modernization, the station continued to deteriorate. Following the creation of Amtrak in 1971 to take over the money-losing passenger service from the railroad companies, hundreds of routes were eliminated and service across the country was cut in half. In Seattle all service was consolidated to King Street Station, leading to the closure of the nearby Union Station, which formerly served Union Pacific and Milwaukee Road. To further cut costs the station's restaurant, lunch counter, and gift shop were immediately closed and vending machines installed.

From a practical standpoint, the station is close to downtown. However, unlike cities such as Boston, it is not near the intercity bus terminal, although the station is less than a block from the International District/Chinatown station of the Downtown Seattle Transit Tunnel serving the Link Light Rail Central Link route and King County Metro & Sound Transit Express bus routes. The station is also close to the First Hill line of the Seattle Streetcar network. For many years, the original upper entrance off of Jackson Street was not used. Instead, the main entrance was located on the first floor off of a small parking lot, rather than a drop off loop.

Restoration
Plans to restore the entire building to its former prominence, including cosmetic renovations to both the station interior and exterior, began in 2003. As part of these renovations the Compass Room and restrooms were refurbished, and the exterior awnings were replaced. New mahogany entry doors and wood framed windows were installed in the waiting room and Compass Room. New brass door hardware and reproduction period light fixtures and plaster decorative work were included to reproduce the former character of the station's interior.

In November, 2006, the Office of Seattle Mayor Greg Nickels announced a preliminary agreement between the City of Seattle and BNSF Railway to purchase the station for $1. The Seattle City Council formalized the agreement by passing legislation in December, 2006. The deal, revised to $10, was signed March 5, 2008. The purchase by the city freed up $19 million of state and federal funds that was used for further restoration of the station. The city earmarked a further $10 million for the restoration as part of a passed local transportation tax.

In 2008, the clocks in the clock tower were repaired, and the old radio microwave antennas were removed. Repair work to the exterior continued as of June 2010. Phase two of the project began in May 2010, when demolition work commenced on the second and third floors, previously used by Burlington Northern for division offices. Work on modernizing the baggage area, originally used as a restaurant, were also undertaken during this time. During June 2010, work also began on demolition of a 1950s addition to the building that housed the escalators and part of the Jackson Street Plaza. Demolition work was completed by September 2010. A surprise development during this phase was the removal of the suspended ceilings in early July. Crews worked over several nights while the station was mostly empty removing the over 1,600 acoustic tiles and their framing. The modern light fixtures and remaining suspended wires remained until enough funding became available to complete restoration. The final phase of the project focused on the rebuilding of the Jackson Plaza. Thirty-six geothermic wells reaching 300 ft (91 m) into the ground were drilled to eventually heat and cool the station. A new concrete floor was poured including seismic wall supports and space for an elevator and new ticketing and baggage areas.

In October 2010, the King Street Station project was awarded $18.2 million from $2.4 billion in high-speed intercity passenger rail service funding announced by the U.S. Transportation Department. This funding was needed by the project in order to complete seismic regrades and to finalize the restoration of the interior. The restoration project was completed and the station was officially rededicated on April 24, 2013.

Architecture
King Street Station is a red brick masonry and steel frame building with terra cotta and cast stone ornamentation, through relatively subdued in comparison to the clock tower. The entire first floor exterior is brick-clad with granite. The building is L-shaped with the clock tower marking the main entry on the west facade. The clock tower and main entry terminate the axis of King Street in Pioneer Square. The architectural style is sometimes denoted as "Railroad Italianate" with definite Italian inspirations in the clock tower while the base shows influences of Beaux Arts.

Inside the main entry, at the base of the clock tower, is the entry hall, known as the Compass Room. The name references the navigational star compass rose design laid out in hand-cut marble tiles on the floor at its center. The Compass Room is decorated with marble wainscott and is lighted by a multi-globe chandelier suspended above the compass rose from an elaborate plaster rosette. Triple-globe wall sconces around the perimeter illuminate a band of inlaid green iridescent glass tile on the walls. Circular clerestory windows are trimmed in plaster relief decoration. This motif was originally repeated throughout most of the station's waiting room. While there is no known influence for the design of the interior, it resembles the ceiling of the famous Salone dei Cinquecento at the Palazzo Vecchio in Florence, Italy featuring a similar coffered grid with dentils and repeating circles.

Nearby places of interest: