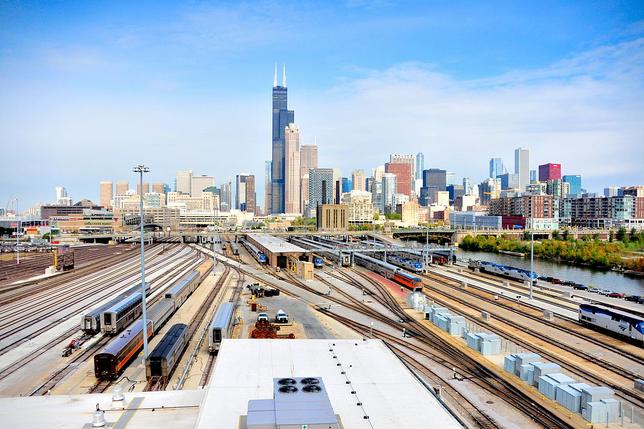 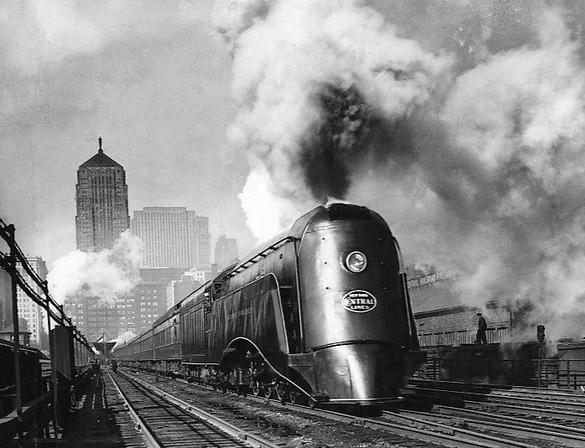 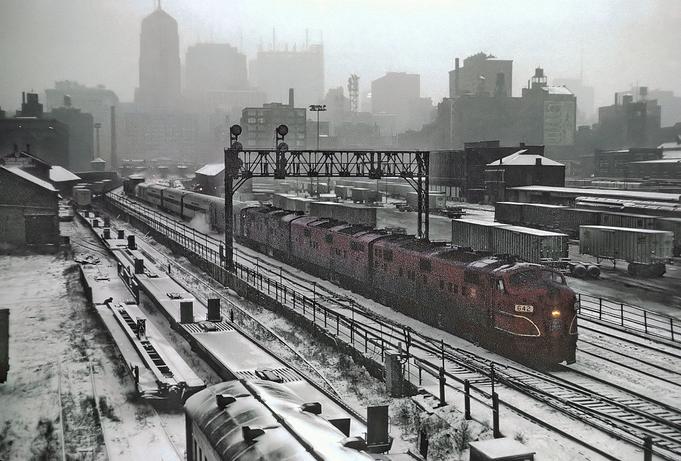 The station as rebuilt circa 1871 and demolished circa 1903. 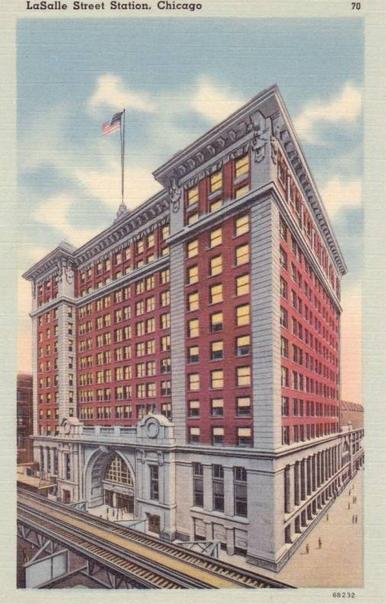 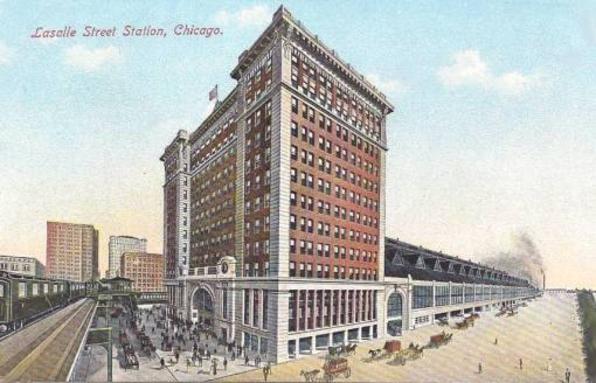 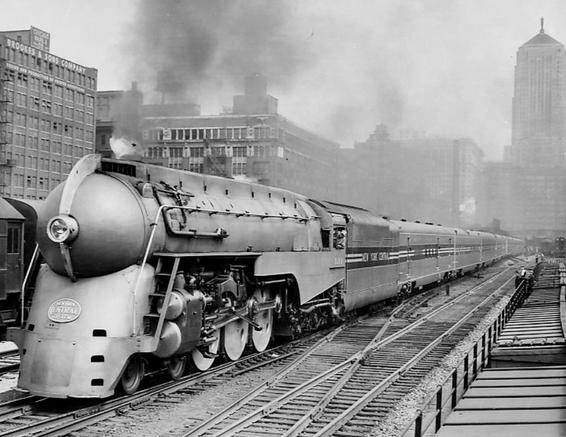 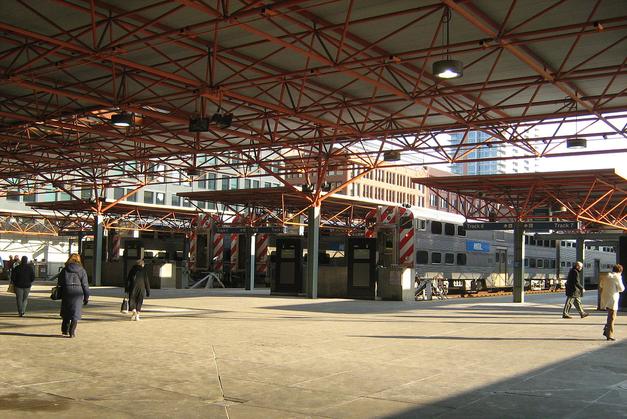 The Train Shed at Chicago's LaSalle Street Station, circa 1910.

Metra 410 idles in Lasalle Street Station under a backdrop of skyscrapers, after bringing a late evening train from Joliet.

By Russell Sekeet (Metra 410Uploaded by Mackensen) [CC BY 2.0  (https://creativecommons.org/licenses/by/2.0)], via Wikimedia Commons 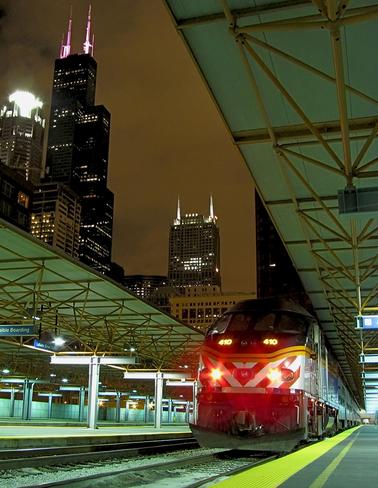 The 20th Century Limited being pulled out of LaSalle Street Station by the Commodore Vanderbilt locomotive. 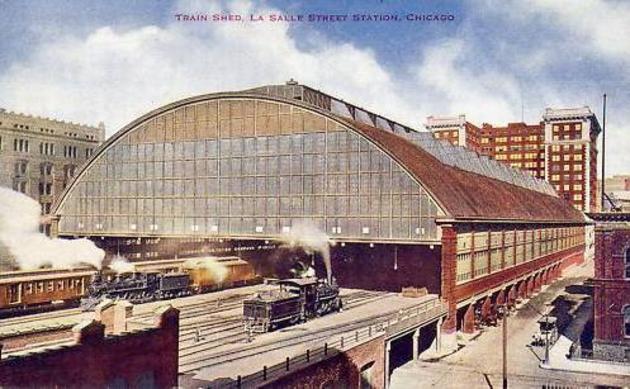 LaSalle Street Station on Van Buren between Sherman and LaSalle, circa 1940. 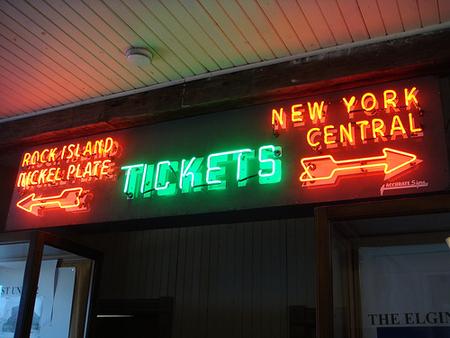 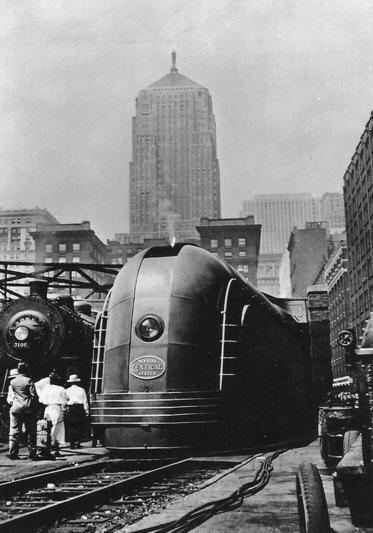 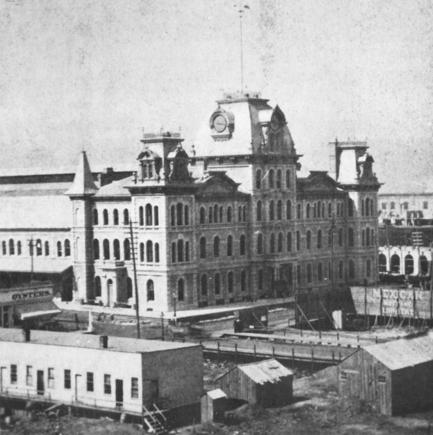 LaSalle Street Station
LaSalle Street Station is a commuter rail terminal at 414 South LaSalle Street in downtown Chicago. It was a major intercity rail terminal for the New York Central Railroad until 1968, and for the Chicago, Rock Island and Pacific Railroad until 1978, but now serves only Metra's Rock Island District. The present structure became the fifth station on the site when its predecessor was demolished in 1981 and replaced by the new station and the One Financial Place (now FOUR40) tower for the Chicago Stock Exchange. The Chicago Board of Trade Building, Willis Tower and Harold Washington Library are nearby.

History
The first station on the site opened on May 22, 1852, with the completion of the Northern Indiana and Chicago Railroad. On October 1, 1852, the Chicago and Rock Island Railroad began using the station. The two railroads later became the Lake Shore and Michigan Southern Railway (New York Central Railroad) and Chicago, Rock Island and Pacific Railroad. North of a junction at Englewood Station, both companies' lines ran parallel to the terminal.

In December 1866 a new station opened. The Great Chicago Fire of October 1871 destroyed the station, which was rebuilt shortly afterwards. The post-fire station was demolished to make way for a new station designed by the architectural firm Frost & Granger which opened July 1, 1903 and stood until 1981. This station was a set for Alfred Hitchcock's 1959 North by Northwest, starring Cary Grant and Eva Marie Saint, and in the 1973 movie The Sting starring Paul Newman and Robert Redford.

From its completion in 1882, the New York, Chicago and St. Louis Railroad (Nickel Plate Road) ran over the Lake Shore and Michigan Southern Railway from a junction at Grand Crossing neighborhood north to downtown Chicago, where it had its own terminal south of LaSalle. The LS&MS quickly gained control of the Nickel Plate, and later allowed it into its LaSalle Street Station as a tenant. In July 1916 the by then New York Central sold the Nickel Plate to the Van Sweringens, but it continued to operate into LaSalle until the end of Nickel Plate passenger service.

From July 31, 1904, to August 1, 1913, trains of the Chicago and Eastern Illinois Railroad also used LaSalle Street Station, which reached it via trackage rights on the Chicago, Rock Island and Pacific from Ashburn.

On January 18, 1957, trains of the Michigan Central Railroad began serving LaSalle, operating on the New York Central Railroad's Lake Shore and Michigan Southern Railway from its former crossing at Porter, Indiana to Chicago. LS&MS and Michigan Central trains (both part of the New York Central system) last used LaSalle on October 26, 1968, (soon after the merger into Penn Central); the next day it began operation into Union Station via a connection in Whiting, Indiana and the Pittsburgh, Fort Wayne and Chicago Railway.

Most intercity rail service at La Salle ended on May 1, 1971, when Amtrak consolidated long-distance services at Union Station. Rock Island opted-out of Amtrak and continued to operate intercity service from LaSalle until 1978.

A connection at Englewood Station was completed October 15, 1971, to allow the Chicago, Rock Island and Pacific Railroad to also operate over the PFW&C to Union Station, but the failing Rock Island decided to continue using LaSalle. Now only commuter trains on Metra's Rock Island District serve the station.

From 1972–75 the Rock Island operated a restaurant called Track One using two former railroad cars parked on track 1 at the station. The two cars, the dining car Golden Harvest and the club-lounge Pacific Shore, had previously served on the Golden State Limited.

Although only Metra's Rock Island District trains now use LaSalle, additional service is planned. Metra's proposed SouthEast Service would terminate at LaSalle, and the Chicago Region Environmental and Transportation Efficiency Program (CREATE) infrastructure improvement program would allow trains from Metra's SouthWest Service to use the terminal.

In June 2011, The Chicago Department of Transportation opened the LaSalle/Congress Intermodal Transfer Center alongside the station as a bus terminal to serve people transferring to CTA buses as well as Blue Line trains at LaSalle.

On father's day weekend in June 2017, Nickel Plate 765 became the first steam locomotive to enter LaSalle Street Station since Southern Railway 4501 visited the station in 1973. The 765 pulled trips to Joliet, Illinois over METRA's Rock Island District dubbed the Joliet Rocket. One of the cars in this excursion train was the former New York Central observation car Hickory Creek, a car built for the 20th Century Limited which hadn't been to the station since 1968. Of note, the Hickory Creek was the last car on the final run of the 20th Century Limited to leave LaSalle in December 1967.

LaSalle was a terminal for the following lines and intercity trains: