The interior of Union Station, 1895.  Library of Congress 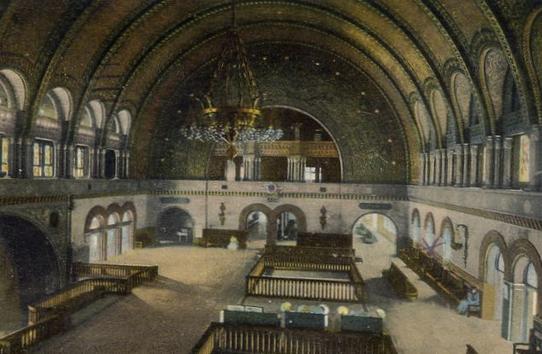 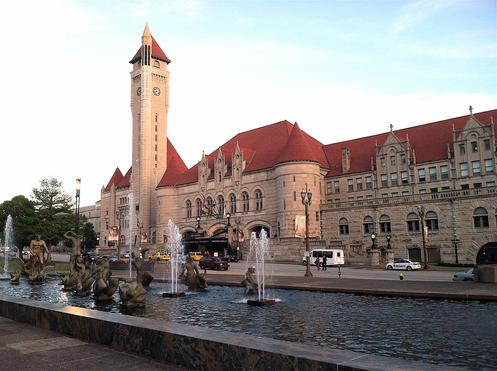 Diagram of original buildings and tracks at Union Station from 1916.

Outside the station is Carl Milles' fountain sculpture "Meeting Waters".

St. Louis Union Station
St. Louis Union Station, a National Historic Landmark, was a passenger intercity train terminal in St. Louis, Missouri. Once the world's largest and busiest train station, it was converted in the early 1980s into a hotel, shopping center, and entertainment complex. Today, an adjacent station serves light-rail passengers on MetroLink's Red and Blue Lines, while the city's intercity train station sits a quarter-mile to the east.

History
The station opened on September 1, 1894, and was owned by the Terminal Railroad Association of St. Louis. The station was designed by Theodore Link, and included three main areas: the Headhouse and the Midway, and the 11.5-acre (47,000 m2) Train Shed designed by civil engineer George H. Pegram. The headhouseoriginally housed a hotel, a restaurant, passenger waiting rooms and railroad ticketing offices. It featured a gold-leafed Grand Hall, Romanesque arches, a 65-foot (20 m) barrel-vaulted ceiling and stained-glass windows. The clock tower is 280 feet (85 m) high.

Union Station's headhouse and midway are constructed of Indiana limestone and initially included 42 tracks under its vast trainshed terminating in the stub-end terminal. Its Grand Hall, which cost around $6,500,000 and was about 75 by 125 feet large, was considered by many to be one of the most beautiful, public lobbies.

At its opening, it was the world's largest and busiest railroad station and its trainshed was the largest roof span in the world.

1900s
In 1903, Union Station was expanded to accommodate visitors to the 1904 St. Louis World's Fair. In the 1920s, it remained the largest American railroad terminal.

At its height, the station combined the St. Louis passenger services of 22 railroads, the most of any single terminal in the world. In the 1940s, it handled 100,000 passengers a day. The famous photograph of Harry S. Truman holding aloft the erroneous Chicago Tribune headline, "Dewey Defeats Truman", was shot at the station as Truman headed back to Washington, D.C., from Independence, Missouri, after the 1948 Presidential election.

The 1940s expansion added a new ticket counter designed as a half-circle and a mural by Louis Grell could be found atop the customer waiting area which depicted the history of St. Louis with an old fashion steam engine, two large steamboats and the Eads Bridge in the background.

As airliners became the preferred mode of long-distance travel and railroad passenger services declined in the 1950s and 1960s, the massive station became obsolete and too expensive to maintain for its original purpose. With the takeover of national rail passenger service by Amtrak in 1971, passenger train service to St. Louis was reduced to only three trains a day. Amtrak stopped using Union Station on October 31, 1978; the six daily trains did not justify such a large facility. The last train to leave Union Station was a Chicago-bound Inter-American. Passenger service shifted to an "Amshack" one block east, now the site of the Gateway Multimodal Transportation Center.

The station was designated a National Historic Landmark in 1970, as an important surviving example of large-scale railroad architecture from the late 19th century.

In August 1985, after a $150 million renovation designed by HOK, Union Station was reopened with a 539-room hotel, shopping mall, restaurants and food court. Federal historic rehabilitation tax credits were used to transform Union Station into one of the city's most visited attractions. The station rehabilitation by Conrad Schmitt Studios remains one of the largest adaptive re-use projects in the United States. The hotel is housed in the headhouse and part of the train shed, which also houses a lake and shopping, entertainment and dining establishments. Omni Hotels was the original hotel operator, followed by Hyatt Regency Hotel chain and Marriott Hotels.

2000s
In January 2010, St. Louis Union Station underwent another major redevelopment, with the expansion of the station's Marriott Hotel in the main terminal building. The hotel was to take over the Midway area of the station and all stores have been relocated to the train shed shopping arcade. These major improvements and redevelopments were to be finished by 2011, according to Marriott St. Louis Union Station.

Lodging Hospitality Management bought Union Station in 2012. It rebranded the hotel as a DoubleTree.

In August 2016, Lodging Hospitality Management announced new plans to renovate Union Station once again. The renovations will include a 75,000-square-foot, $45 million aquarium. The St. Louis Aquarium is to be completed by fall 2018; developers say it bring in an estimated one million annual visitors.

As of November 2017, no stores or restaurants remain inside the building.

The Memories Museum features artifacts and displays about the history of St. Louis Union Station and rail travel in the United States. Located on the upper level of the train shed, the museum is a joint project of Union Station Associates and the Museum of Transportation. Admission is free.

Some architectural elements from the building have been removed in renovations and taken to the Sauget, Illinois, storage site of the St. Louis Building Arts Foundation.

Union Station was the venue for the FIRST Tech Challenge World Championship component of the FIRST Championship, hosted in St. Louis every April until 2017, after which it was moved to Detroit.

It takes about 30 minutes to travel to Lambert-St. Louis International Airport's East and Main Terminals via the Metro Red Line.

Filming
In 1981, the disused Grand Hall was used in John Carpenter's movie Escape from New York, doubling for Madison Square Garden during the film's gladiatorial fight. 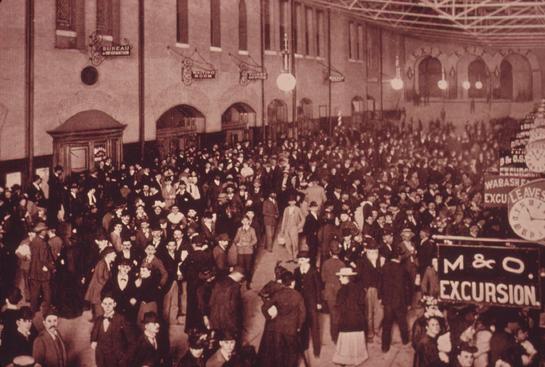 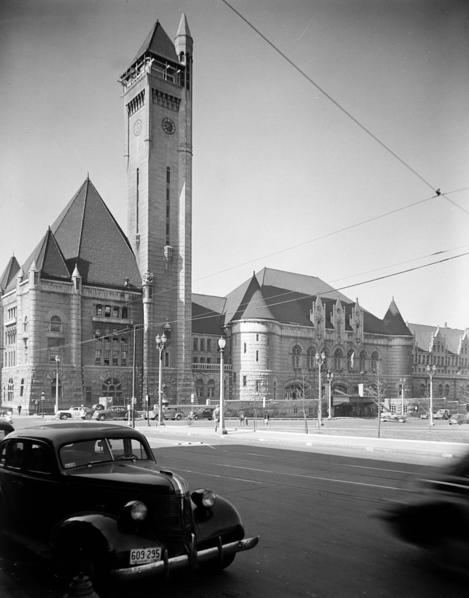 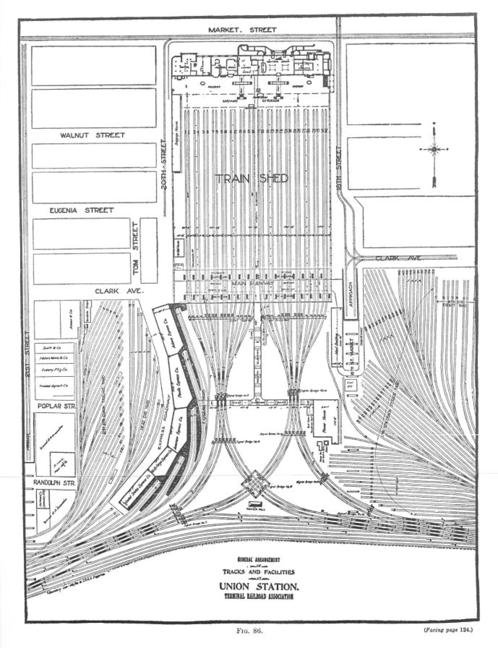 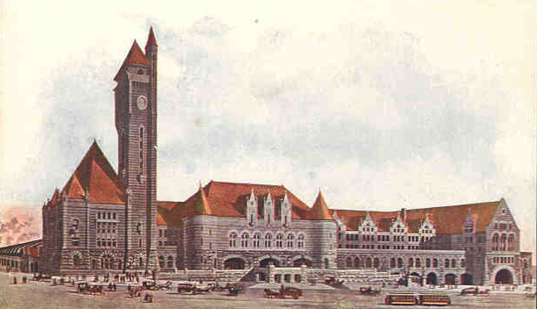