The Texas Zephyr at the platform at Texas and Pacific Station, August 16, 1962.  Photo by Everett L. DeGolyer Jr. 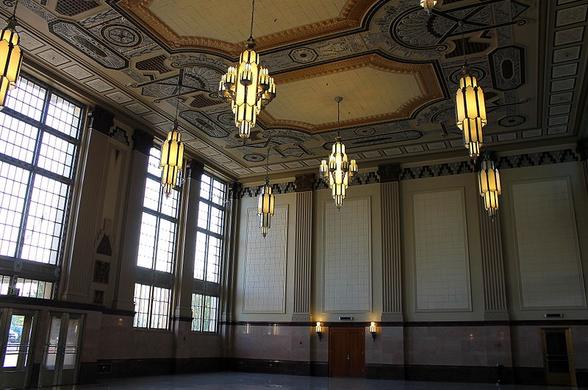 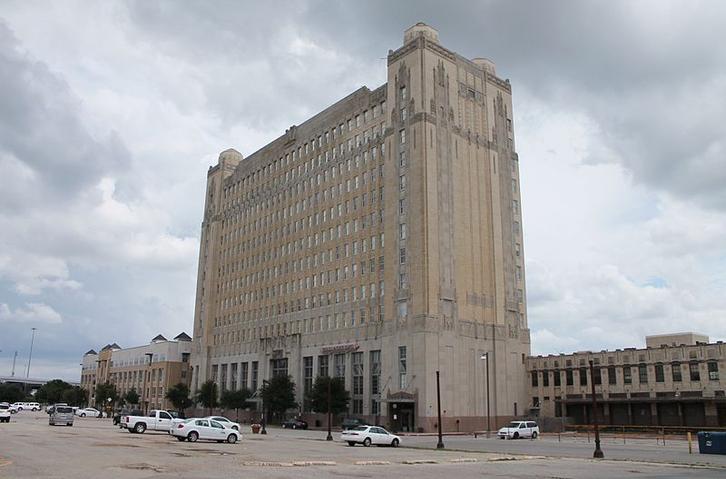 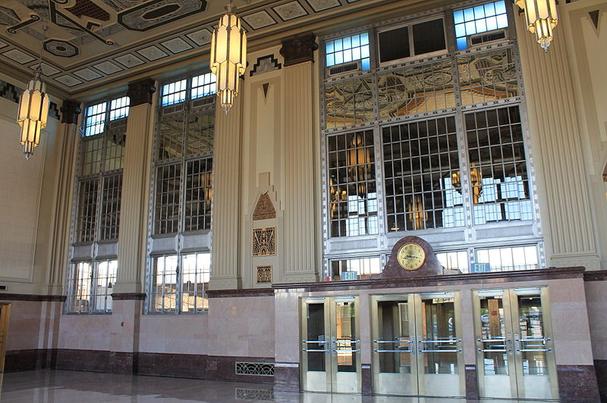 Texas and Pacific Station
Texas and Pacific Station, commonly known as T&P Station, is a terminal Trinity Railway Express railroad station and terminal TEXRail commuter railroad station located at 1600 Throckmorton Street in Fort Worth, Texas, on the south side of downtown. It is the western terminus of the TRE commuter line, serving the Fort Worth Convention Center, the Fort Worth Water Gardens, Sundance Square and Tarrant County government facilities. T&P Station features free parking (unlike the nearby Fort Worth ITC Station) which can be accessed from West Vickery Boulevard.

History
The current Texas & Pacific Station building was built by the Texas and Pacific Railway. It opened on October 25, 1931, as a replacement for an earlier station. It was designed in the Zigzag Moderne Art Deco style popular at the time. The opulent lobby features marble floors, metal-inlaid panel ceilings, and nickel and brass fixtures, incorporating the zigzags and chevrons distinctive of the style. The terminal facilities also included the larger Texas and Pacific Warehouse one block to the west, built in the same style as the station.

During the heyday of American passenger railroading, the station was also served by trains of the CB&Q (through subsidiary railroads Fort Worth and Denver Railway and the Colorado and Southern Railroad), Missouri Pacific, Katy, and Frisco Lines. Other railroads, such as the Santa Fe and Rock Island Lines, stopped at the nearby Gulf, Colorado and Santa Fe Railroad Passenger Station. The station declined along with the rest of the Lancaster Avenue area when the elevated portion of Interstate 30 was built in 1958, effectively separating the area from downtown. The railroad vacated the terminal in 1967 when passenger service in Fort Worth ended, dispatching offices remained on the third floor until November 1, 1981, and the Department of Housing and Urban Development became the exclusive tenant from the early 1980s until the late 1990s.

The passenger area of the station, which had not been occupied by HUD and was virtually untouched since 1967, was restored to its former beauty in 1999 at a cost of $1.4 million. Passenger service resumed at Texas & Pacific station on December 3, 2001 with the TRE's extension into Fort Worth.

Future plans
The demolition of the elevated highway in 2002 opened the Lancaster Avenue area for redevelopment. The upper floors of the T&P station have been renovated and are available for purchase as condominiums. The building's facade also underwent renovation and a new parking facility was built on the south side of the building. The historic diner on the ground floor was renovated and converted into a bar called the T&P Tavern. The T&P Warehouse building has not yet been renovated and is currently vacant; in July 2007, after nearly four years of negotiations, the city of Fort Worth contracted with Dallas developer Cleopatra Investments to begin residential development, slated for completion in 2012. However, economic conditions and construction-related issues have delayed the project.

The Texas and Pacific Terminal Complex, Fort Worth, Texas in May of 2015. 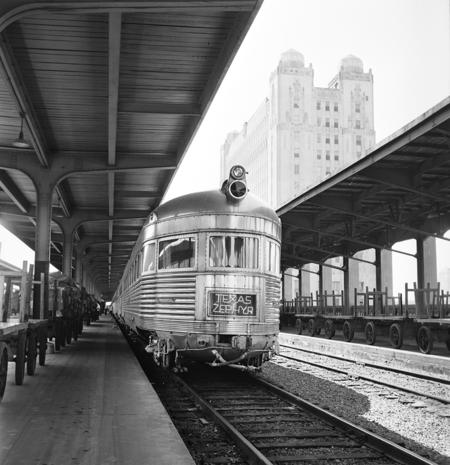 Interior view of the station entrance.

Interior view of the Texas and Pacific Station. The complex was designed by architect Wyatt C. Hedrick and completed in 1931.