Description
The terminal is part of Liberty State Park, and along with nearby Ellis Island and Statue of Liberty recalls the era of massive immigration through the Port of New York and New Jersey. It is estimated that around 10.5 million entered the country through the station. The area has long been known as Communipaw, which in the Algonquian language Lenape means big landing place at the side of a river. The first stop west of the station was indeed called Communipaw, and was not far from the village that had been established there in 1634 as part of the New Netherland settlement of Pavonia. The land on which the extensive yards were built was reclaimed, or filled. The terminal itself is next to the Morris Canal Big Basin, which to some degree was made obsolete by the railroads which replaced it. The long cobbled road which ends at the terminal (once called Johnston Avenue for a president of CNJ) is Audrey Zapp Drive, for the environmentalist active in the creation of the park.

The main building is designed in a Richardsonian Romanesque style. The intermodal facility contains more than a dozen platforms and several ferry slips. Arriving passengers would walk to the railhead concourse and could either pass through its main waiting room, by-pass it on either side, and take stairs to the upper level. The ferry slips have also been restored though the structure which housed them has been removed, as have the tracks. The Bush-type trainsheds, the largest ever to be constructed and designed by A. Lincoln Bush, were not part of the original construction, but were built in 1914 and have not been restored.

Service
Trackage
The terminal, along with its docks and yards, was one of several massive terminal complexes (the other being the terminals of the Pennsylvania Railroad in Exchange Place, the Erie Railroad Terminal in Pavonia, the Lackawanna Railroad Terminal in Hoboken, and the West Shore Railroad Terminal in Weehawken) that dominated the western waterfront of the New York Harbor from the mid 19th to the mid 20th century. Of the two still standing, the Hoboken Terminal (the former Lackwanna Railroad Terminal) is the only one still in use. Lines from the station headed to the southwest. Arriving at the waterfront from the points required overcoming significant natural obstacles including crossing the Hackensack River and Meadows and Hudson Palisades, and in the case of New Jersey Central, traversing the Newark Bay. For its mainline, the railroad constructed the Newark Bay Bridge to Elizabeth. Its Newark branch cut through Bergen Hill and crossed two bridges at Kearny Point. Both rights-of-way in Hudson County are now used by the Hudson Bergen Light Rail, one terminating at West Side Avenue and the other at 8th Street Station in Bayonne.

Ferries and ships
The Communipaw ferry constituted the main ferry route from the terminal and was operated by four ferries that crossed the North River to Liberty Street Ferry Terminal in lower Manhattan. Additional service to 23rd Street was also operated until the CRNJ went bankrupt in 1945 and scrapped its ferry boats used on the 23rd street route in 1947. In the early 1900s the B&O Railroad requested the CRNJ operate ferries for its luxury Royal Blue service passengers to Whitehall Terminal and this was accomplished for several years until the City of New York purchased the Staten Island Ferry from the B&O's subsidiary, the Staten Island Railway, and ended the service in 1905. Until the opening of the Verrazano Narrows Bridge there was also service to Brooklyn and Staten Island Other boats, among them the SS Asbury Park and SS Sandy Hook, which traveled to the Raritan Bayshore.

In 1941, the CRRNJ ferryboat fleet made 374 one-way crossings of the North River (Hudson River) each day.

Railroad lines
The famed Royal Limited in 1898. This train provided luxury service between Jersey City Terminal and Washington, DC and made the journey in under 5 hours.

The Reading Company used the terminal for its Crusader and Wall Street trains. The Baltimore and Ohio Railroad (B&O), whose Royal Blue was a premier passenger train to Washington, DC, also had trains to Chicago and St. Louis.

In April 1967 the opening of the Aldene Connection led to the end of passenger service to the station and the diverting of all remaining passenger trains to Penn Station in Newark.

The timetable for 27 September 1936 shows 132 weekday departures, including 25 to CNJ's Broad St. Newark station, 25 that ran south from Elizabethport (two to Chrome and the rest to the NY&LB) and 19 Reading and B&O trains that turned southwest at Bound Brook Junction. Three trains ran to Mauch Chunk and two to Harrisburg via Allentown; the other 58 trains terminated along the main line between West 8th St in Bayonne and Hampton.

Named Passenger Trains
Until April 1958 several long-distance trains originated at the station, and trains to Philadelphia lasted until 1967.

* With the closing of Baltimore & Ohio passenger service north of Baltimore in 1958 the Royal Blue was abandoned and the Capitol Limited, Metropolitan Special and National Limited were terminated east of Baltimore.

Post-railroad service uses
Following the closure of CNJ shops and engine facilities nearby in the early 1970s, the terminal sat abandoned. Ferries to the Statue of Liberty National Monument, Ellis Island, and Liberty Island depart daily. Following the Aldene Plan the terminal sat unused but maintained and guarded by the Central Railroad of New Jersey and during this time a portion of the movie Funny Girl was filmed at the terminal.

Numerous fairs, concerts, and other sponsored events (among them the Central Jersey Heritage Festival and the All Points West Music & Arts Festival) take place at the station and its grounds, which is a very popular place from which to view July 4 fireworks. On September 11, 2001 its parking lot was the staging area for dozens of ambulances that were mobilized to transport victims of the attack. There is no shuttlebus from the terminal to the Hudson Bergen Light Rail's Liberty State Park Station. In 2009 Rutgers University students proposed building a trolley line to the terminal building and other points in the park from the light rail station to improve access. The terminal was badly damaged by flooding during Hurricane Sandy in 2012 and was reopened in 2016.

A reproduction of a tablet track designator for the CNJ Blue Comet. 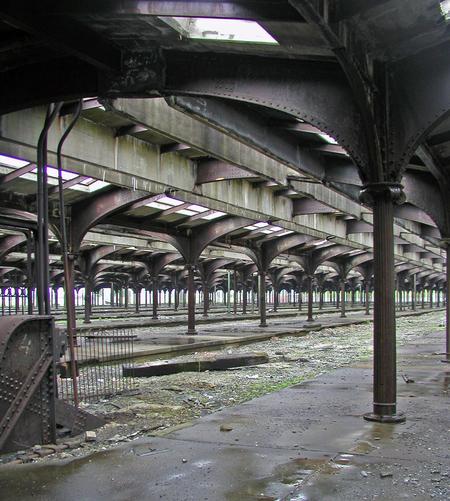 Inside the Communipaw Terminal. 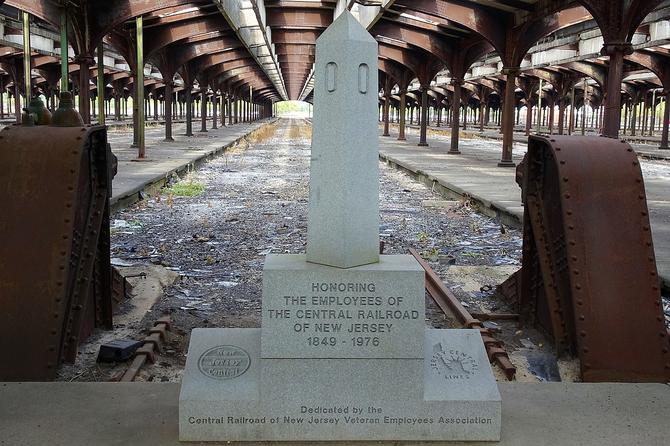 Memorial honoring the employees of the Central Railroad of New Jersey at milepost 0. 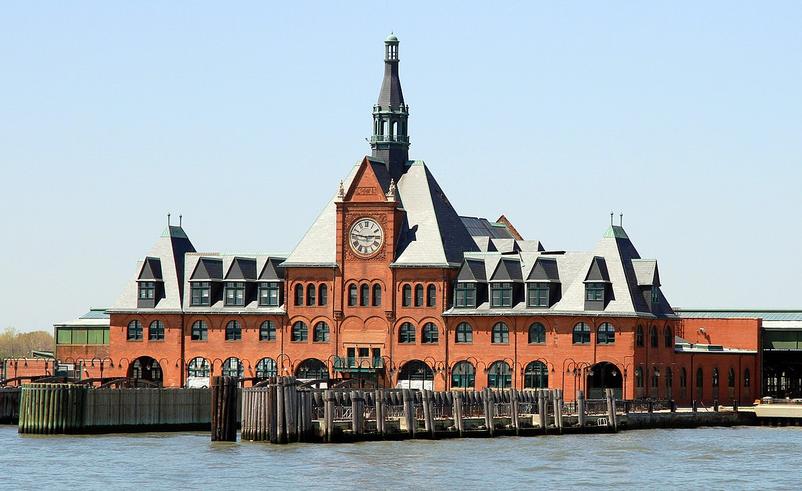 Bush shed at CRRNJ Terminal, the largest ever built. 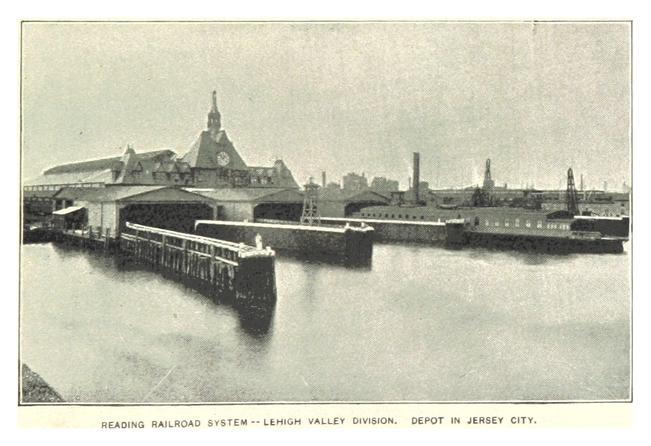 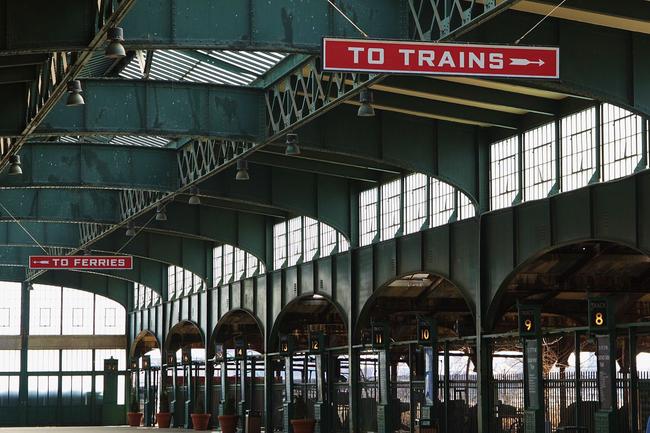 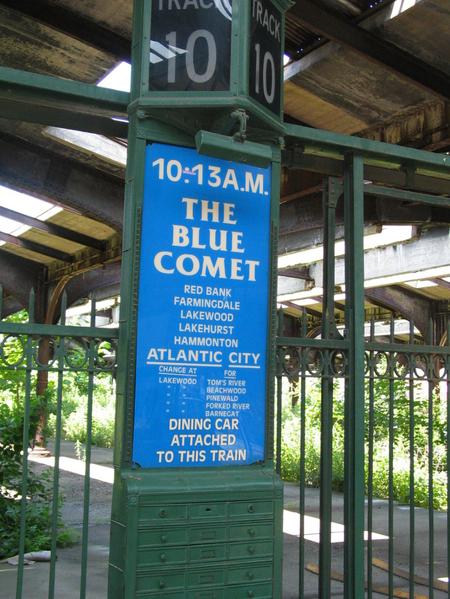