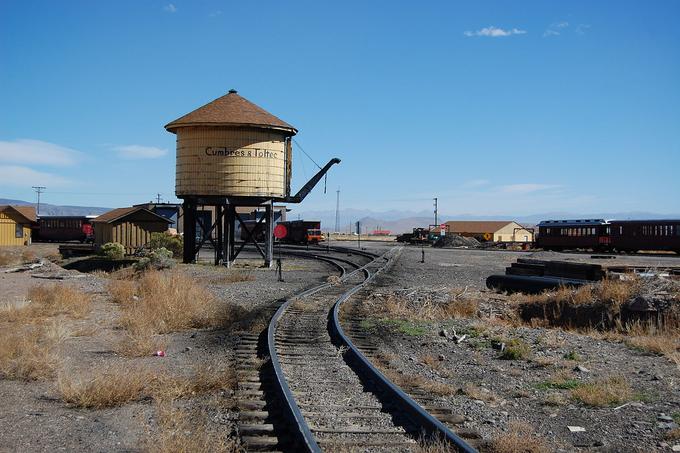 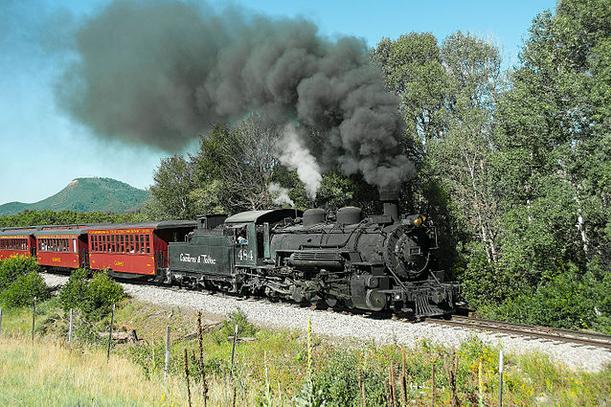 Toltec Gorge, New Mexico and Colorado. This is from "Rocky Mountain Views", a promotional book with 24 color plates made "For Sale Only en Route on The Denver & Rio Grande Western Railroad", ca. 1917. 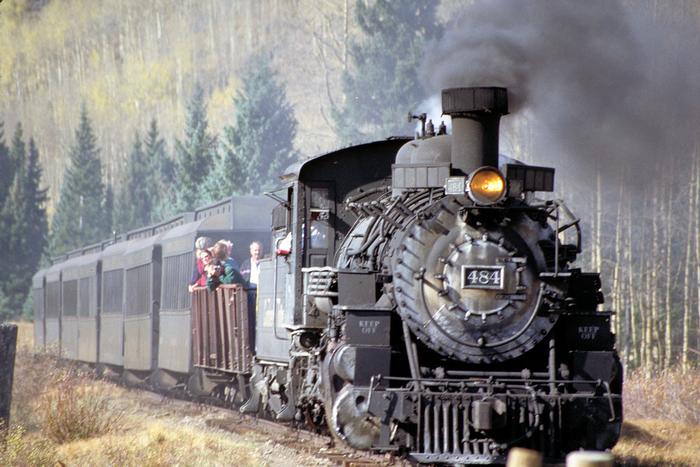 Cumbres and Toltec Scenic Railroad
The Cumbres and Toltec Scenic Railroad (C&TS) is a 3 ft (914 mm) narrow gauge heritage railroad running between Chama, New Mexico and Antonito, Colorado. The line runs for 64 miles (103 km )over 10,015 ft (3,053 m) Cumbres Pass and through Toltec Gorge, from which it takes its name. Trains operate from both endpoints and meet at the midpoint. The train traverses the border between Colorado and New Mexico, crossing back and forth between the two states 11 times. The line was originally a portion of the San Juan Line of the Denver and Rio Grande Western Railway, jointly owned by the Colorado and New Mexico since 1970. The Cumbres and Toltec Scenic Railroad received the Designation of a National Historic Landmark in 2012 by the United States National Park Service.

History
Construction
The railroad line was constructed in 1880-1881 by the Denver and Rio Grande Western Railroad (D&RG) as part of their San Juan Line stretching from Alamosa, Colorado to Durango, Colorado. The line was constructed with 3 ft (914 mm) narrow gauge track, matching several other lines in the D&RG system. The line primarily supported mining operations in the San Juan Mountains, mainly around Durango and Silverton. The portion of this line today known as the Cumbres and Toltec Scenic Railroad, is 64 miles (103 km) long and was built in less than nine months.

Today's Durango and Silverton Narrow Gauge Railroad was built in 1882 as a branch line off the San Juan main. By the late 1950s mining had dwindled substantially and the line was on the verge of abandonment, but an oil boom near Farmington, New Mexico created a traffic surge that kept the line operating for another decade hauling oil and pipe. By the late 1960s the traffic was virtually gone and the railroad applied for abandonment. The states of Colorado and New Mexico purchased the portion of the San Juan Extension between Antonito, Colorado and Chama, New Mexico in 1970 and started operating the next year under the name of the Cumbres and Toltec Scenic Railroad. The Cumbres and Toltec Scenic Railroad Commission was created by an act of Congress as a bi-state entity to oversee the railroad.

Current operations
The Cumbres and Toltec Scenic Railroad continues to operate daily between May and October of each year with restored steam locomotives. Trains depart each morning from both Chama, New Mexico and Antonito, Colorado. In peak season there are trains every day of the week in either direction. They meet at Osier, the midpoint of the line. Passengers may continue on their train to the other end or switch trains to return to their original terminal. Through riders have the option of a motor coach return to their original terminal.

Locomotives
All the steam locomotives at the C&TS were built for and operated their entire careers for the Denver and Rio Grande Western. All 2-8-2 Mikados, these range from the relatively small K-27 "Mudhen", No. 463, once owned by Gene Autry, to the large K-37s, originally built as standard gauge locomotives. The mainstays are the venerable D&RGW K-36 fleet, produced by Baldwin Locomotive Works in 1925. The only two Surviving D&RGW rotary snowplows are onsite and both have operated for the C&TS.

The C&TSRR D&RGW 168 locomotive, a 4-6-0, was moved from Colorado Springs, Colorado to Antonito, Colorado with the intent of use for service once restored. The No. 168 was built in 1883 and is only one of two remaining of the original twelve locomotives built between 1883 and 1885 for the D&RG line. The other locomotive,  No. 169, is on static display in Alamosa, Colorado, and is not operational.

Incidents
2002 FRA shutdown
In spring 2002 the Federal Railroad Administration ordered the shutdown of the railroad until specific track bed issues were resolved.

2002 forest fire shutdown
The railroad was closed for much of the summer of 2002 by the US Forest Service due to extremely dry conditions, forest fires across the region, and fears that the steam locomotives would cause fires.

2010 trestle fire
On June 23, 2010, a brush fire severely damaged the Lobato Trestle, a long and high deck girder bridge. The railway trucked locomotive 484 and some coaches from Chama to Cumbres so that operations could continue on both sides of the break. On June 20, 2011, the Lobato Trestle was returned to service, and trains were once more traveling the full length of the railroad.

Operator changes
In 2012 the Cumbres and Toltec signed a contract with American Heritage Railways to operate the railway; AHR also owns the Durango and Silverton Narrow Gauge Railroad and the Great Smoky Mountains Railroad, and used to be operator of the Texas State Railroad. AHR gave notice at the end of the 2012 season that it would withdraw as operator. The C&TS formed a special sub-entity, Cumbres & Toltec Operating LLC, to operate the railway after AHR pulled out. John Bush was hired as president of C&TS in December 2012.

Legacy
The Cumbres and Toltec is highly regarded by both railfans and historians due to its relative authenticity and surviving historic fabric. Chama houses one of the most physically complete railroad yards from the steam era in the US. Although portions of the roundhouse, warehouses, and parking lots have been changed, the railroad yard has the ambiance of pre-1960 railroad operations. The yard tracks contain authentic rolling stock and structures of the Denver and Rio Grande indigenous to the railroad line.

As the Denver & Rio Grande Railroad San Juan Extension, the railway was listed on the National Register of Historic Places in 1973. The boundaries of the NRHP listed area were increased in 2007.

The railroad was featured extensively in the 1969 film The Good Guys and the Bad Guys, and was used in the opening sequence of Indiana Jones and the Last Crusade. The 2014 film A Million Ways to Die in the West also featured this railroad.

Chama to Osier
Beginning in Chama (Milepost 344.12), the railroad proceeds northeast after leaving the yard and crossing the Rio Chama. About a mile later begins a 4% grade which is nearly constant from there to Cumbres. The first siding on the line is located at Lobato (MP: 339.99), located here are the remnants of a stock pen, and a water tank made for a movie in the 1970s. The tank was used later in Indiana Jones and the Last Crusade. The water tank was knocked over in 2006, due to age and high winds. Just under a quarter of a mile away, is Lobato Trestle, the second highest trestle on the line, built in 1883. Due to weight restrictions, only one locomotive at a time is allowed to cross; therefore, all double-headers must separate, and rejoin on the other side.

From here to Cumbres, the railroad operates on the north side of Wolf Creek. On the journey to the top at Cumbres, the train passes Cresco Siding and water tank (MP 335.10) and navigates a small canyon past Hamilton's Point. Exiting the canyon, the track makes a turn to the northwest and up the Wolf Creek drainage through Coxo. At a narrow point of the valley, the track makes a horseshoe turn up to Windy Point, which the train rounds to enter Cumbres Pass.

At Cumbres (MP 330.48), elevation 10,015 ft (3,053 m), is the Car Inspector's House, Water Standpipe, remnants of the extensive snow shed, and the Section House, which replaced the original depot after it was demolished in the 1950s. Cumbres is the highest point on the railroad. From here east, the track heads down at 2.5%, and descends the Cumbres Loop, more commonly refer to as "Tanglefoot Curve". After exiting the loop, the track follows a general easterly direction until Milepost 327.6, where they turn north up the Los Pinos Valley.

Heading north, the track loses elevation, while the valley slopes up, with the track and valley floor finally meeting at Mile 325, where the track once again changes direction, heading south on the other side of the valley, following the Rio de Los Pinos toward Osier. After Mile 323, the track again leaves the valley, on a much steeper grade, while the track clings to the valley created by the river. Along the way, the track crosses Cascade Trestle (MP 319.95), taller than the Lobato Trestle, at 137 ft (42 m). Approximately a mile and a half later, the track enters Osier, Colorado, the midpoint of the railroad where the two trains meet for lunch. Here, riders may switch trains and return to their point of origin, or ride to the opposing terminus.

Antonito (MP 280.70) is a small company town of the former railroad main line. It is home to the C&TS car shop, a water tank, and other relics. Most of the facilities were built by the Cumbres & Toltec, as the original rail yard, wye, and station were not sold to the states of Colorado and New Mexico.

Shortly after leaving the station, the train heads straight for 3 miles (4.8 km), until coming into some hills. Shortly thereafter, the train crosses Ferguson's Trestle (MP 285.87), named for a man who was hung from a locomotive there. The original trestle was featured in the 1988 TV movie Where The Hell's That Gold? starring Willie Nelson and Delta Burke. In filming, a planned explosion ended up getting out of hand and the bridge was burned down. Traffic was halted for a week while the C&TS built a temporary bridge; the following winter it rebuilt the trestle to match the original. About three miles (5 km) later, the train makes the first of 11 crossings into New Mexico, and climbs a ledge up to a lava mesa. Lava (291.55) has the old water tank from Antonito which was moved here in 1971. The track goes around a horseshoe curve which is also used as a reversing loop to turn the rotary snow plow trains from Chama. The Cumbres and Toltec has two rotary snowplows, Rotary OM and Rotary OY.

Sublette is an abandoned railroad section camp, consisting of a log bunk house, a section house, a siding, and other buildings. There used to be a water tank at the western end of the siding, but today, in its place, is a standpipe. After filling the tender with water, the engine and the train slowly creep into lush aspen groves.

After departing Sublette comes Toltec Siding, which in the 50's was the meeting place of long oil well pipe trains moving between Chama and Farmington to Alamosa. Shortly afterwords, trains pass through Mud Tunnel, which is unique because it is lined with wooden pillars since it is bored through soft volcanic ash. When the beams in the tunnel collapsed, the D&RGW made a "shoo fly"[clarification needed] around the tunnel to allow passengers and small cars to be moved around the tunnel to an awaiting train. After passing through this, trains pass around Phantom Curve and through Calico Cut, and then the trains slow down as they enter the longer Rock Tunnel. Trains exit the tunnel, entering the Toltec Gorge, where the track is 600 ft (180 m) above the river. The line follows the river the remainder of the distance to Osier.

The water tower in Antonito, October 2012. By Milan Suvajac. 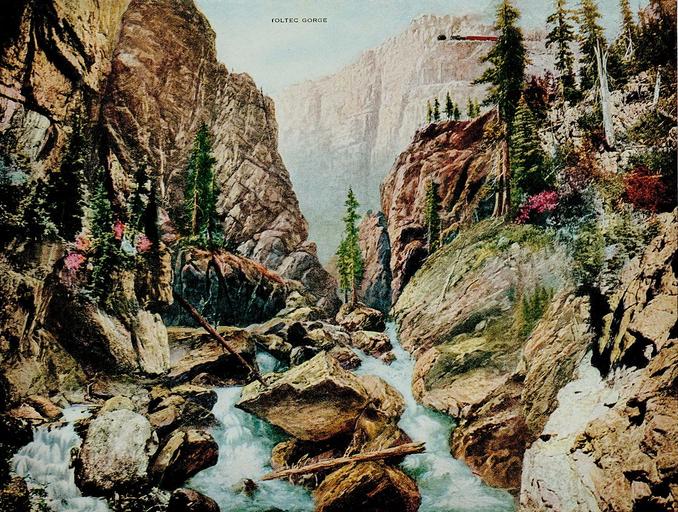 Steam locomotive No. 484 of the Cumbres and Toltec Scenic Railroad, Colorado.   Photo by Dennis Adams.

Cumbres and Toltec Scenic Railroad Passengers enjoy the scenery as they travel on the Cumbres Toltec historic railroad that travels between Chama, New Mexico and Antonito, Colorado.    Photo by Sally Pearce.