Detail of track and set pulleys on quarry incline. April, 1934. Library of Congress. 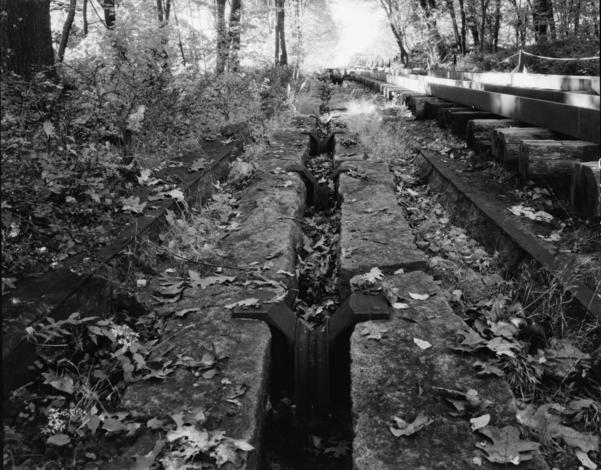 History
In 1825, after an exhaustive search throughout New England, Solomon Willard selected the Quincy site as the source of stone for the Bunker Hill Monument. After many delays and much obstruction, the railway itself was granted a charter on March 4, 1826, with right of eminent domain to establish its right-of-way. Businessman and state legislator Thomas Handasyd Perkins organized the financing of the new Granite Railway Company, owning a majority of its shares, and he was designated its president. The railroad was designed and built by railway pioneer Gridley Bryant and began operations on October 7, 1826. Bryant used developments that had already been in use on the railroads in England, but he modified his design to allow for heavier, more concentrated loads and a three-foot frost line.

The railway ran three miles (4.8 km) from quarries to the Neponset River. Its wagons had wheels 6 ft (1.83 m) in diameter and were pulled by horses, although steam locomotives had been in operation in England for two decades. The wooden rails were plated with iron and were laid 5 ft (1,524 mm) apart, on stone crossties spaced at 8-foot intervals. By 1837 these wooden rails had been replaced by granite rails, once again capped with iron.

In 1830, a new section of the railway called the Incline was added to haul granite from the Pine Ledge Quarry to the railway level 84 ft (26 m) below. Wagons moved up and down the 315-foot (96 m) long incline in an endless conveyor belt. The incline continued in operation until the 1940s.

The railway introduced several important inventions, including railway switches or frogs, the turntable, and double-truck railroad cars. Gridley Bryant never patented his inventions, believing they should be for the benefit of all.

The novelty of the new railroad attracted tourists who journeyed out from Boston to witness the revolutionary technology in person. Notable visitors such as statesman Daniel Webster and English actress Fanny Kemble were early witnesses to the new railway. Miss Kemble described her 1833 visit in her journal.

The Granite Railway was the site of one of the first fatal railway accidents in the United States, on July 25, 1832, when the wagon containing Thomas B. Achuas, of Cuba, derailed as he and three other tourists were taking a tour. The accident occurred while the wagon—empty of stone but now carrying the four passengers—was ascending the Incline on its return trip and a cable broke. The occupants of the car were thrown over a cliff, approximately 35 ft (11 m). Mr. Achuas was killed and the three other passengers were badly injured.

In 1871 the Old Colony and Newport Railway took over the original right-of-way of the Granite Railway, replacing its track with contemporary construction, and steam trains then took granite from the quarries directly to Boston without need of barges from the Neponset River. This portion of the Old Colony Railroad through Quincy and Milton was later absorbed into the New York, New Haven and Hartford Railroad and later closed.

During the early twentieth century, metal channels were laid over the old granite rails on the Incline and motor trucks were hauled up and down on a cable.

Most of the right of way of the railway was eventually incorporated into much of the Southeast Expressway in Milton and Quincy.

Preservation
The railway's Incline was added to the National Register of Historic Places on June 19, 1973, and a surviving portion of the railroad bed, just off the end of Bunker Hill Lane, was added on October 15, 1973.

A centennial historic plaque from 1926, an original switch frog, a piece of train track, and a section of superstructure from the Granite Railway are in the gardens on top of the Southeast Expressway (Interstate 93) as it passes under East Milton Square. The frog had been displayed at the World's Columbian Exposition at Chicago in 1893. The commemorative display is at the approximate site of the railroad's right-of-way as it went through Milton on its way to the Neponset River.

In Quincy, visitors can walk along several parkland trails that reveal vestiges of the original railway trestle and the Incline. These trails connect to the quarries, most of which are now filled for safety purposes with dirt from the massive Big Dig highway project in Boston. In years past, many persons were injured — and some killed — while diving into the abandoned quarries from great heights.

The Department of Conservation and Recreation maintains the Quincy Quarries Reservation, which has facilities for rock climbing, and trails connecting the remains of the Granite Railway. 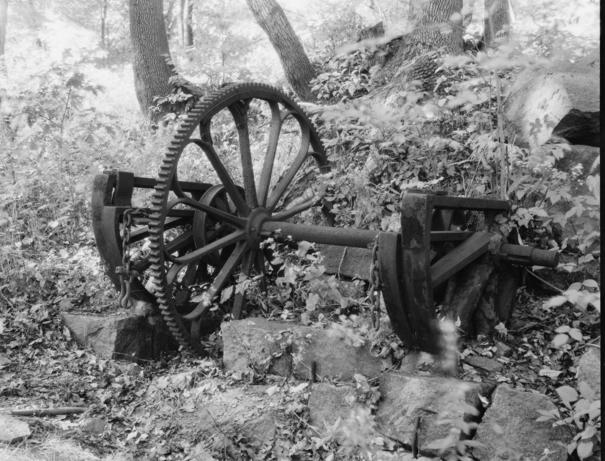 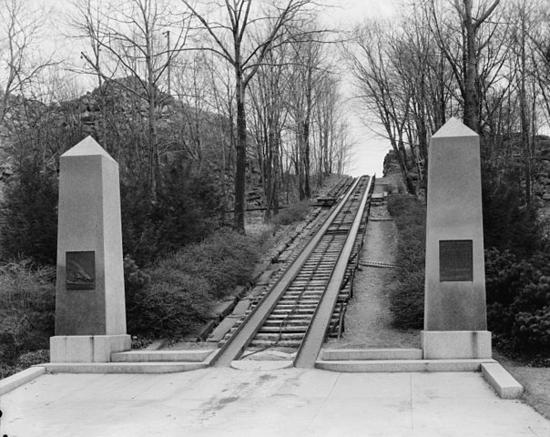 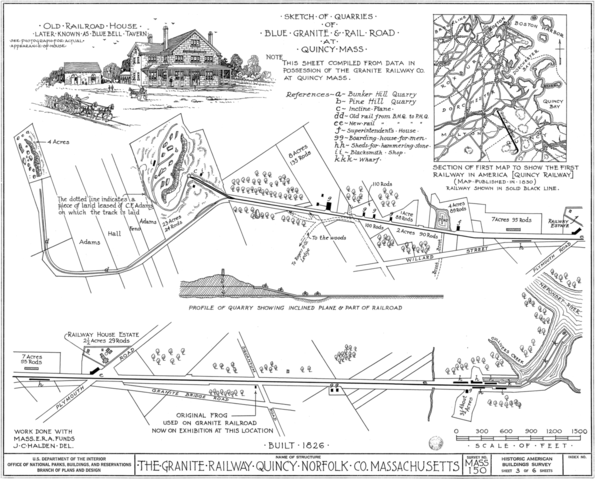