Aerial view of the Lucin Cutoff trestle before removal. The 1950s causeway can be seen to the right of the trestle.

A late-1950s Morrison Knudsen Corporation film documenting the construction of the earthen causeway across the Great Salt Lake for the Southern Pacific Railroad, supplementing a wooden trestle that was originally built in 1903-1904. 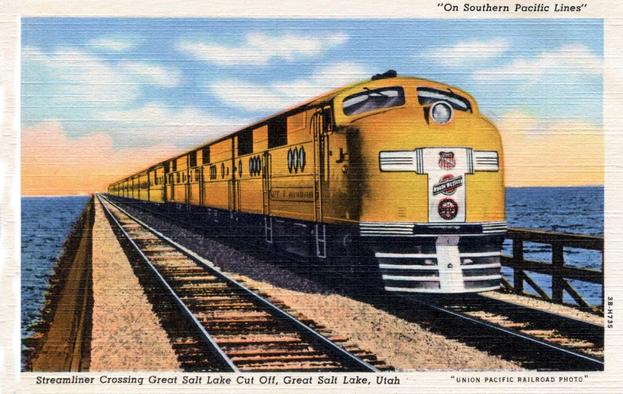 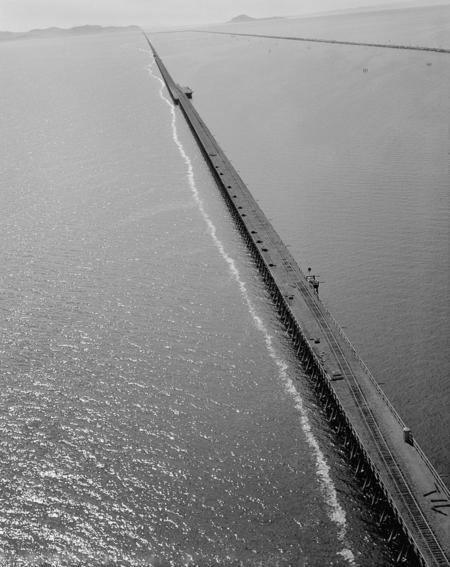 A map of the railroad causeway crossing the Great Salt Lake. The map shows past and present causeway parts, along with some geographical highlights of the area.

Lucin Cutoff
The Lucin Cutoff is a 102-mile (164 km) railroad line in Utah which runs from Ogden to its namesake in Lucin. The most prominent feature of the cutoff was a 12-mile (19 km) long railroad trestle crossing the Great Salt Lake, in use from 1904 until the late 1950s, and since replaced by a rock and dirt causeway.

History
Original construction
Built by the Southern Pacific Company (SP) between February 1902 and March 1904, the cutoff bypassed the original Central Pacific Railroad route through Promontory Summit where the Golden spike was driven in 1869. By going west across the lake from Ogden to Lucin, it cut 44 miles (71 km) off the original route and also significantly decreased curvature and grades. Built under the direction of SP chief engineer William Hood, a team of 3,000 SP workers worked seven days a week to build the line.

When the line opened, it included short causeways extending from the western shore of the lake and the edge of  Promontory Point, connected with a nearly 12-mile (19 km) long wooden trestle. The cutoff also included a causeway which spanned Bear River Bay from the eastern shore of the lake to Promontory Point. This section included a 600-foot-long trestle to allow Bear River water to flow into the lake.

By 1908, five passenger trains and seven freight trains were using the Lucin Cutoff in each direction daily. In 1942, the original line was removed between Lucin and Corinne, Utah — with the last Promontory spikes pulled up and the scrap metal donated to the war effort.

In 1944 the cutoff was the site of a train wreck in which 48 people were killed.

Trestle replacement
The trestle was functionally replaced in the late 1950s with a parallel dirt and rock causeway built under contract by the  Morrison Knudsen construction company. The trestle remained in limited use alongside the causeway, until about 1975. The railroad eventually sold salvage rights to the trestle and Cannon Structures, Inc., through its Trestlewood division, began to dismantle it in the early 1990s. Trestlewood continues to market and sell the salvaged trestle wood.

Openings in the causeway
The causeway would prevent lake water from flowing as freely as the open trestle had, and to help mitigate effects two culverts were included in the original causeway construction. The culverts would allow for boat traffic, and a limited amount of water to flow from the lake's southern arm (where surrounding freshwater rivers emptied into the lake) into the lake's northern arm.

In the early 1980s Utah experienced heavy flooding, and much of the extra water along the Wasatch Front flowed into the Great Salt Lake. This resulted in the lake experiencing historic high water levels and flooding nearby landowners. To aid the two culverts in channeling water to the northern arm, the State of Utah constructed a 300-foot-long bridge at the western end of the causeway. The state breached the causeway under the new bridge on August 1, 1984, allowing pent-up water from the southern arm to flow into the northern arm.

The continual slow sinking of the causeway has on occasion required more material to raise its height above the lake level. During the flooding of the 1980s, this buildup included placing 1,430 surplus railcars along the northern edge of the causeway and filling them with rock to act as gabions. A gabion is a cage, cylinder, or box filled with rocks, concrete, or sometimes sand and soil for use in civil engineering, road building, military applications and landscaping. This feature is known as the "Boxcar Seawall."

In March 2011, Union Pacific Railroad (UP), the successor the Southern Pacific, requested permission to close the two 1950s culverts because of damage related to age and a sinking of the causeway into the lake bed. The two culverts were closed in 2012 and 2013. To mitigate the effects of closing the two culverts, the railroad was required to build a bridge and breach the causeway under that bridge. Construction of a 180-foot-long bridge was completed in fall 2016, although the railroad agreed to delay opening the breach for a few months, due to environmental and water level concerns. The causeway was breached beneath the 180-foot bridge on December 1, 2016. Since the opening of the causeway the level of the water in the arms of the lake have begun to equalize. As of April 30, 2017 the level of the lake in the northern arm is within a foot of the southern arm.