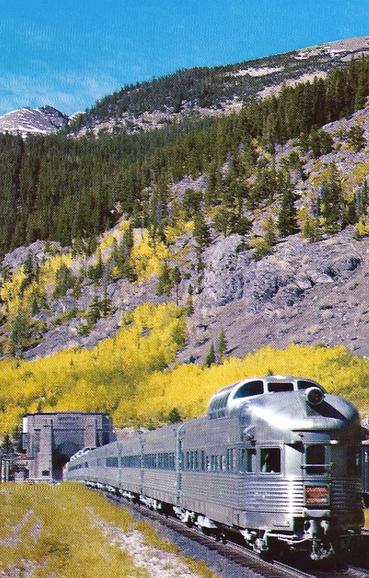 The Moffat Tunnel
The Moffat Tunnel is a railroad and water tunnel that cuts through the Continental Divide in north-central Colorado. Named after Colorado railroad pioneer David Moffat, the tunnel's first railroad traffic passed through in February 1928.

The Moffat Tunnel finally provided Denver with a western link through the continental divide, as both Cheyenne, Wyoming to the north and Pueblo, Colorado to the south already enjoyed rail access to the West Coast. It follows the right-of-way laid out by Moffat in 1902 while he was seeking a better and shorter route from Denver to Salt Lake City. The water tunnel and the railroad tunnel parallel each other; the water tunnel delivers a portion of Denver's water supply.

History
The tunnel was the brainchild of David Moffat of the Denver, Northwestern and Pacific (DNW&P) railroad as early as 1902. The original DNW&P tracks climbed Rollins Pass with a series of switch back loops with a steep 4% grade and severe snow conditions. Snow removal on the original line made it unprofitable to operate.

Moffat was unable to raise sufficient funds to build the tunnel before he died in 1911, but the forces behind the tunnel continued, and in 1914 a Denver bond issue was approved financing two thirds of the construction cost of the tunnel. The issue was defeated in a court decision which ruled that Denver did not have the constitutional right to enter into a joint venture to construct the tunnel with a private corporation.

In 1920 a bill was introduced in the state legislature to build three tunnels under Monarch Pass, Cumbres Pass, and Rollins Pass (the Moffat Route). The various regions of the state could not come to agreement, partly because southern and southwestern regions feared that Denver would gain a new advantage in commerce from the Moffat Route. Blocking this legislation would ultimately backfire, when Denver was finally able to secure financing for its tunnel.

In early 1922 Denver's lawmakers in the state legislature found an opening. Pueblo had been devastated by a flood, and Gov. Oliver Henry Shoup called an emergency session of the legislature. Denver lawmakers now had power over Pueblo. They would vote for emergency funding for the beleaguered town (an economic rival to Denver) in return for legislation authorizing the issuance of bonds for Denver's tunnel. A deal was struck, and on April 29, the Moffat Tunnel Improvement District was created.

The district boundaries included the City and County of Denver, and all or portions of the counties traversed by the Denver and Salt Lake Railway. The district had the authority to levy taxes and issue bonds backed by real estate within the district. The following summer, bonds were sold and construction began.

The bonds were fully paid off in December 1983, but the commission continued to exist until 1998. It was finally disbanded after a series of political intrigues related to the Winter Park Resort, which was built partly on land owned by the commission (known as the Evans Tract).

In 1988, Rio Grande Industries, the company that controlled the Denver and Rio Grande Western Railroad, purchased the Southern Pacific Railroad. The combined company took the Southern Pacific name because of its name recognition among shippers. On September 11, 1996, owner Philip Anschutz sold the combined company to the Union Pacific Railroad in response to the earlier merger of the Burlington Northern and the Santa Fe which formed the Burlington Northern and Santa Fe Railway. The Union Pacific Railroad still uses Moffat Tunnel today. Although its primary purpose today is as a rail route for coal and freight and as a water tunnel from the Pacific watershed to the Denver area, tourists and cross-country passengers can enjoy the route on Amtrak's California Zephyr.

Construction
The Moffat Tunnel was cut under a shoulder of James Peak. A small pioneer tunnel was bored parallel with and 75 feet (23 m) south of the main tunnel to facilitate the work and was eight feet high and eight feet wide. In 1925 bad rock at the west end of the tunnel delayed construction and costs soared. The pioneer tunnel was officially "holed through" on February 18, 1927, the blast of dynamite being set off by President Calvin Coolidge's pressing a key in Washington, D.C., and the program was broadcast by radio from the heart of the mountain. The pilot bore later became the water tunnel. Three more bond issues were sold before the tunnel was completed.

The railroad tunnel was holed through on July 7, 1927, and formally turned over to the lessee on February 26, 1928. Upon completion of the Dotsero Cutoff five years later, railroad connections through the tunnel shortened the distance between Denver and the Pacific coast by 176 miles (283 km). The tunnel took 48 months to bore, average daily progress being 21 feet (6.4 m). The first train passed through the tunnel in February 1928.

Water tunnel
The pilot bore was leased to the City of Denver for use as a water tunnel to divert water east from the Colorado River Basin under the continental divide to the urban areas of the eastern slope. The pilot bore was enlarged to a diameter of 10.5 feet (3.2m), giving it a carrying capacity of 1,280 cubic feet per second (36m3/s), and water diversion began in 1936. In 1979 the water tunnel was sold by the Moffat Tunnel Improvement District to the City. Since the 1940s, the tunnel has also conveyed water for the city of Englewood, Colorado. 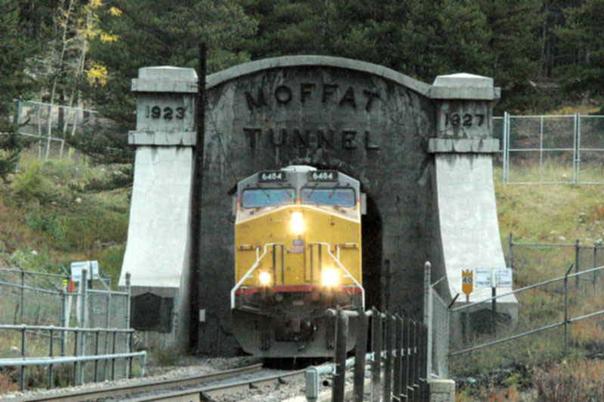 The interior of the newly completed Moffat Tunnel, December 17, 1927.

A UP train exiting the six-mile-long Moffat Tunnel at Winter Park, Colorado in 2005. Photo by Christopher Ness.

By The original uploader was Luxomni at English Wikipedia - Transferred from en.wikipedia to Commons. Transfer was stated to be made by User:TCY., CC BY-SA 3.0, https://commons.wikimedia.org/w/index.php?curid=3255621

Two different postcards featuring the same shot of the California Zephyr entering the East Portal of the Moffat Tunnel. 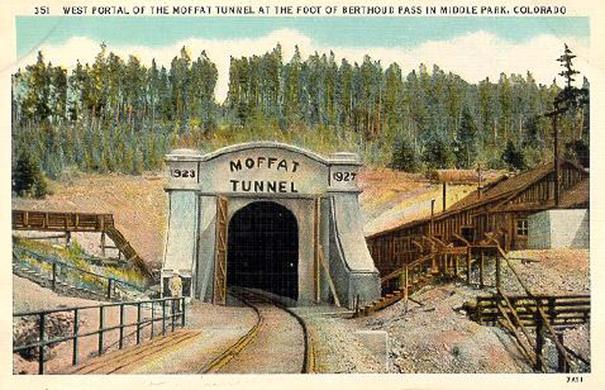 Postcard depiction of the West Portal of the Moffat Tunnel. 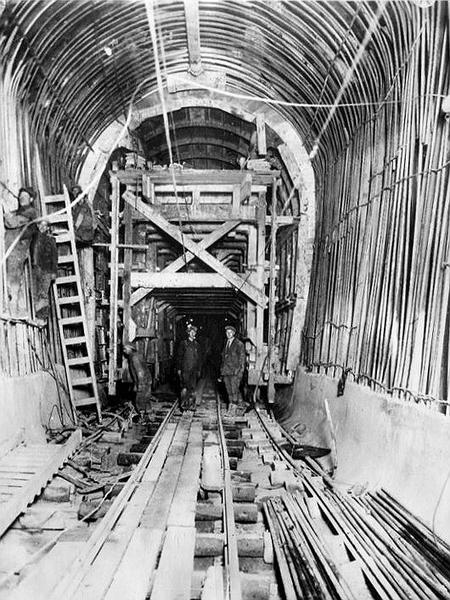 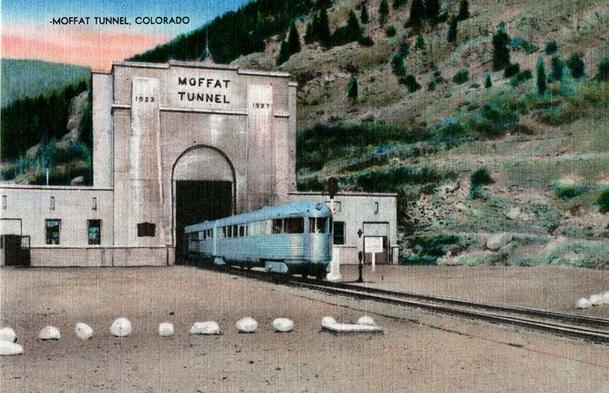 A Denver and Rio Grande Western train exits the East Portal of the 6.2-mile Moffat Tunnel. 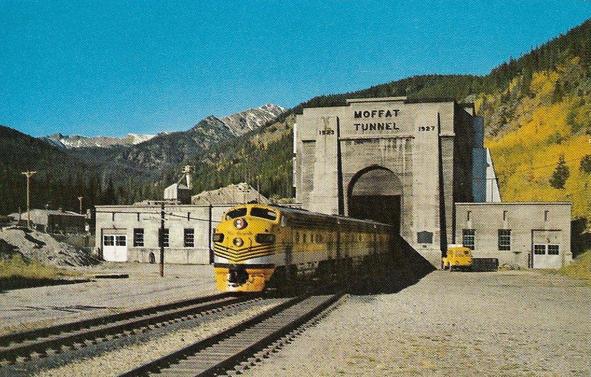 Postcard depiction of the last car on the California Zephyr entering the East Portal of the Moffat Tunnel.

Map of the Moffat Tunnel and the old route over the Rollins Pass. 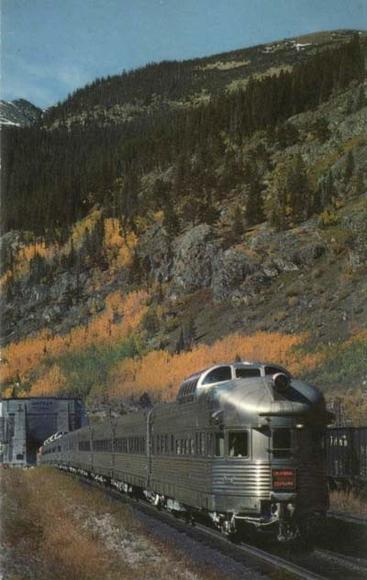