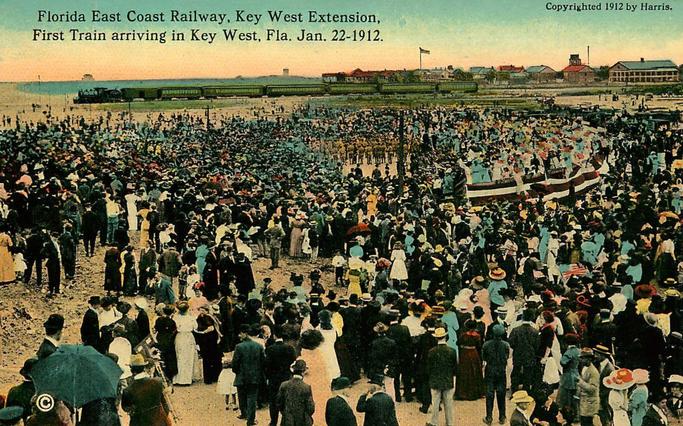 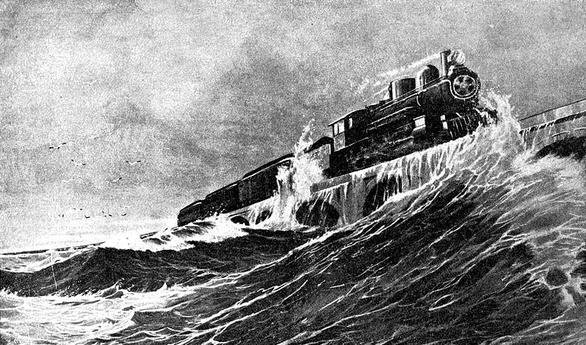 Crossing a bridge on the Overseas Railroad during a storm, May 1915. 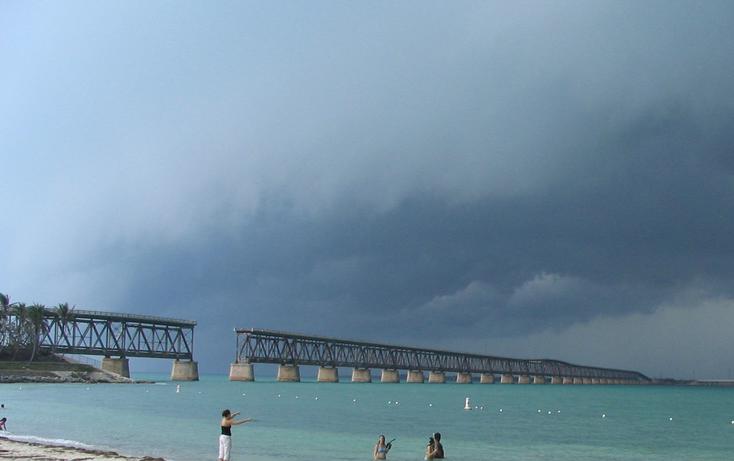 Map of the Overseas Railroad. 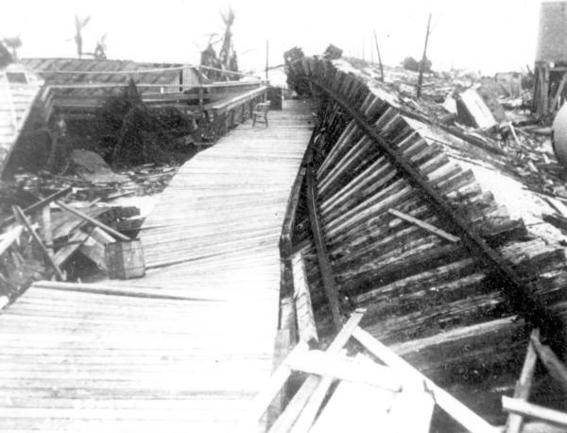 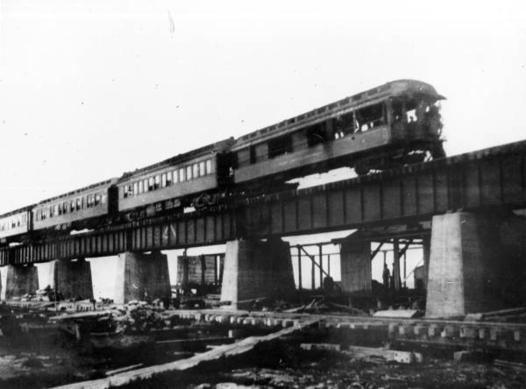 Remains of the Long Key Fishing Camp and a portion of the Flagler Railroad, after the hurricane in 1935.  The lodge originally included an office, recreation and dining rooms downstairs, and a hotel upstairs. It, along with 17 cottages, a post office and a railroad station, were all demolished by 180-plus MPH winds.  In the wake of this hurricane and the destruction of some 30 miles of Henry Flagler's railroad tracks, Flagler's interests offered right-of-way to the state of Florida. Three years after the storm, the railroad bed became the Overseas Highway.  Archives of Florida, Florida Memory

Henry Flagler and the origin of the Florida East Coast Railway
Henry Flagler (1830–1913) was a principal in Rockefeller, Andrews & Flagler and later a founder of Standard Oil during the Gilded Age in the United States. The wealthy man took an interest in Florida while seeking a warmer climate for his ailing first wife in the late 1870s. Returning to Florida in 1881, he became the builder and developer of resort hotels and railroads along the east coast of Florida.

Key West Extension
After the United States announced in 1905 the construction of the Panama Canal, Flagler became particularly interested in linking Key West to the mainland. Key West, the United States' closest deep-water port to the Canal, could not only take advantage of Cuban and Latin American trade, but the opening of the Canal would allow significant trade possibilities with the West Coast.

Initially called "Flagler's Folly", the construction of the Overseas Railroad required many engineering innovations as well as vast amounts of labor and monetary resources. Once the decision was made to move forward with the project, Flagler sent his engineer William J. Krome to survey potential routes for the railroad. The initially favored route extended the railroad from Homestead southwest through the Everglades to Cape Sable, where it would then cross 25 miles of open water to Big Pine Key and then continue to Key West. However, it was quickly determined that it was more feasible to run the railroad south to Key Largo and follow the islands of the Florida Keys. Krome then surveyed routes to Key Largo, including one over Card Point (which would become the first roadway to the Keys) and Jewfish Creek, which was the selected route.

At one time during construction, four thousand men were employed. During the seven year construction, three hurricanes—one in 1906, 1909, and 1910—threatened to halt the project. The project cost was more than $50 million.

Despite the hardships, the final link of the Florida East Coast Railway to Trumbo Point in Key West was completed in 1912. In that year, a proud Henry Flagler rode the first train into Key West aboard his private railcar, marking the completion of the railroad's oversea connection to Key West and the linkage by railway of the entire east coast of Florida. It was widely known as the "Eighth Wonder of the World".

Demise
Much of the Overseas Railroad in the Middle Keys was heavily damaged and partially destroyed in the Labor Day Hurricane of 1935, a Category 5 hurricane which is often called "The Storm of the Century". The September 2, 1935, storm killed more than 400 people and devastated Long Key and adjacent areas. The FEC's Long Key Fishing Camp was destroyed, as was an FEC rescue train which, with the exception of steam locomotive 447, was overturned by the storm surge at Islamorada. Over 40 miles of track were washed away by the hurricane, two miles of which ended up washing ashore on the mainland at Cape Sable.

Already bankrupt, the Florida East Coast Railway was financially unable to rebuild the destroyed sections. The roadbed and remaining bridges were sold to the State of Florida, which built the Overseas Highway to Key West, using much of the remaining railway infrastructure. Many of the original bridges were replaced during the 1980s. The Overseas Highway (U.S. 1, which runs from Key West to Fort Kent, Maine) continues to provide a highway link to Key West. Many old concrete bridges of the Overseas Railroad remain in use as fishing piers and pedestrian paths called the Florida Keys Overseas Heritage Trail.

It was added to the National Register of Historic Places in 1979 as Overseas Highway and Railway Bridges.