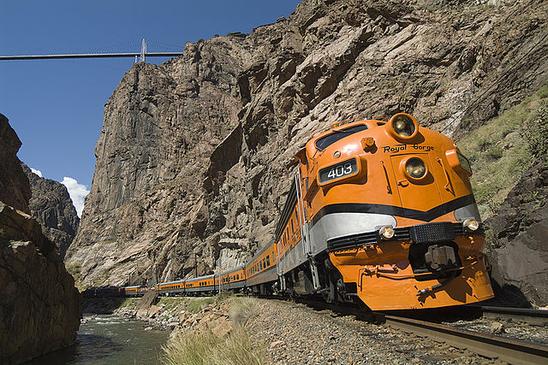 History
In the late 1870s, miners descended on the upper Arkansas River valley of Colorado in search of carbonate ores rich in lead and silver. The feverish mining activity in what would become the Leadville district attracted the attention of both the Rio Grande and Santa Fe railroads, each already having tracks in the Arkansas valley. The Santa Fe had tracks in Pueblo and the D&RG had tracks near Cañon City, Colorado, some 35 miles (56 km) west. Leadville was over 100 miles (160 km) away through the "Grand Canon of the Arkansas," a mountain valley 50 miles (80 km) in length at a consistent and railroad-friendly water grade of one per cent.

For two railroads to occupy a river valley ordinarily was not a problem, however, west of Cañon City the Arkansas River cuts through the Royal Gorge, a high plateau of igneous rocks forming a spectacular steep-walled gorge over 1,000 feet (300 m) deep and 6 miles (9.7 km) long. At its narrowest point sheer walls on both sides plunge into the river, creating a nearly impassable barrier. Sharing is not an option along this route.

On April 19, 1878, a construction crew from the Santa Fe's proxy Cañon City and San Juan Railroad, hastily assembled from sympathetic local citizens, began grading for a railroad line just west of Cañon City in the mouth of the gorge. The Rio Grande, whose track ended 0.75 miles (1.21 km) from downtown Cañon City, raced crews to the same area, but they were blocked by Santa Fe graders in the narrow canyon. By a few hours they had lost the first round in what became a two-year struggle between the two railroads that would be known as the Royal Gorge War. Temporary injunctions forbidding further construction were filed in the Colorado courts and soon moved to the federal courts, each company claiming prior right to use of the gorge.

The Royal Gorge War
On August 23, 1878, the United States Circuit Court for the District of Colorado found in favor of the Santa Fe and its proxy, the Cañon City and San Juan Company, allowing construction of a railroad through the first 20 miles (32 km) of the 50 miles (80 km) long canyon, which includes the Royal Gorge. The Rio Grande was given secondary rights to lay track provided such did not interfere with Santa Fe interests, and it was given rights to use Santa Fe tracks where the gorge was too narrow to construct its own line.

The Rio Grande promptly appealed the decision to the United States Supreme Court and immediately began work to finish a line in the upper 30 miles (48 km) of canyon. The Santa Fe opposed this move by attempting to lay track in the upper canyon for its subsidiary Pueblo and Arkansas Valley Railroad. Santa Fe resorted to its larger corporate power and announced it would build standard gauge tracks parallel to and in competition with all existing narrow gauge D&RG lines. The bondholders of the D&RG, fearing financial ruin from this threat, pressured Rio Grande management to lease the existing railroad to the Santa Fe.

An end to the struggle appeared to be at hand when the companies reached agreement on the proposed lease all of D&RG tracks, equipment, buildings and employees to AT&SF for a 30-year period. The Santa Fe thus gained access to Denver in competition with its transcontinental rivals, the Union Pacific and Kansas Pacific Railroads. The lease went into effect on December 13, 1878 and the Santa Fe soon increased freight rates south of Denver to favor shipping to southern Colorado over its lines to the east, to the detriment of Denver merchants using the leased D&RG lines. By March 1879, with allegations that all of its provisions were being violated by the Santa Fe, the Rio Grande sought to break the lease.

During this period, Santa Fe moved to finish construction of the railroad through the gorge itself while the Rio Grande continued construction in areas in the canyon west of the gorge. Grading crews of both companies were harassed by rocks rolled down on them, tools thrown in the river and other acts of sabotage. Both sides began assembling armed groups of men again to seize and hold strategic points in the gorge in anticipation of a favorable judgment by the Supreme Court. Rio Grande crews built 17 stone "forts" (such as "Fort DeRemer" at Spike Buck near Texas Creek, Colorado) to block the encroachments and keep the CC&SJ crews bottled up in the gorge.

After months of shrinking earnings from their leased railroad, Rio Grande management went to court to break the lease. While lawyers argued their case before the court, armed men hired by Santa Fe took control of Rio Grande stations from Denver to Cañon City, led by Bat Masterson, the sheriff of Ford County, Kansas at the time, ostensibly hired to assemble a "posse" to defend their interests. Masterson enlisted the help of Doc Holliday to assemble 33 recruits, among them the notorious gunfighters “Dirty” Dave Rudabaugh, Josh Webb, Ben Thompson, and “Mysterious” Dave Mather. On April 21, 1879, the Supreme Court granted the D&RG the primary right to build through the gorge on the basis that the lower courts had erred in not recognizing that it had been granted prior right to use of the entire 50-mile in 1872 by an Act of Congress. Masterson's posse returned to Kansas but the validity of the lease remained an issue to be settled.

In early June 1879, when it appeared the issue was about to be resolved in favor of the Rio Grande, Masterson hurriedly returned by special train with 60 men, taking up a key position at the defensible Santa Fe roundhouse in Pueblo. An injunction on June 10, 1879, from a local court restraining the Santa Fe from operating on Rio Grande track sparked an armed retaking of their railroad the next day by Rio Grande crews. Robert F. Weitbrec, former construction foreman and now treasurer of the company, and chief engineer John A. McMurtrie brought 100 men to Pueblo. They met with Pueblo County Sheriff Henly R. Price and Town Marshal Pat Desmond on the best means to serve the writ and dispossess Masterson's men of the roundhouse. Weitbrec suggested they "borrow" a cannon from the state armory only to find that Masterson had already taken it and reportedly trained it from the roundhouse down the street approach. McMurtrie and Desmond gathered 50 Rio Grande men in front of the Victoria Hotel and distributed rifles and ammunition. They marched to the railroad platform, broke down the door to the telegraph office, and when shots were fired, Masterson's men fled through the back windows, cutting him off from any communication with his employers. Supposedly when confronted with the re-borrowed cannon, Masterson's men surrendered the roundhouse.

Despite accounts in partisan secondary sources reporting deaths at the hands of the rival company's men, there is no reliable proof that anyone was actually killed. The federal courts forced the D&RG to return the property it had illegally seized and ordered it into receivership. However in the fall of 1879 railroad "robber baron" Jay Gould of the Kansas Pacific Railroad loaned the D&RG $400,000, bought a 50% interest in the company and announced the intention of completing a rail line from St. Louis to Pueblo to compete with the Santa Fe.

After the Royal Gorge War
In the end, the warring companies settled out of court. On March 27, 1880, the two railroads signed what was called the "Treaty of Boston" (Boston being the corporate home of the Santa Fe) which ended all litigation and gave the D&RG back its railroad. The D&RG paid the Santa Fe $1.8 million (which included a $400,000 "bonus" over actual costs) for the railroad it had built in the gorge, the grading it had completed, materials on hand, and interest. Gould's plans for competitive lines and a proposed line through Raton Pass southward into New Mexico, were cancelled by the Rio Grande. D&RG construction resumed, and rails reached Leadville on July 20, 1880.

In 1997, Union Pacific was persuaded to sell the 12 miles (19 km) of track through the Royal Gorge in an effort to preserve this scenic route. Two new corporations, the Cañon City & Royal Gorge Railroad (CC&RG) and Rock & Rail, Inc. (R&R), joined together to form Royal Gorge Express, LLC (RGX) to purchase the line. Passenger service on the new Royal Gorge Route Railroad began in May 1999. Train movements are still controlled by the Union Pacific’s Harriman Dispatching Center in Omaha, Nebraska. Except for this section of track, the Tennessee Pass line remains dormant.

Hanging Bridge
A highlight of the gorge route is the 1879 hanging bridge located along the north side where the gorge narrows to 30 feet (9.1 m) and the sheer rocks walls plunge into the river. Designed by Kansas engineer C. Shallor Smith and built by Santa Fe construction engineer A.A. Robinson for $11,759, the bridge consists of a 175-foot (53 m) plate girder suspended on one side under A-frame girders that span the river and are anchored to the rock walls. Strengthened over the years, the bridge remains in service today.

On June 11, 2013, a wildfire broke out near the Royal Gorge Bridge and Park that ultimately destroyed 48 of 52 buildings in the park on both sides of the gorge. The bridge was only lightly damaged with some scorched planks requiring replacement. The park was rebuilt and opened again on August 30, 2014.

In the summer months, rafting is a very popular activity in the Royal Gorge. Tourists travel from around the world to tackle the Class IV rapids of the Arkansas River and enjoy the scenery of the gorge. Named rapids in the gorge include Sunshine Falls, Sledgehammer, Wallslammer, Corkscrew, the Narrows, Boateater and Soda Pop Rock. River recreation in the gorge is regulated by Arkansas Headwaters Recreation Area (AHRA) and daily user fees are required to launch at all of the recreation sites upstream of the gorge. There are many commercial rafting companies which are licensed by AHRA to run the gorge and summer weekends can see hundreds of rafts packing the river.

BASE jumping, bungee jumping and rock climbing are generally not permitted at the Royal Gorge. Occasionally, during special events such as the GoFast Games, bridge jumps have been allowed by the city and the lessee of the bridge and park. 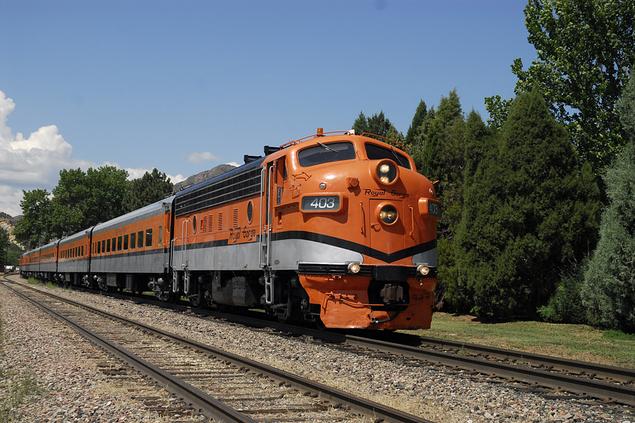 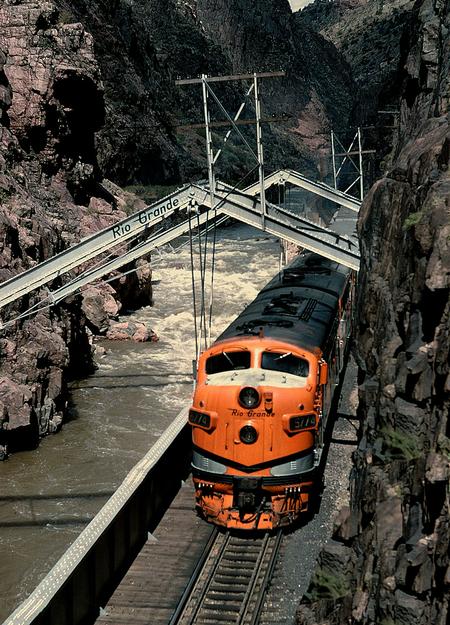