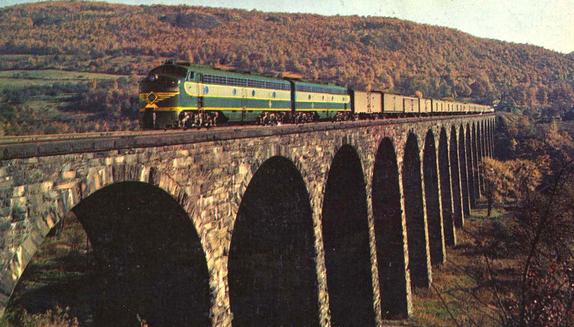 Starrucca Viaduct
Starrucca Viaduct is a stone arch bridge that spans Starrucca Creek near Lanesboro, Pennsylvania, in the United States. At the time of its construction, the bridge was thought to be the most expensive railway bridge in the world, at a cost of $320,000 (equal to $8,857,846 today). It was the largest stone rail viaduct in the mid-19th century and is still in use.

Construction
The bridge was designed by Julius W. Adams and James P. Kirkwood and built in 1847-1848 by the New York and Erie Railroad, of locally-quarried random ashlar bluestone, except for three brick interior longitudinal spandrel walls and the concrete base of the piers. This may have been the first structural use of concrete in American bridge construction.

The viaduct was built to solve an engineering problem posed by the wide valley of Starrucca Creek. The railroad initially considered building an embankment, but abandoned the idea because it was impractical. The Erie Railroad was well-financed by British investors, but even with money available, most American contractors at the time were incapable of the task. Julius W. Adams, the superintending engineer of construction in the area, hired James P. Kirkwood, a civil engineer who had previously worked on the Long Island Rail Road. Accounts differ as to whether Kirkwood worked on the bridge himself, or whether Adams was responsible for the plans with Kirkwood working as a subordinate. The lead stone mason, Thomas Heavey, an Irish immigrant from County Offaly, had worked on other projects for Kirkwood, primarily in New England. It took 800 workers, each paid about $1 per day, equal to $27.68 per day today, to complete the bridge in a year. The falsework for the bridge required more than half a million feet of cored and hewn timbers.

The original single broad gauge track was replaced by two standard gauge tracks in 1886. The roadbed deck under the tracks was reinforced with a layer of concrete in 1958.

The bridge has been in continual use for more than a century and a half, and is still in use by the Norfolk Southern Railway. In 2005 Norfolk Southern leased the portion of the line from Port Jervis, New York to Binghamton, New York to the Delaware Otsego Corporation, which operates it under the name Central New York Railway. The only railroad currently using it is DO's New York, Susquehanna and Western Railway.

The viaduct is listed on the National Register of Historic Places and is a Historic Civil Engineering Landmark.

Disposition: Still in regular use