By Bavareze [CC0], via Wikimedia Commons 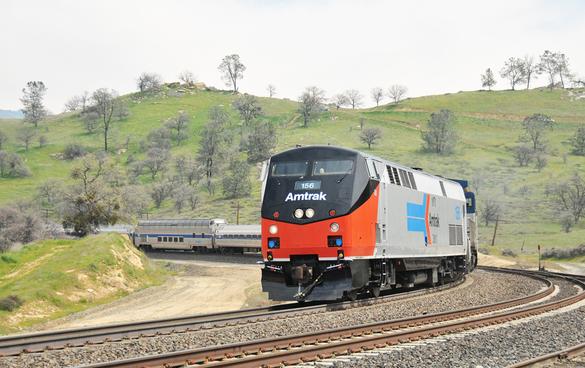 A Santa Fe train negotiates Tehachapi Loop eastbound. It crosses over itself at tunnel 9 in this April 1987 photo. 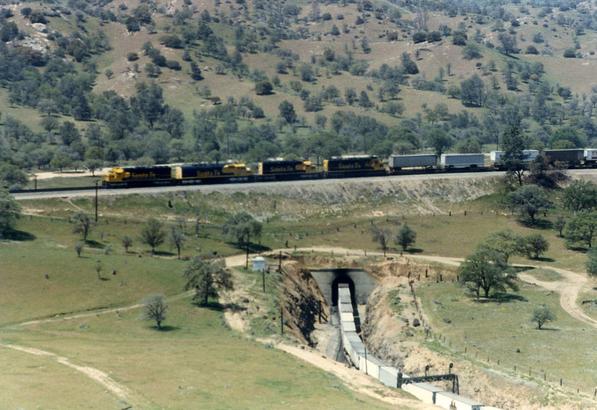 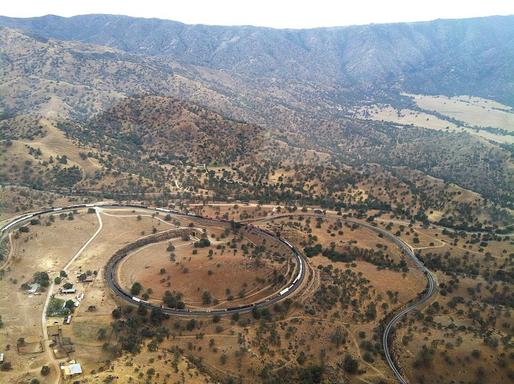 A negative image of the Pictorial Cancellation stamp celebrating the 129th anniversary of the Tehachapi Loop by the United States Postal Service in Keene, CA.

The Tehachapi Loop
The Tehachapi Loop is a 0.73-mile (1.17 km) long spiral, or helix, on the Union Pacific Railroad Mojave Subdivision through Tehachapi Pass, of the Tehachapi Mountains in Kern County, south-central California. The line connects Bakersfield and the San Joaquin Valley to Mojave in the Mojave Desert. The line, which sees an average of almost 40 trains each day, is one of the busiest single-track mainlines in the world.

With its frequent trains and spectacular scenery, the Loop is one of the prime railfan areas in the country. In 1998, the Loop was named a National Historic Civil Engineering Landmark and is designated California Historical Landmark No. 508.

History
One of the engineering feats of its day, the Loop was built by Southern Pacific Railroad to ease the grade over Tehachapi Pass. Construction began in 1874, and the line opened in 1876. Contributors to the project's construction include Arthur De Wint Foote and the project's chief engineer, William Hood.

Rising at a steady 2% grade, the track gains 77 feet (23 m) in elevation in the Loop. A train more than 4,000 feet (1,200 m) long passes over itself going around the loop. At the bottom of the loop, the track passes through Tunnel 9, the ninth tunnel built as the railroad worked from Bakersfield.

The siding on the loop is known as Walong after Southern Pacific District Roadmaster W. A. Long.

A large white cross, "The Cross at the Loop", stands atop the hill in the center of the loop in memory of two Southern Pacific Railroad employees killed on May 12, 1989, in a train derailment in San Bernardino, California.

A railroad museum stands in the nearby town of Tehachapi.

The Loop became the property of the Union Pacific in 1996, when it absorbed the Southern Pacific. Trains of the BNSF Railway also use the loop under trackage rights. Union Pacific bars passenger trains from the line, which prevents Amtrak's San Joaquin train from serving Los Angeles (passengers instead must board Amtrak Thruway Motorcoaches to connect from Bakersfield to Los Angeles). This has been the case since the creation of Amtrak in 1971. An exception is made for the Coast Starlight, which uses the line as a detour if its normal route is closed.

AMTK 156 in its retro paint scheme seen on the Tehachapi Loop with a Pacific Rail Society special bound for Bakersfield April 2nd, 2011. Photo by Drew Jacksich.

A panoramic view of the Tehachapi Loop looking NW.

By Dicklyon at English Wikipedia - Transferred from en.wikipedia to Commons., Public Domain, https://commons.wikimedia.org/w/index.php?curid=8134710