The locomotive Reuben Wells of 1868 on display at the The Children's Museum of Indianapolis.

A Rogers-built Decapod of the Burlington and Missouri River Railroad, circa 1893. 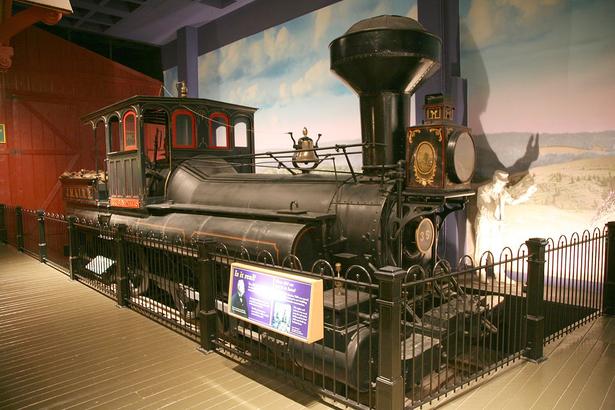 Diagram of the 0-10-0 Wheel Arrangement: five large driving wheels joined together by a coupling rod. 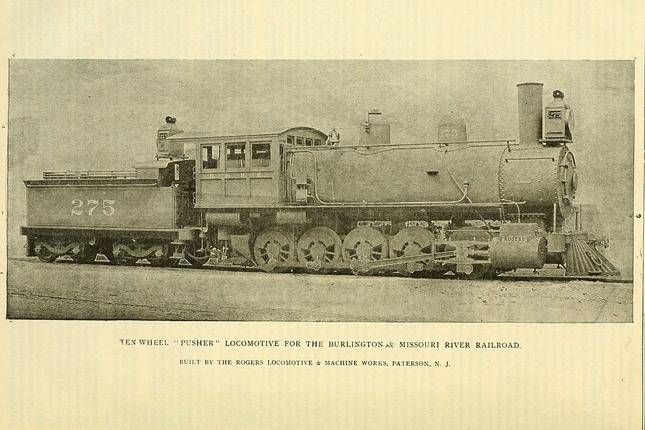 An 0-10-0 "Decapod" Switching Engine of the Lake Shore and Michigan Southern Railway, circa 1907.

0-10-0 "Decapod" Steam Locomotive
Under the Whyte notation for the classification of steam locomotives, 0-10-0 represents the wheel arrangement of no leading wheels, ten powered and coupled driving wheels on five axles and no trailing wheels. In the United Kingdom, this type is known as a Decapod, a name which is applied to 2-10-0 types in the United States. In America, a 0-10-0 is known as a Wells Type named after the Reuben Wells locomotive of 1868.

The lack of leading and trailing wheels makes this wheel arrangement unstable at speed, and it is a type usually confined to fairly low-speed work, such as switching, transfer runs, slow-speed drag freight, or running over mountainous terrain.

The Russian E class 0-10-0 was the most numerous single class of locomotive in the world, with around 11,000 manufactured.

Usage
United States of America
The 0-10-0 was not very popular in the United States and North America in general and probably fewer than fifty of this type were constructed. For switching work, large 0-8-0 locomotives were preferred, and when more than four driven axles were required, the preference was for articulated locomotives such as 0-6-6-0 and 0-8-8-0 Mallet engines. On mainlines, a 2-10-0 with the added stability of its leading truck, or a 2-10-2 or 2-10-4 with room for larger fireboxes, were preferred.

The first 0-10-0 in the United States was built to provide service on Madison Hill which, at 5.89%, has the steepest standard gauge grade in the country. It was a tank locomotive, designed in 1868 by Reuben Wells for the Jeffersonville, Madison and Indianapolis Railroad and named for its designer. The Reuben Wells is on display at the Children's Museum of Indianapolis. It is 35 ft (10,668 mm) long and weighs 55 tons.

Later 0-10-0 versions were delivered in 1891 to the St. Clair Tunnel Company to haul trains between Sarnia, Ontario and Port Huron, Michigan. The next were a series of 21 locomotives for New York Central Railroad and its subsidiaries for hump yard work. Others included seven owned by Illinois Central Railroad, fifteen by Chesapeake and Ohio Railway, two by Baltimore and Ohio Railroad, and four, the heaviest built, for Duluth, Missabe and Iron Range Railway.

Canada
Three 0-10-0 locomotives were owned by the Canadian Pacific Railway.