2-10-4 "Texas" Steam Locomotive
Under the Whyte notation for the classification of steam locomotives, a 2-10-4 locomotive has two leading wheels on one axle, ten coupled driving wheels on five axles, and four trailing wheels on two axles, usually in a truck. These were referred to as the Texas type in most of the United States, the Colorado type on the Burlington Route and the Selkirk type in Canada.

The 2-10-4 Texas wheel arrangement originated and was principally used in the United States of America. The evolution of this locomotive type began as a 2-10-2 Santa Fe type with a larger four-wheeled trailing truck that would allow an enlarged firebox. A subsequent development was as an elongated 2-8-4 Berkshire type that required extra driving wheels to remain within axle load limits. Examples of both of these evolutionary progressions can be found.

ATSF 2-10-4 No. 5000 Madame Queen
Santa Fe, who had originated the 2-10-4 type, adopted it again in 1930 with no. 5000, nicknamed Madame Queen. This locomotive was similar to the C&O T-1, with the same 69 inches (1,753 millimeters) drivers but with 300 pounds per square inch (2,100 kilopascals) boiler pressure and 60% limited cutoff. It proved the viability of the type on the Santa Fe railway, but the Great Depression shelved plans to acquire more.

In 1938, with the railroad's fortunes improving, Santa Fe acquired ten more 2-10-4 locomotives. These came with 74 inches (1,880 millimeters) diameter drivers and 310 pounds per square inch (2,100 kilopascals) boiler pressure, making these ATSF 2-10-4s the fastest and most modern of all.

Of the original order of ten, five were oil-burning and five coal-burning, but when Santa Fe ordered twenty-five more for delivery in 1944, all were delivered equipped to burn oil. The first of the 1944 batch produced 5,600 drawbar horsepower on road test, the highest figure known for a two-cylinder steam locomotive.

Texas and Pacific
The 2-10-4 type was revived in 1925 by the Lima Locomotive Works. This time it was an expansion of the 2-8-4 Berkshire type that Lima had pioneered. A version of the Berkshire with ten driving wheels instead of eight was an obvious development and the first to be delivered were to the Texas and Pacific Railway, after which the type was subsequently named. The four-wheel trailing truck allowed a much larger firebox and thus a greater ability to generate heat, and thus steam. The Superpower design, as Lima's marketing department called it, resulted in a locomotive that could develop great power at speed while not running out of steam-generating ability.

Chesapeake & Ohio
The early Lima-built Texas types were low-drivered, 60 to 64 inches (1,524 to 1,626 millimeters) in diameter, which did not leave enough space to fully counterweight the extremely heavy and sturdy side rods and main rods required for such a powerful locomotive's piston thrusts. That changed in 1930 on the Chesapeake and Ohio Railway (C&O), who stretched the design of an Erie Railroad high-drivered Berkshire type locomotive to produce forty of the C&O T-1, a Texas type with 69 inches (1,753 millimeter) diameter drivers that was both powerful and fast enough for the new higher-speed freight services that the railroads were introducing. All subsequent Texas types were of this higher-drivered sort.

Pennsylvania
The Pennsylvania Railroad (PRR) ordered few new locomotives after 1930, since electrification both consumed the railroad's resources and resulted in a supply of excess steam locomotives that eliminated any requirement for new power. It was not until the Second World War had begun, that the PRR's locomotive fleet began to appear inadequate. Although the PRR urgently needed new and modern freight power, the War Production Board prohibited working on a new design and, since there was not enough time to trial a prototype in any event, the PRR cast around for other railroads' designs that it might modify for PRR use.

It settled on the C&O’s T-1. Some modifications were made to the design for these PRR War Babies. These included PRR drop-couplers, sheet steel pilots, PRR-style cabs, large PRR tenders, Keystone number plates up front and other modifications. It still betrayed its foreign heritage by lacking the PRR trademark Belpaire firebox and by having a booster engine on the trailing truck. Altogether 125 locomotives were built between 1942 and 1944 and became the largest fleet of Texas type locomotives in existence. All were eventually sold as scrap when the Pennsylvania Railroad dieselized.

Canada
The Canadian Pacific (CP) Selkirk locomotives were all built by Montreal Locomotive Works (MLW). The first twenty of these large engines were built in 1929, designated T1a class and allocated numbers 5900 to 5919. Their Canadian type name was after the Selkirk Mountains across which they were placed in service, the railway summit of which was located just inside the western portal of the Connaught Tunnel beneath Rogers Pass.

MLW built another ten of these successful locomotives for CP during November and December 1938, designated T1b class and numbered from 5920 to 5929. Modifications to the original design led to the T1b being ten tons lighter while its operating steam pressure was increased from 275 to 285 pounds per square inch (1,900 to 1,970 kilopascals).

A further six Selkirks, classed T1c and numbered from 5930 to 5935, were delivered by MLW in 1949. They were the last standard gauge steam locomotives to be built in Canada for a Canadian railway. These were very similar to the T1b class, apart from a few refinements which included two cross-compound air compressors to speed up recharging of the air brake system, while some small streamlining touches were not retained, such as the streamlined casing around the smokebox stack as well as the teardrop shape of the classification lights. In addition, the inside of the cabs were no longer insulated in the same manner as the previous versions, which had provided better cold-weather cab insulation and were better-liked by crews. The last Selkirks were taken out of service in 1959.

Nickname: Texas
Notes: 18 of the B&LE's 2-10-4 locomotives were sold to the Duluth, Missabe & Iron Range (DMIR), who retained the "Texas" class name on these locomotives. 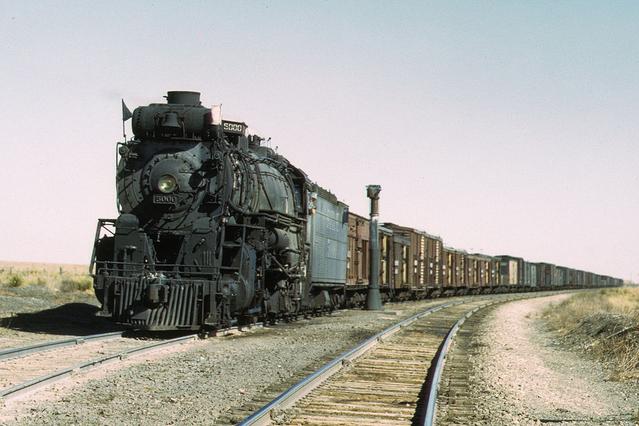 Diagram of the 2-10-4 Wheel Arrangement: one small leading wheel, five large driving wheels joined together with a coupling rod, and two small trailing wheels. Front of locomotive at left.